Argentina is embracing hydraulic fracturing as a means of exploiting its large unconventional gas reserves. 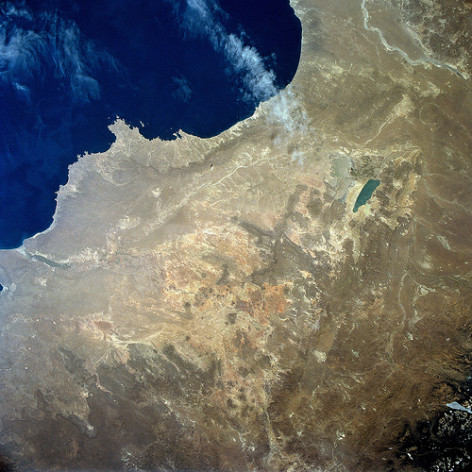 Satellite image of San Jorge Gulf, in the Patagonia region of Argentina, where there are huge reserves of shale gas. Credit: IPS/Photostock

BUENOS AIRES, Apr 30 2013 (IPS) - The enthusiasm of the government and oil and gas companies over Argentina’s unconventional fuel potential has come up against fierce opposition from communities living near the country’s shale gas reserves and environmental organisations.

Indigenous communities, other nearby residents, academics and environmentalists are deeply concerned about the risks of disastrous environmental damage entailed by the hydraulic fracturing or “fracking” required to extract the country’s significant reserves of shale gas.

Unlike the gas and oil that can be obtained by merely extracting them from deposits where they are found in a more or less pure state, the gas and oil trapped in shale, slate and tar sands, among other formations, require more costly and contaminating techniques.

To extract the gas, the shale rock is fractured by injecting huge amounts of water and chemicals at extremely high pressure through horizontal perforations up to several kilometres in length.

Fracking is a highly controversial issue in the United States and Canada and has been banned in France and Bulgaria, but is moving forward in Argentina, which is believed to offer enormous shale gas potential.

Diego di Risio of the Oil Observatory of the South told Tierramérica* that “the environmental impact of unconventional technologies is far greater than that of traditional technologies,” for reasons that include the large areas affected and the massive volumes of water used.

Other organisations, such as the Ecosur Foundation and Plataforma 2012, warn of the danger of the expansion of this type of oil and gas drilling without serious debate regarding its risks.

Last year, the Oil Observatory published a study, “Fractura expuesta. Yacimientos no convencionales en Argentina” (Fracture Exposed: Unconventional deposits in Argentina), which describes the use of chemical products during the fracking process that could contaminate groundwater and aquifers.

Moreover, the exploitation of unconventional reserves contributes to further postponing debate on “the need for the diversification of the energy mix” in Argentina, which currently depends on oil and gas for almost 90 percent of its energy needs, and is expanding the hydrocarbon frontier into agricultural areas, the study warns.

The 2013-2017 Strategic Management Plan of YPF, the oil and gas company fully nationalised in 2012 by the government of President Cristina Fernández de Kirchner, states that Argentina is the country with the third greatest potential for unconventional gas, after China and the United States.

In fact, the first multi-fracture horizontal well in South America was drilled in 2008 in the territory of a Mapuche indigenous community in the southern Argentine province of Neuquén, without the consent of the local inhabitants.

The company heading up the operation is Apache, a U.S.-based corporation that has acquired huge tracts of land in the area. The community of Gelay Ko (“without water”, in the Mapuche language) is located over the Zapala aquifer and is made up of around 40 families. Their homes are surrounded by wells drilled by Apache for shale gas extraction.

In 2012, after filing a legal suit over the company’s failure to consult with the community and prepare an environmental impact assessment, a group of community members occupied Apache’s installations, but their protest was quashed and they were slapped with a countersuit.

The protest was headed up by 30-year-old lonko (traditional chief) Cristina Lincopán, who died a month ago from pulmonary hypertension, reported Leftraru Nawel of the Neuquén Mapuche Confederation.

“On top of the death of animals, which was already happening when there was only conventional drilling, now we are seeing impacts on the health of the population, because they burn gas there, very close to the people’s homes,” Nawel told Tierramérica.

In Gelay Ko as in other Mapuche communities in Neuquén, water is becoming increasingly scarce and saline, to the point where the authorities are now distributing bottled water, he explained. But Apache uses millions of litres of the vital resource for fracking.

“People are worried about the contamination of the Zapala aquifer, which has been declared a natural reserve by the municipality, because the possible extent of contamination is still not known,” said Nawel.

“The problem is not just the amount of water they use – and we don’t know where they get it from. They add chemical products and no one knows what they are because that information is protected under patent,” he said.

“No one knows what they do with the waste water, either. In the United States they re-inject it into inactive wells, without sealing them or anything. In Neuquén there is no technology for the treatment of this type of waste,” he added.

Apache’s operations are located in the vast shale field of Vaca Muerta, which covers two thirds of Neuquén and part of neighbouring provinces, and is considered to contain Argentina’s largest unconventional gas reserves.

In the last two years, fracking technology has also advanced in other regions of the country. In February, the president inaugurated new exploration activities in the southern province of Chubut.

In this province of scarce water resources, attorney Silvia de los Santos, on behalf of local indigenous communities, filed for an injunction against exploration in Aguada Bandera, located 200 kilometres from the city of Comodoro Rivadavia, and in D-129, on the coast of San Jorge Gulf.

De los Santos filed for the injunction on the eve of the initiation of these exploration activities, on the grounds of irregularities in the permit application and environmental impact assessment. But she did not succeed in stopping them.

YPF president Miguel Galuccio announced that San Jorge could represent the most important source of shale gas after Vaca Muerta. In both cases, these are conventional gas fields that also contain unconventional reserves.

In the meantime, areas where there has been no oil and gas industry activity until now are also being eyed as potential sites for exploration and extraction, such as Los Monos in the northwestern province of Salta and another field in the northeastern province of Entre Ríos.

Beneath the soil of Entre Ríos and other provinces on the Argentine coast, as well as part of Uruguay, Paraguay and southern Brazil, lies the Guaraní aquifer, an enormous freshwater reserve that supplies drinking water to a large number of cities in the region.

“Entre Ríos did not form part of Argentina’s oil and gas map, but with this new technology there has been a shift towards this area, and now environmental organisations are calling for some kind of moratorium or prohibition on fracking there,” said Di Risio.

In the southern province of Río Negro, environmentalists and local residents have been meeting to exchange information and take action against the expansion of fracking in the region of Allen, where Apache is also operating.

The drilling is being done very close to fruit tree orchards, say local farmers, who are concerned over the impacts and the lack of control over the disposal of the liquid waste generated by these operations.

In the Río Negro municipality of Cinco Saltos, an ordinance was passed to ban fracking, but this was vetoed a short time later by the municipal government, and the legislative assembly subsequently upheld the veto.