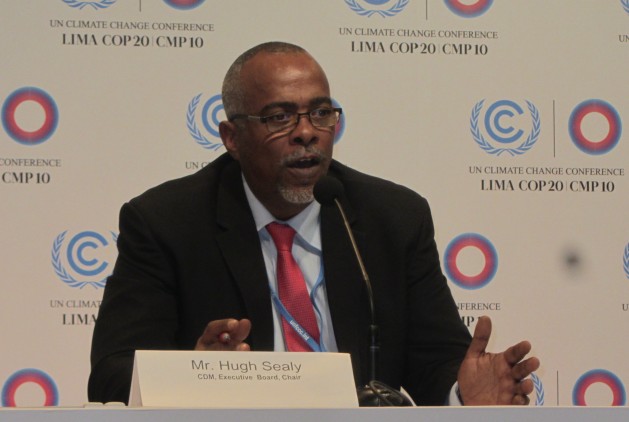 “The big picture is that the CDM is at a crossroads. The markets have collapsed” – Hugh Sealy, CDM Executive Board Chair. Credit: Wambi Michael/IPS

LIMA, Dec 4 2014 (IPS) - The U.N. mechanism for supporting carbon emissions projects in developing countries – the Clean Development Mechanism (CDM) – is in crisis as a result of a dramatic slump in the prices being paid for carbon credits.

The CDM, which deals in Certified Emission Reductions (CERs), is faced with possible collapse because demand in recent years from the principal buyers – countries tasked with emission reduction obligations under the Kyoto Protocol – has dropped, because emission reduction targets have not risen significantly and because economic growth has slowed.

“The mechanism [Clean Development Mechanism] has so far led to the registration of 7,800 projects and programmes across 107 developing countries with hundreds of billions of dollars in investment, resulting in 1.5 billion fewer tonnes of greenhouse gases entering the atmosphere” – Hugh Sealy, CDM Executive Board Chair

The CDM Executive Board and its members at the ongoing (Dec. 1-12) U.N. Climate Change Conference in Lima, Peru, have been trying to convince negotiators there to renew their commitment to the mechanism, which has existed for the last ten years. Hugh Sealy, Chair of the CDM, answered questions from IPS on what has gone wrong and what needs to be done.

Q:  Can you give us the big picture of the Clean Development Mechanism today?

A:  The big picture is that the CDM is at a crossroads. The markets have collapsed. The price of CERs has fallen to about 0.30 a dollar compared with over 30 dollars five years ago.

Q:  What has been achieved so far?

A:  The mechanism has so far led to the registration of 7,800 projects and programmes across 107 developing countries with hundreds of billions of dollars in investment, resulting in 1.5 billion fewer tonnes of greenhouse  gases entering the atmosphere.

Q:  Where was the problem for the CDM?

A:  The beginning of the trouble for the CDM – and this is my personal feeling – was the European Union’s 2009 directive [to strictly limit the permissibility of international credits and ban them altogether from 2020] which came into effect on Jan. 1, 2013. You have a situation where you have one buyer – the European Union. Japan has decided to create its own system, the JCR, Australia has gone its own way, Canada has gone its own way, and the United States has never bothered either. So if you have system where the European Union as our major buyer is going to exclude all other units, then the market is not going to take a lot of them. And that is when the prices begin to drop.

Q:  So you think you should have had a regulated market for CERs?

A:  A market for CERs, which are not like any other commodity, should have had a floor. While others had a floor for theirs, we never had a floor on ours.  Yet now the World Bank is saying that we should create some sort of market reserve fund that can suck all this excess credit. They say about three billion dollars may be required to suck up this excess. And I don’t see it as a problem of excess CERs. I see it as lack of demand for CERs. I mean, look at all the CERs that we have generated. We have 1.5 gigatonnes of emission reductions. The emissions gap is 10 gigatonnes per year. So to me, the essential and radical demand remains for a market system.

Q:  The CDM Executive board has been fronting voluntary cancelling as a possible option for creating demand for CERS. What is the idea behind that?

A:  The idea is that anyone. Even you as the media, me as an individual, a company, a government can purchase and cancel CERs immediately. But we have no idea what demand we will have for voluntary cancellation. So I cannot tell you that as a result of voluntary cancellation we will see an immediate upsurge in the price of CERs. But we as a board think this is the right thing to do. To make CERs available to anyone who wants to reduce their carbon footprint.

The other thing that we are looking at is what services we provide. And we believe we have a very robust Monitoring, Reporting and Verification (MRV) system for determining actual emission reductions.

And what we see is that a number of financial institutions like the World Bank, the Global Environmental Facility and the Green Climate Fund are allocating quite a bit of their portfolios to what they call performance-based finance or result-based finance. And we are in dialogue with these institutions asking them to use the CDM, use the MRV that we provide, to ensure that the CERs that you put your loans out for are actually achieved.

Q:  That may not take off and possibly is not sustainable. What would be the lasting solution?

A:  We need a clear decision here in Lima, and Paris [in 2015] in particular, as to what the role of an international offset mechanism will be in a new climate regime. We need parties, particularly the developed countries, to raise their level of ambition and to create more demand for CERs. And outside that, we are searching for non-traditional markets through voluntary cancellation.

Q:  What are the implications of this development for least developing countries and least developed small island states?

A:  If I was a developer, and I’m from one of those countries, I would hold on to my CERs. I would not seek to enter a purchase agreement at this time. Not at thirty cents. I’m an optimist. I believe the price of CERs must go up.

There is a fundamental arithmetic that I’m working with and that is that the emissions gap is about ten gigatonnes per year and is only getting wider at this point.  So if countries decide that markets will be vital component of the Paris agreement, then I cannot see how the price of CERs can remain at thirty cents. It can only go up. It is absolutely frustrating for small island states like Jamaica that already have registered CER projects. It is extremely frustrating for countries in Africa.

Q:  If the CDM was to collapse today, what would we lose?

A:  We would lose ten years of experience, ten years of learning by doing. Those who think that they can abandon the CDM and create a new market mechanism in the interim are not facing reality.

It took a very long time to create the CDM and to get it to the stage we are at now.  So my answer to your question is that we will lose quite a lot. I cannot give you a monetary number or a dollar value of what we will all lose in investment. There are over 4,500 organisations in the world that deal with the CDM.

Q:  What can be done by countries at the negotiations going on here in Peru if, in the past, such negotiations have produced a pioneering model like CDM that has to some extent worked as you seem to indicate?

A: They can increase their demand for CERs before 2020, recognise the value that the CDM can add to emerging emissions trading systems, and recognise the mechanism’s obvious value to the international response to climate change after the new agreement takes force in 2020.

This is one of the most effective instruments governments have created under the U.N. Climate Change Convention. It drives and encourages emission reductions, climate finance, technology transfer, capacity-building, sustainable development, and adaptation – everything that countries themselves are asking for from the new Paris agreement.