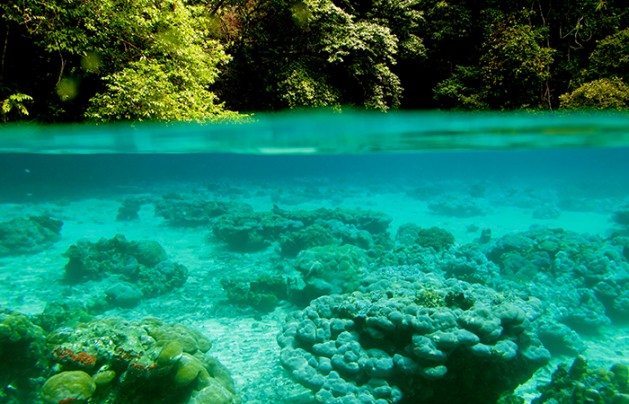 The research team has been studying this relatively acidic coral reef in the Palauan archipelago. Seawater pH on this reef today represents acidification levels predicted for tropical western Pacific by the end of the 21st century. Credit: Tom DeCarlo, Woods Hole Oceanographic Institute

NEW YORK, Feb 6 2015 (IPS) - A recent study suggests that one of the multiple threats to coral reefs contains both the problem and solution.

"Management of a local coral reef, in terms of limiting human nutrient supplies to that coral reef, can actually have real substantial effects over the next century." -- marine researcher Thomas DeCarlo

Coral reefs are animal organisms that are like sea castles, vibrant with algae and home to sponges, mollusks and creatures seeking shelter. In fact, 25 per cent of marine life relies on coral reefs as part of their habitat.

Coral reefs build their skeletons using limestone, or calcium carbonate. The increase of acid in the ocean due to excess carbon dioxide (CO2) in the atmosphere causes the carbonate ion to become less available. Coral reefs rely on carbonate to produce their well-cemented skeletons, which they are doing more slowly.

As a result, the natural equilibrium governing production–erosion of coral reefs has been disrupted in favour of erosion.

To add to the imbalance, the added component of ‘nutrients’ to water accelerates the rate of erosion 10 times.

The interaction between high levels of nutrients with acidity makes the effect of ocean acidification 10 times greater.

‘Nutrients’ refer here to pollution by humans on a local scale.

And herein lies the study’s seed of good news as it says in encouraging terms that “…people can take action to protect their local reefs. If people can limit runoff from septic tanks, sewers, roads, farm fertilizers and other sources of nutrient pollution to the coastal ocean, the bioeroders will not have such an upper hand, and the balance will tip much more slowly toward erosion and dissolution of coral reefs”.

“Reducing erosion by tenfold is major,” he told IPS.

He also explained that coral reefs face both global and local threats, thereby requiring solutions at each level, regardless of whether the global stressors or the local factors, such as overfishing, are paramount (and in fact, both are severe).

“In addressing things like pollutant runoffs that contribute to the local issue of why ocean acidification can be so harmful, what you’re doing is you’re pointing to a local solution to a local problem,” said Eakin.

While the climate change remains a problem of planetary scale, requiring concerted efforts on a cross-national level, the plus-side of local problems is that they can be addressed on a local scale.

“And by doing that what you’re doing is making the reefs more resilient to climate change and ocean acidification. So that better helps them to survive, while we work on getting the global problems under control,” he said.

Thomas DeCarlo is doing his PhD in the joint programme of oceanography between Massachusetts Institute of Technology and WHOI. He led the Woods Hole study.

In an interview with IPS, DeCarlo was asked the extent to which cleaning up waters locally could alleviate the overall strains on coral reef development.

He explained that local action could buffer or limit to some extent the global impact of ocean acidification, which is certain to continue over the next century.

“I guess the source of optimism is that whereas the CO2 ocean acidification problem is really truly global, and that’s a really big problem because reefs can’t really escape that, it’s such a global phenomenon that all coral reefs are going to be seeing this ocean acidification effect.

“But the nutrient problem from human nutrient addition is really a pretty local problem, in a lot of respects so, the optimism is that that can actually be limited and controlled on a local scale, so management of a local coral reef, in terms of limiting human nutrient supplies to that coral reef, can actually have real substantial effects over the next century,” he said.

There is an economic incentive that could help the political agenda bend to the needs of nature, with the total dollar value of coral reef services estimated in the billions annually in the U.S. alone.

Furthermore, coral reefs protect shorelines by absorbing storm energies and perform many other roles in the world as we know it.