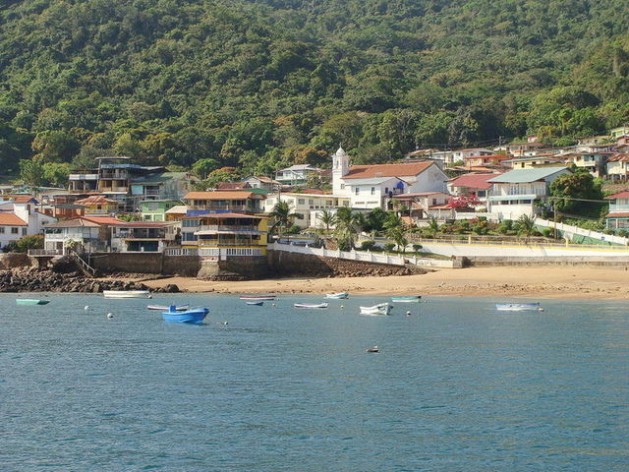 The town of Taboga viewed from the sea. Credit: Creative Commons

TABOGA, Panama, Oct 16 2014 (IPS) - Fermín Gómez, a 53-year-old Panamanian fisherman, pushes off in his boat, the “Tres Hermanas,” every morning at 06:00 hours to fish in the waters off Taboga island. Five hours later he returns to shore.

Skilfully he removes the heads and scales of his catch of sea bass, snapper, marlin and sawfish. He delivers the cleaned fish to restaurants and hotels, where he is paid four dollars a kilo, a good price for the local area.

“I use baited hooks, because trammel nets drag in everything. That’s why the fishing isn’t so good any more: the nets catch even the young fry,” said this father of three daughters, who spent years working on tuna-fishing vessels.

Gómez lives 200 metres from Taboga island’s only beach, in a town of 1,629 people where the brightly painted houses are roofed with galvanised iron sheets. Located 11.3 nautical miles (21 kilometres) from Panama City, the mainstay of the island is tourism, especially on weekends when dozens of visitors board the ferry that plies between the island and the capital twice a day.

Gómez, who comes from a long line of fishermen, tends to go out fishing at midnight, the best time to catch sea bass. On a good day he might take some 30 kilograms.

“The fishing here is good, but we are dependent on what people on the other islands leave for us,” said Gómez, tanned by the sun and salt water.

The island of Taboga, just 12 square kilometres in area, lies in the Gulf of Panama and is the gateway to the Las Perlas archipelago, one of the most important nodes of coral islands in this Central American country of 3.8 million people.

From the air, they appear as mounds emerging from the turquoise backdrop of the sea, surrounded by what look like dozens of steel sharks, the ships waiting their turn to pass through the Panama Canal.

The isthmus of Panama possesses 290 square kilometres of coral reefs, mostly located on the Atlantic Caribbean coast, which harbour some 70 species. Coral reefs in the Pacific ocean host some 25 different species.

What the fisherfolk do not know is that their future livelihood depends on the health of the coral reefs, which is threatened by rising sea temperatures, maritime traffic, pollution and illegal fishing. 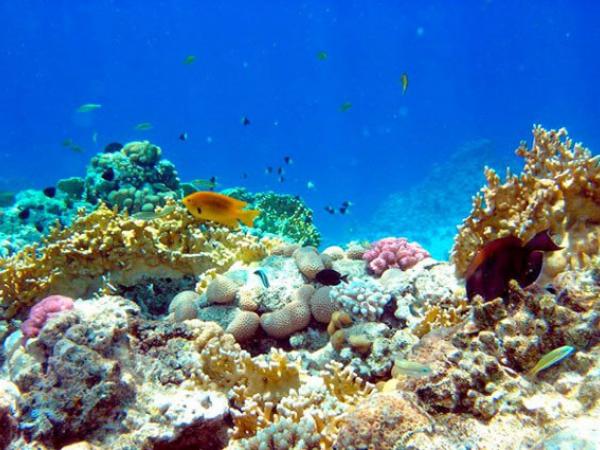 In Coiba National Park, in western Panama, and in the Las Perlas islands, “the diversity of the coral and associated species has been sustained in recent years. We have not detected any bleaching, but a troublesome alga has appeared,” academic José Casas, of the state International Maritime University of Panama (UMIP), told IPS.

“It’s threatening the reef,” said the expert, who is taking part in a project for the study and monitoring of reef communities and key fisheries species in Coiba National Park and the marine-coastal Special Management Zone comprising the Las Perlas Archipelago. The study’s final report is due to be published in November.

Algal growth blocks sunlight and smothers the coral, which cannot survive. Experts have also detected the appearance of algae in Colombia and Mexico.

The project is being carried out by UMIP together with Fundación Natura, Conservation International, the Autonomous University of Baja California, in Mexico, and the Aquatic Resources Authority of Panama (ARAP).

Researchers are monitoring the coral in Coiba and Las Perlas in Panama. They took measurements in March and August, and they will repeat their survey in November.

There are differences between the two study zones. Coiba is little disturbed by human activity; it is a designated natural heritage area and a protection plan is in place, although according to the experts it is not enforced. Moreover, Coiba Park is administered by the National Environmental Authority (ANAM).

A protection programme for Las Perlas, to be managed by ARAP, is currently in the pipeline.

Reefs are essential for the development and feeding of large predators like sharks, whales, pelagic fish such as anchovy and herring, and sea turtles, the experts said.

Fishing generates some 15,000 jobs in Panama and annual production is 131,000 tonnes, according to the National Institute of Statistics and Census.

An Environmental Agenda for Panama 2014-2019 (Agenda Ambiental Panamá 2014-2019), published by the National Association for the Conservation of Nature (ANCON),

This was a finding of a study titled “Forecasting decadal changes in sea surface temperatures and coral bleaching within a Caribbean coral reef,” published in May by the U.S. journal Coral Reefs.
Angang Li and Matthew Reidenbach, of the U.S. University of Virginia, predict that by 2084 nearly all the coral reefs they studied will be vulnerable to bleaching-induced mortality.

They simulated water flow patterns and water surface heating scenarios for the present day and projections for 2020, 2050 and 2080. They concluded that reefs bathed by cooler waters will have the greatest chances of future survival.

Bocas del Toro adjoins the Isla Bastimentos National Park, one of 104 protected areas in Panama covering a total of 36,000 square kilometres, equivalent to 39 percent of the national territory.

The next phase of the corals project, financed with 48,000 dollars this year and requiring about 70,000 dollars for 2015, will involve quantifying the value of ecosystem services provided by coral reefs.

Gómez has no plans to change his trade, but he can see that his grandchildren will no longer follow the same occupation. “Fishing is going to be more complicated in future. They will have to think of other ways of earning a living,” he told IPS, gazing nostalgically out to sea.