Lisa Haugaard is the executive director of the Latin America Working Group (LAWG). Sarah Kinosian is the lead researcher on Latin America at the Security Assistance Monitor (SAM) at the Center for International Policy, and William D. Hartung is a senior advisor to SAM. This article draws upon a new LAWG/CIP report, Honduras: A Government Failing to Protect Its People. 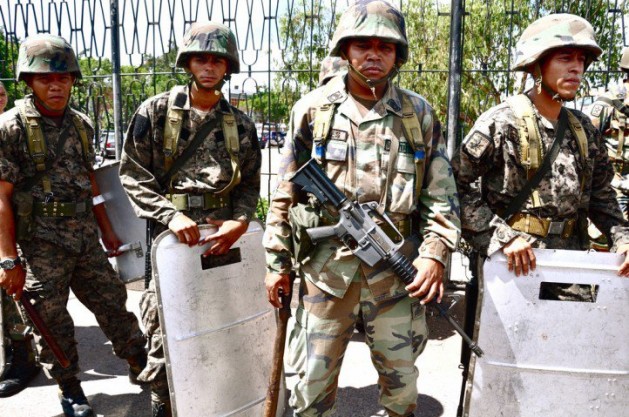 For the fourth year running, San Pedro Sula has been one of the most dangerous places on the planet outside of a war zone. Credit: daviditzi/Flickr

WASHINGTON, D.C., Feb 22 2015 (IPS) - Honduras is one of the most violent nations in the world. The situation in the country’s second largest city, San Pedro Sula, demonstrates the depth of the problem.

For the fourth year running, San Pedro Sula has been one of the most dangerous places on the planet outside of a war zone. Its murder rate in 2014 was an astonishing 171 per 100,000. The city, which is caught in the crossfire between vicious criminal gangs, has been the largest source of the 18,000 Honduran children who have fled to the United States in recent years.

The vast majority of killings in Honduras are carried out with impunity. For example, 97 percent of the murders in San Pedro Sula go unsolved.

Corruption within and abuses by the civilian police undermine its effectiveness. A controversial new internal security force, the Military Police of Public Order (Policia Militar del Orden Publico, or PMOP), does not carry out investigations needed to deter crime and is facing a series of allegations of abuses in the short time it has been deployed. There are currently 3,000 PMOP soldiers deployed throughout the country, but this number is expected to grow to 5,000 this year. The national police feel that the government is starving them for funds and trying to replace them with PMOP.

"The vast majority of killings in Honduras are carried out with impunity."

The rise of PMOP is part of a larger trend toward the militarization of government and civil society. The military is now in charge of most aspects of public security in Honduras. But the signs of militarization are everywhere. Each Saturday, for example, 25,000 kids receive military training as part of the “Guardians of the Homeland” program, which the government says is designed to keep youths age 5-23 from joining the street gangs that control entire sections of the country’s most violent cities.

But putting more guns on the street is unlikely to sustainably stem the tide of violence in Honduras. What would make a difference is an end to the climate of impunity that allows murderers to kill people with no fear of consequences.

“This country needs to strengthen its capacity and will to carry out criminal investigations. This is the key to everything,” said an expert on violence in Honduras who spent years working in justice agencies there, and who spoke on condition of anonymity for reasons of personal safety.

The Honduran government faces three key challenges: It must reform a corrupt and abusive police force, strengthen criminal investigations, and ensure an impartial and independent judiciary.

Police reform appears to be stalled. There was some hope after the surge of civilian pressure for reform that followed the 2011 killing of the son of the rector for the Autonomous National University of Honduras and a friend. The Commission for the Reform of Public Security produced a series of proposals to improve the safety of the Honduran citizenry, including recommendations for improving police training, disciplinary procedures, and the structure of pubic security institutions.

Unfortunately, the Honduran Congress dissolved the commission in January 2014, during the lame duck period before President Juan Orlando Hernandez took office. Few of its recommendations have been carried out.

“They could have purged and trained the police during this time. But instead they put 5,000 military police on the street who don’t know what a chain of custody is,” lamented the expert on violence.

The Honduran government claims that over 2,000 police officers have been purged since May 2012, but there is little public information that would allow for an independent assessment of the reasons for the dismissals. And even when police are removed, they are not prosecuted; some are even allowed to return to the force. This is no way to instill accountability.

Meanwhile, the independence of the Honduran justice system is under attack. Since November 2013, the Judiciary Council has dismissed 29 judges and suspended 28 without an appropriate process, according to a member of the Association of Judges for Democracy. “This means that judges feel intimidated. They feel if they rule against well-connected people, against politicians, they can be dismissed.”

In an attempt to improve investigations and prosecutions, special units have been created to investigate specific types of crimes. For example, the Special Victims Task Force was created in 2011 to tackle crimes against vulnerable groups such as journalists, human rights advocates, and the LGBT community. This approach has been funded by the United States. It has promise, but the results are unclear so far. So is the question of whether the success of these specialized efforts can lead to broader improvements in the judicial system.

Providing security for justice operators is a particularly daunting problem. From 2010 to December 2014, 86 legal professionals were killed, according to information received by the Inter-American Commission on Human Rights.

Although the state provides some protection, the funding allocated for this purpose is inadequate. “In a country with the highest levels of violence and impunity in the region,” noted the Inter-American Commission on Human Rights, “the State necessarily has a special obligation to protect, so that its justice sector operators can carry out their work to fight impunity without becoming victims in the very cases they are investigating.”

To try and target the problems driving the endemic violence in Honduras, the government, joined by the governments of Guatemala and El Salvador, has released its Alliance for Prosperity plan, which is designed to increase investment in infrastructure and encourage foreign investment. The Obama administration has announced that it will ask Congress for $1 billion to help fund the initiative, but details about the security strategy are scarce.

It remains to be seen exactly how this money will be spent. Looking at San Pedro Sula, it is clear that a dramatic change in political will would be needed for any initiative of this kind to be successful. International donors should not support a militarized security strategy, which would intensify abuses and fail to provide sustainable citizen security.

Funding for well-designed, community-based violence prevention programs could be helpful, but only if there is a government willing to reform the police, push for justice, and invest in the education, jobs, violence prevention, health, child protection, and community development programs needed to protect its poorest citizens.

The views expressed in this article are those of the author and do not necessarily represent the views of, and should not be attributed to, IPS – Inter Press Service. This article originally appeared in Foreign Policy in Focus.