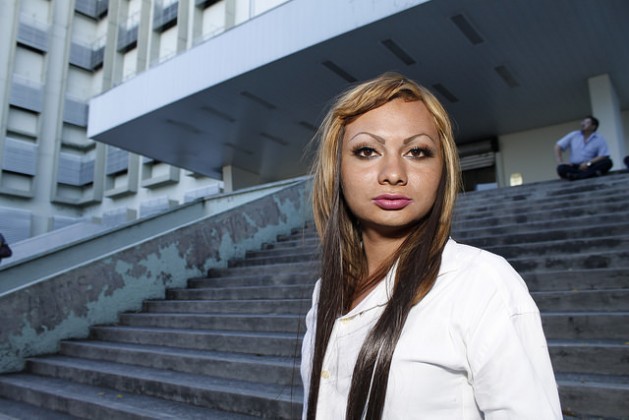 Daniela Alfaro standing in front of the University of El Salvador med school, where the complaints she has filed about the harassment and aggression she has suffered as a transgender student of health education have gone nowhere. Credit: Edgardo Ayala/IPS

SAN SALVADOR, Feb 18 2015 (IPS) - Despite the aggression and abuse she has suffered at the University of El Salvador because she is a trans woman, Daniela Alfaro is determined to graduate with a degree in health education.

“There is very little tolerance of us at the university. I thought it would be different from high school, but it isn’t,” Alfaro, a third year student of health education at the University of El Salvador med school, in the capital, told IPS.

Rejected by the rest of her family, Alfaro only has the emotional and financial support of her mother, “the only one who didn’t turn her back on me,” she said.

Like her, many members of the lesbian, gay, bisexual, transgender and intersex (LGBTI) community suffer harassment, mistreatment and even attacks on a daily basis in Central America because of their sexual orientation or gender identity, said activists from El Salvador, Guatemala and Nicaragua interviewed by IPS.

The discrimination, aggression and harassment that Alfaro has experienced at the university have come from her own classmates, as well as professors and university staff and authorities.

“We don’t exist for the state in the areas of health, education, work or social matters, there is no protocol for how public employees should treat us.” -- Carlos Valdés

Since 2010 she has been filing reports and complaints with the university authorities for the aggression she has suffered in the men’s bathroom, which she is forced to use. “But they don’t take my complaints seriously because I’m trans,” said the 27-year-old student.

Alfaro has also experienced the invisibility of LGBTI persons when they receive no response from institutions or officials because their complaints or reports are dismissed or ignored simply because of prejudice against non-heterosexuals, said Carlos Valdés, with the Lambda Organisation in Guatemala.

“We don’t exist for the state in the areas of health, education, work or social matters, there is no protocol for how public employees should treat us,” Valdés told IPS by phone from Guatemala City.

Lambda and three other organisations in Central America are carrying out the regional programme “Centroamérica Diferente” (Different Central America), aimed at securing respect for the human rights of people with different sexual orientations or gender identities.

“Basically we want to improve the quality of life of the LGBTI community, so we are no longer discriminated against by sectors and institutions of the government,” said Eduardo Vásquez, with the Salvadoran Asociación Entreamigos, which is involved in the initiative.

The programme began in May 2014 and will run through June 2016 in the four participating countries: El Salvador, Guatemala, Honduras and Nicaragua.

With funds from the European Union, it aims to get 40 organisations and more than 200 human rights activists involved, and to reach 3,550 members of the LGBTI community, 160 communicators, 600 public employees, 8,000 adolescents and 10 percent of the population of the four countries.

The programme provides legal support in cases of abuse and violence, and training for sexual diversity rights activists, and it carries out national and regional campaigns against homophobia.

The activists coordinate the activities with government institutions that provide public services to the LGBTI community, and exercise oversight to prevent abuses and discrimination, for example in health centres, schools and the workplace, or in police procedures.

“We are sad to see that some police continue to use poor procedures during searches, or refer in a disrespectful manner to gay or transgender persons,” Norman Gutiérrez, with the Centre for AIDS Education and Prevention in Nicaragua, another group taking part in the initiative, told IPS by telephone.

The programme will also set up a regional LGBTI human rights observatory to monitor cases of abuse, attacks and violence, and will conduct a study to gauge the magnitude of human rights violations based on sexual orientation or identity.

The observatory and the study will play a key role in detecting, for example, how severe is the phenomenon of homophobic murders, especially against transgender persons, since official statistics do not recognise hate crimes and merely classify them as homicides, the activists explained.

“In Guatemala the right to life is one of the rights that is most violated, and these murders often target trans persons,” Valdés said.

Given the lack of clear official figures, the organisations compile information as best they can, without the necessary systematisation. Based on this information, the groups participating in the programme estimate that in the last five years, at least 300 members of the LGBTI community, mainly transgender women, were murdered in hate crimes.

These murders occur in a context of generalised violence in the region. The so-called Northern Triangle, made up of El Salvador, Guatemala and Honduras, is one of the most violent regions in the world.

The murder rate in Honduras in the last few years has stood at around 70 per 100,000 population, according to the United Nations Office on Drugs and Crime (UNODC) – far above the Latin American average of 29 and the global average of 6.2.

In Honduras, LGBTI activists have reported at least 190 homophobic murders in the last five years, some of which were included in a report published Dec. 17 by the Inter-American Commission on Human Rights (IACHR).

The document reports human rights violations against the LGBTI community committed between January 2013 and March 2014 in 25 Organisation of American States member countries. In that period, at least 594 people perceived to be LGBTI were killed, while another 176 were victims of serious physical assaults.

The IACHR “urges States to adopt urgent and effective measures to prevent and respond to these human rights violations and to ensure that LGBTI persons can effectively enjoy their right to a life free from violence and discrimination.”

Among the cases compiled by the IACHR is the murder of a trans woman in Honduras who was stoned to death on Mar. 4, 2013 in the northern city of San Pedro Sula. She was identified as José Natanael Ramos, age 35.

Unlike other programmes that are implemented only in the capital cities, Centroamérica Diferente plans to reach small cities and towns as well, where the violence, discrimination and vulnerability are generally worse.

“In small towns there is much more ‘machismo’, more violence and more homophobia. Some hate crimes and murders aren’t even reported,” added Gutiérrez, the Nicaraguan activist.

There is also a high level of discrimination in the workplace against the LGBTI community in Central America, said Valdés, with the Lambda Organisation from Guatemala.

“For example, gays have to hide their identity in order to get a job, and if their sexual orientation is discovered, they are harassed until they quit,” he said.

Alfaro, meanwhile, said in front of the med school where she studies that she will not stop denouncing the discrimination and harassment she suffers, until she finally sees justice done.

“I just hope that someday they will respect my identity as a woman,” she said.