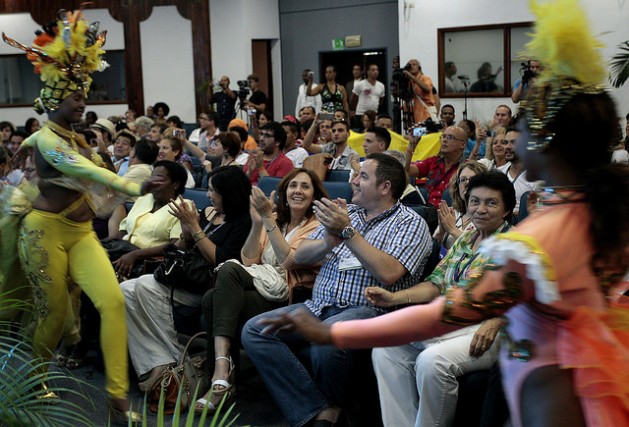 Members of the Tropicana dance company animate a session of the conference of the International Association of Lesbian, Gay, Bisexual, Trans and Intersex People for Latin America and the Caribbean, in the Cuban resort town of Varadero. Credit: Jorge Luis Baños/IPS

VARADERO, Cuba , May 10 2014 (IPS) - Although it might not seem to be, Latin America is the most active region in the world when it comes to the defence of the rights of lesbian, gay, bisexual, transgender and intersex (LGBTI) people.

That is due to the maturity and intelligent strategies that the LGBTI movement has come up with in a number of the region’s 33 countries, where the level of respect for sexual orientation and gender identity still varies a great deal, however, activists from around the region told IPS at a conference in the Cuban resort town of Varadero.

“The most progressive and interesting proposals are emerging in the Americas,” said Mexican activist Gloria Careaga during the sixth Regional Conference of the International Association of Lesbian, Gay, Bisexual, Trans and Intersex People for Latin America and the Caribbean (ILGALAC), which was held here this week.

Leading the changes are Argentina and Uruguay, said Careaga, the co-secretary of the global federation, which was founded in 1978 and has Consultative Status to the United Nations Economic and Social Council.

These two Southern Cone countries have passed laws against discrimination and legalising same-sex marriage and adoptions.

Careaga added that other countries that have taken major steps are Brazil, Colombia and Mexico. She also stressed the progress made in Cuba, where “public displays of homosexuality” were illegal until the 1990s, and which is now hosting the May 6-10 regional conference.

In general terms, the Caribbean is the part of the region that is lagging the most in terms of LGBTI rights.

Today, homosexuality is only criminalised in two Latin American countries, Belize and Guyana. That is compared to nine Caribbean island nations that penalise same-sex acts, especially male on male.

Antigua and Barbuda, Barbados, Saint Vincent and the Grenadines, Dominica, Grenada, Jamaica, St. Kitts and Nevis, St. Lucia and Trinidad and Tobago provide for prison sentences of between 10 and 50 years for people convicted of engaging in same-sex acts.

And since 1976, Trinidad and Tobago has barred homosexuals from entering the country.

For these and other reasons, the conference in the Plaza America Convention Centre in Varadero, 121 km east of Havana, is the first held in the Caribbean region. The gathering brought together representatives of more than 200 organisations belonging to ILGALAC, along with participants from Europe and the United States.

Rainbow flags, the global symbol of respect for free sexual orientation and gender identity, and signs with inclusive messages adorn the convention centre’s corridors and halls.

Despite the situation in the Caribbean, this region as a whole continues to gain ground in the fight against deep-rooted homophobia and sexism.

To explain the advances made, Careaga stressed that every country has outlined its own agenda, adapted to its specific context.

Argentine lawyer Pedro Paradiso, who has been involved in the cause for over 20 years, said the evolution of LGBTI activism has been a key factor.

“We have gradually changed. At first the struggle was much more about victimisation and protests. But our approach began to expand and to be renovated. Now we are subjects of rights,” the member of the Argentine Homosexual Community, an organisation that emerged over three decades ago, told IPS.

In his view, raising the self-esteem of the non-heterosexual population and taking an approach based on their rights as a collective were decisive, although he said there were many other factors involved.

According to Paradiso, the movement started out by empowering itself and gaining in visibility. Later it began to gain institutional status and to demand sexual and reproductive rights as human rights. It also started forging ties with other social movements, and alliances were forged with political parties and public and private institutions like universities.

In addition, the movement gained ground in international forums like the United Nations and the Organisation of American States, which can exercise pressure to some extent on governments and member states.

And to the extent that each legal system allowed, the LGBTI community has used the courts to forge paths, sometimes tortuous, towards equality.

That is the case of Colombia, where same-sex couples legalise their unions in the courts, while waiting for a law on same-sex marriage. “The process is like a long, painful birth,” said Anaís Morales of the Corporación Femm, which groups lesbian and bisexual women in that South American country.

The 25-year-old feminist activist said women are still outnumbered in the fight for sexual and reproductive rights. “Gay men are the most visible,” Morales told IPS.

In general terms, the women’s organisations present in Varadero agreed that women suffer from double discrimination because of their gender and sexual orientation, and said they needed greater access to assisted reproduction techniques, respectful treatment in health services, and better connections between the women’s and lesbian rights movements.

The first transgender city council member in Chile, Zuliana Araya, told IPS that the LGBTI movement needed to forge closer internal ties. “Among ourselves there can be no discrimination,” said the city councillor from Valparaíso, who is an activist in a local union of trans persons.

“Just because the majority of our [trans] community is involved in commercial sex work doesn’t mean we should be left out,” said Araya, 50, whose activism led her into a career in politics, in a country that passed legislation against discrimination in May 2012. “We are still in the stage of demanding our rights,” she said.

Bringing about a cultural and social shift towards respect for sexual and gender diversity is the big challenge, even in Argentina and Uruguay, whose legislation is among the most advanced in the world.

The hindering effects of religious fundamentalism and political conservatism are also felt, especially in the Caribbean. Although gay Dominican activist Davis Ventura told IPS that “there are many Caribbeans.”

The 40-year-old Ventura said the criminalisation of same-sex relations in the English-speaking Caribbean makes activism virtually impossible, or confines it to international forums, while a “mid” level of progress has been made in the Spanish-speaking countries – Cuba, the Dominican Republic and Puerto Rico – and the islands with French and Dutch influence are the most progressive.

Firm steps have been taken in Puerto Rico at the municipal level, while there are associations that have gained visibility in the Dominican Republic and Cuba passed the first anti-discrimination law in the Caribbean in 2013, when it approved a new labour code that explicitly protects the labour rights of non-heterosexuals.

However, there are voices arguing that there is no actual LGBTI movement as such in Cuba.

Manuel Vázquez, the head of legal advisory services in the National Sex Education Centre (CENESEX), a public institution, told IPS that “we are seeing groups that are actively asking for, demanding and discussing sexual rights.”

In the view of Maykel González, of the Proyecto Arcoíris (Rainbow Project), activism is still emerging.

Arcoíris, which describes itself as “independent and anti-capitalist”, the non-governmental Cuban Multidisciplinary Society for the Study of Sexuality, and initiatives supported by government institutions like CENESEX or the National Centre for the Prevention of STI/HIV/AIDS represented Cuba in the ILGALAC conference.