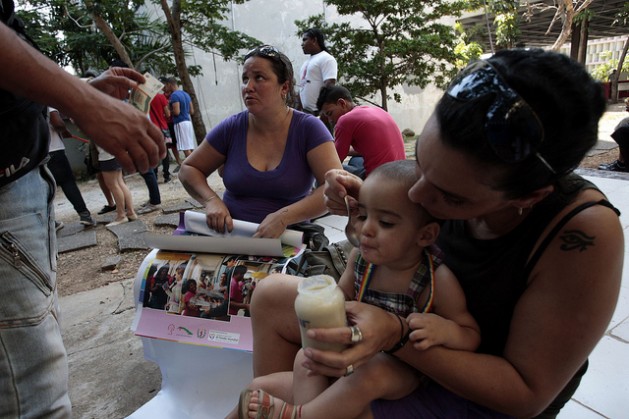 Leonardo and his mothers Yohana Llanes (right) and Támara Amaral, at one of the May 2013 anti-homophobia events in Havana. Credit: Jorge Luis Baños/IPS

HAVANA, Jun 4 2013 (IPS) - Many lesbians and gays in Cuba find different ways of achieving their dream of becoming mothers and fathers and forming families. But this is complicated in a country where neither civil unions nor adoption by non-heterosexual persons are legally recognised.

“It is very hard…and even frustrating that I have no legal rights over my boy. I am not his biological father, but I’ve held him in my arms since his birth. There is nothing legal to define or protect our relationship,” said Junior del Toro, holding three-year-old Adrián on his lap.

Del Toro, a state company employee in Havana, and his partner decided to have a son “as an important part of family happiness” after 15 years of being in a relationship, he said. “We talked to different people until a woman friend of ours selflessly agreed to be part of helping us to have a child,” he said in an interview with IPS.

“My partner is the biological father and the mother shares in the child-raising with us. But I am the one who is most affected by the issue of rights, including in everyday life. For example, if the baby has to go to hospital and I am alone in dealing with the situation, I have no legal authority to decide anything about his illness,” he said, with visible distress.

Del Toro’s story is just one of many among the lesbian, gay, bisexual and transgender (LGBT) community, which has been waiting for years for the legislature to discuss draft reforms of the 1975 Family Code, which would recognise same-sex unions, for example.

This is the most recurrent demand among LGBT people in Cuba and would be the first step in giving recognition to other sexual rights, according to the state-run National Centre for Sex Education (CENESEX), which has been carrying out a systematic campaign to win respect for free sexual orientation and gender identity.

Every May since 2008 marks the high point of that drive: the Cuban Campaign against Homophobia. The schedule of activities is organised around May 17th, the International Day against Homophobia and Transphobia, and includes educational, academic and — for the first time this year — sports activities.

The Sixth National Campaign, which lasted throughout May, focused on the family, “because it is the space, along with the workplace, where the rights of LGBT persons are most violated,” according to CENESEX legal consultants. In the discussions that were part of the month’s events, one of the topics was this population group’s right to form families.

The question of non-heterosexuals adopting children “is a concern, although it is not one of the central concerns” brought to the attention of CENESEX experts, said Manuel Vázquez, a lawyer who oversees the institution’s legal consultation services.

However, Cuban activists are adding more demands as they wait for same-sex civil unions to be legalised and observe the progress that has been made on LGBT rights in other Latin American countries.

Argentina, Uruguay and the Mexican capital allow the adoption of children by same-sex married couples. But in the Caribbean, where homosexuality is punishable in a number of nations, only Aruba and the Netherlands Antilles recognise overseas adoptions.

In a May 12, 2012 joint statement, the Men for Diversity (HxD) organisation and CENESEX urged the Raúl Castro government to allow “all possibilities of union between same-sex couples, including marriage, as well as adoption and reproduction for homosexual persons.”

Dr. Alberto Roque, an activist who founded HxD, advocates the extension of assisted reproduction services to single women and lesbian couples in Cuba. “In these cases, the techniques for assisted reproduction used have a low degree of technological complexity, because it is not a case of infertile persons,” he said in a post on his blog, HOMOsapiens.

Lesbian groups such as Oremi in Havana; Las Isabelas in the eastern city of Santiago de Cuba; Fénix in Cienfuegos; and Atenea, which was created this year in the central city of Ciego de Ávila, are discussing matters related to lesbian maternity and seeking mechanisms for raising awareness about the subject among the general public.

“Some women look for a man who is interested in being a father or a donor and they self-inseminate using crude methods, sometimes even endangering their health,” said psychologist Norma Guillard. “We should all have the right to have children, either our own or adopted,” she told IPS.

However, the issue of legalising adoption by homosexual couples is a controversial, taboo subject in Cuba, where “public displays of homosexuality” were penalised until the 1990s.

“I agree with homosexuals getting married, but not with them adopting children, who always suffer the trauma of social rejection. For me, the emotional stability of a child is more important than the right of an adult,” said Rosario F. in a post on the Café 108 interactive section of the IPS Cuba web site.

Activist Camilo García posted that “there is still a very deep-rooted prejudice that homosexual people are not capable of bringing up children as well as heterosexuals. People continue to view them as ‘sick,’ and believe they might pass on their ‘sickness’ to children,” he said.

“Most of us came from heterosexual families. If it was logical that homosexuality was something that you could catch or learn at home, we would have been like our parents. This argument is not viable, and it must be fought,” transvestite Riuber Alarcón told IPS.

A study by the Autonomous University of Yucatán in Mexico, published in 2011 by an online psychology magazine, Iztacala, found in a survey of 100 respondents between the ages of 18 and 63 that “this generation of young people displays more positive attitudes and beliefs toward adoption by same-sex couples.”

In Cuba, experts say that more studies are needed regarding same-sex couples and their families.