BOGOTA, Mar 2 2009 (IPS) - Members of the gay civil rights advocacy group Colombia Diversa just celebrated their fifth anniversary with a big event, which the occasion clearly merited due to a recent landmark decision by the Constitutional Court recognising equal rights for heterosexual and same-sex partners in common-law unions. 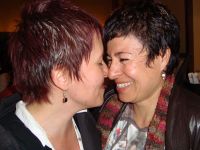 Marcela Sánchez, a lesbian activist who heads Colombia Diversa, told IPS that the legal decision handed down by the Court in late January marked the end of a long battle for equal rights for the LGBT (lesbian, gay, bisexual, transgender) community.

It also expanded on earlier legal decisions issued by the Court in 2007 and 2008, which extended several common-law marriage property and inheritance rights, as well as social security and health insurance rights, to same-sex couples.

“Uruguay was the first country in the region to recognise the rights of homosexual couples, but overall, the Uruguayan law grants fewer rights than those now covered by Colombia’s legislation,” said Sánchez.

“Argentina, Mexico and Brazil also recognise rights for gays and lesbians, but with differences between states, or limited to specific sectors, such as public employees,” she added.

The Constitutional Court verdict, which applies throughout the national territory, refers to 42 articles in 28 different codes or laws that deal with unmarried couples or common-law unions, ruling that in each case, the benefit, guarantee or obligation in question “also covers same-sex couples and unions.” Couples can claim these rights after living together for two years.

In comparison to battles fought in other countries, the gains won by gays and lesbians in Colombia differ in that their major ally has been the judiciary, not the executive or legislative branches, where pressure from conservative sectors and the powerful Roman Catholic Church have blocked initiatives put forward since 1999 by progressive politicians or political forces.

Eight of the nine Constitutional Court judges ruled in favour of a lawsuit filed by Colombia Diversa at the head of around 30 other non-governmental organisations, human rights groups and academic centres.

The Colombian constitution, which was rewritten in 1991, guarantees all fundamental rights for everyone, without distinction of race or any other condition, and establishes mechanisms to protect Colombians against discrimination. That facilitated the struggle of groups that brought a series of legal actions since 2005 in defence of gay rights, activist Manuel Velandia told IPS.

The Jan. 26 ruling granted an estimated 300,000 LGBT couples full inheritance rights and the right to Colombian nationality for a foreigner in a same-sex union with a Colombian in this country. It also states that members of same-sex couples cannot be forced to testify against their partners.

And in the military, if one of the members of a same-sex couple belongs to the armed forces, his or her partner will enjoy all of the special benefits that up to now were only limited to heterosexual couples.

In addition, in a civil war-torn country like Colombia, the Court extended to same-sex couples the right to reparations when one of the partners suffers from armed conflict-related crimes like murder, torture, sexual abuse, or forced displacement or disappearance.

Sánchez and Velandia both commented that activists would not give up the fight to conquer the only two rights not achieved so far – the right to marry and to adopt. But they also said that for now, their struggle would focus on consolidating the new gains, which will not magically eliminate the homophobia and discrimination suffered by members of the LGBT community in this South American country.

The first organised groups of lesbians and gays fighting for their rights in Colombia emerged in 1977, and consensual homosexual activity was not decriminalised until 1980.

Each stride made in the public sphere has been accompanied by private, and generally painful, struggles.

That is the case of Elizabeth Castillo, director of the LGBT Community Centre, who told IPS that “I always felt like a lesbian, but it was not until the age of 20, 17 years ago, that I understood that I could be one.”

Castillo works for the non-governmental group Profamilia and is coordinator of Lesbian Mothers,” a support group that works with women who are lesbians, but who don’t always know how to overcome the difficulties and prejudices they face in our society.”

The five-year-old support group now brings together 400 “divorced women, single mothers, and some women who are still married but separated, all of whom are seeking a way forward and how to be themselves,” she said.

“Being an activist means refusing to bow your head to injustice. If we’re talking about human rights, it means not accepting debate on what our rights are, because errors should not be repeated.”

Castillo, who is a lawyer and a single mother, continues to experience day-to-day discrimination “in many forms,” by her colleagues as well as by people on the street, like taxi drivers who do not hesitate to make all kinds of comments when they drive her home from a party that they can see was held by people in the LGBT community.

“We are still very vulnerable, regardless of our profession, or of how empowered we may be, because the culture remains essentially homophobic,” she said.

The first lesbians to legally register as a same-sex couple in Colombia in 2007 were Adriana González and Marcela Rojas.

“We were already living together when my mother died,” González told IPS, and comments made by some of her relatives about naming siblings or nieces and nephews as heirs “got us thinking, and we decided to formalise our relationship and our family, with Marcela’s son, who is 21 years old.”

One of her brothers did not attend the registration and celebration of their de facto union, which he described as “shameless,” while another, an evangelical pastor, said “may God forgive them.”

But González’s sisters-in-law and father were there, along with Rojas’s family, although after her mother fell ill later, she said that when they heard the news, “everyone laughed at and made fun of her.”

When the couple went to register their apartment as family property shortly after they were legalised as a de facto union, the notary’s office “had to call around to ask for information, while several of the startled or terrified employees asked us insistent question – ‘you two are a couple??’ – although in the end they had to accept it,” said González.

NO MORE DENIAL OF RIGHTS

“What was achieved was a reform to all of the existing laws and rules, and now it must be put into effect in all spheres,” lawyer Mauricio Albarracín, a gay member of Colombia Diversa’s legal committee, told IPS.

To do that, “public and private employees must be given instructions, and people must be encouraged to use the new rights, preventing more discrimination or demands that gays and lesbians be required to provide additional requisites,” he said.

“Our immediate task is to make sure that the ruling is enforced in all spheres,” said Albarracín.

Marcela Sánchez pointed out that compliance with the court decision “is not automatic, and we have to demand government measures to help the content of the ruling overcome prejudices, and to assist people who don’t know how to use what they have never had.”

The director of Colombia Diversa said the battle will be a long one. She also said the questions of the right to adopt and to marry remain long-term goals.

Same-sex marriage is currently only legal in seven countries, “which gives you an idea of how much work is left to be done,” said Sánchez. “In the case of adoption too, but luckily in Colombia individuals can adopt, regardless of whether or not they have a partner.”

The group will continue the various campaigns it has carried out over the past five years, with the support of public figures, prominent artistes and journalists, like the chair of the Colombia Diversa board of directors Virgilio Barco, the son of the late former president (1986-1990) of the same name and the brother of Colombia’s ambassador to the United States, Carolina Barco.

“Having alliances with influential and powerful figures is definitely important to the cause, and has to do with the symbolic capital of gays and lesbians,” said Albarracín.

Lesbians feel that the time has come to tell “society and ourselves how important it is for our rights to be protected,” said Sánchez.