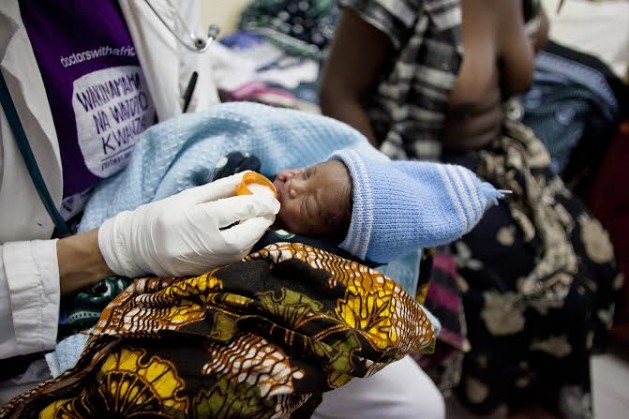 Surviving in Africa, especially when you are a premature baby who requires special care, is not always a certainty. Credit: Casia Ciechanowska/Doctors with Africa CUAMM

On the first day of the 59th Commission on the Status of Women(CSW)  in New York, the Permanent Missions of Italy and United Republic of Tanzania to the U.N. opened the photographic exhibition ‘A waiting room- Mothers and children first’.

The pictures were taken by Polish photographer Kasia Ciechanowska, who focused on the conditions of Tanzanian women, highlighting the risks pregnant women go through in poor healthcare conditions.

The exhibition was showcased by the Italian NGO Doctors with Africa CUAMM which the Ambassador for the Permanent Mission of Italy, Sebastiano Cardi, described as the “largest Italian organisation involved in the promotion and protection of health in Africa.”

A spokesperson for Doctors with Africa CUAMM, Andrea Atzori, noted that the exhibition was showcasing the work of a maternal health program of the same name launched in 2012.

“’Women and children first’ (aims to) overcome all the barriers -financial, cultural and geographical- to assess basic health service, particularly pregnant service… Activities will be done within communities in hospital, health centres and government, in order to provide basic policies to reduce maternal and infant mortality in Tanzania,” said Atzori.

The Ambassador of the Tanzanian Mission, Tuvako Manongi, said that this  photographic exhibition brings Tanzania to the U.N. and should be an example for other countries to follow.

“Here at the U.N. we are engaged in the post-2015 development agenda. One of the core issues for… Africa, and for my country, is pursuing a health agenda in partnership with governments, civil society and CUAMM. Doctors with Africa has shown us that this partnership can win,” he added.

The images tell the story of Eliza, a young woman who is waiting in a camp near the hospital of Tosamaganga in Tanzania, while her daughter is giving birth to a premature baby. A close look at Eliza’s day shows the challenges and hopes for patients and their families in healthcare centres.

Through these pictures, said the Italian Ambassador at the launch of the exhibition, visitors can learn about the connection between medical and family care, as part of the same path towards health, as well as the central role that African women and girls hold in society.

Manongi said: “the waiting room facilities and the health service can make the difference between life and death….Doctors with Africa’ s work on creating safer health conditions, has given the opportunity to women and their children to live.”

Atzori told IPS that this showcase is a way to bring to a higher level CUAMM’s action on the field. “Our challenge is to bring the voices from the field. The voice of a grandmother, a mother, or a child who need access to adequate healthcare structures.”