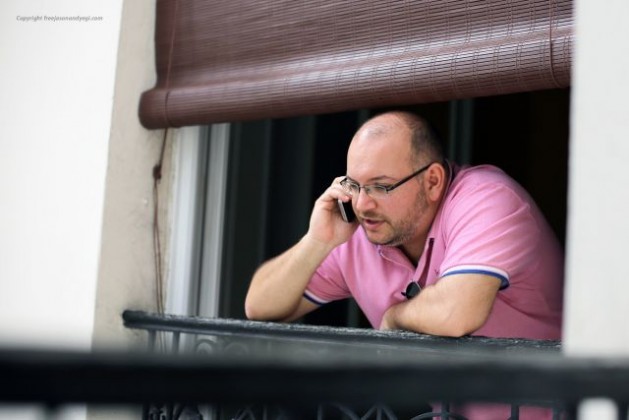 WASHINGTON, Mar 12 2015 (IPS) - The lawyer for Jason Rezaian, the Iranian-American Washington Post reporter detained in Tehran since Jul. 22, 2014, has officially requested temporary bail for her client during Nowruz, the beginning of the Persian calendar year when some prisoners have customarily been granted furlough requests.

“This time of year, with his birthday and Nowruz [Mar. 21] coming up, we are certainly hopeful that the folks in government will see that there is really no justifiable reason for Jason to be in prison,” said Jason’s brother, Ali, in an interview here Wednesday with IPS.

“[The Rouhani government] would like to see him free, but they have shown to be completely unwilling to spend any of their political capital on this case or any of the other horrendous violations going on in the country." -- Hadi Ghaemi

Rezaian, who spoke at the National Press Club’s event today naming Jason as a recipient of its John Abuchon press freedom award, said his family has not been officially informed of the charge his brother is facing.

The Iranian judiciary, which does not recognise dual citizenship, hasn’t publicly announced charges. But Foreign Minister Javad Zarif said Sept. 17 that Rezaian, whom he described as a “fair reporter,” is aware of the charge during an interview with National Public Radio (NPR).

Mohammad Larijani, a top advisor to Iran’s supreme leader and the head of the judiciary’s human rights council, was also unspecific but told Euronews Nov. 11 that Rezaian was “involved in activities beyond journalism.”

The influential politician added that he expected Rezaian to be released soon: “My hope is that before going to the court process, the prosecutor could be content to drop the case to see that maybe the accusations are not quite substantial.”

Four months later, Rezaian is facing trial in the Islamic Republic’s revolutionary court, which operates separately from criminal and civil courts and handles cases categorized by the judiciary as pertaining to national security issues.

Human rights groups say the court tries people for ideological and political reasons and that case outcomes are often predetermined with harsh sentences.

“Jason is not only a credentialed journalist engaging in journalist activities, he’s also a reporter for the Washington Post and it should be understood that his job requires him to speak to people and understand what is going on in Iran and portray the life and the activities of the people there,” Ali Rezaian told IPS. “He has done this fairly for more than a decade.”

Born to an Iranian father and American mother, Jason Rezaian, who covered Iran for IPS until 2012, will likely spend his 39th birthday in Iran’s notorious Evin prison on Mar. 15.

Rezaian moved to Iran, where press freedom is severely limited, in 2008, and became the Washington Post’s Tehran bureau chief in 2012.

No other journalist working with a Western news outlet has been held as long as Rezaian, who has been detained for more than 230 days.

Ali Rezaian told IPS that his brother loved his life in Iran and would often encourage foreigners to see the country for themselves.

Extending beyond the common Western news themes of the nuclear programme and political infighting, Rezaian’s journalistic portfolio is heavily focused on the social and cultural aspects of life in Iran.

“You know, you look at the work that he did with the Post and he spent a lot of time showing people a different side of Iran than we are regularly exposed to here in America,” said Rezaian.

“It’s just his nature to communicate with all sorts of people and its part of being a journalist, to ask questions, to try and reach out to people on both sides of the discussion to promote understanding,” he said.

Since being detained, Rezaian reportedly struggled to get several health conditions treated in a timely manner and has lost 50 pounds. But he may be suffering most from the isolation and lack of human contact, according to his brother, who said Jason spent five months in solitary confinement before being moved to a cell with another prisoner.

Initially seeking to personally request her son’s release from Supreme Leader Ali Khamenei, Rezaian’s Istanbul-based mother Mary was only allowed to see her son in Evin prison twice in December.

“I need a head doctor, because this is going on way too long,” Jason Rezaian told his mother after showing her he had not been tortured during a videotaped meeting, according to the Christian Science Monitor.

Since then, his family abroad has been unable to speak to Jason and the frequency and amount of contact with his wife, reporter Yeganeh Salehi who was detained with Rezaian and released on bail in October, has dramatically decreased.

The National Press Club released a letter today signed by prominent American journalists addressed to Iranian judicial chief Sadegh Larijani expressing “grave concern” over Rezaian’s detention and what it called “the ongoing disregard for the legal protections assured its citizens by the Iranian constitution.”

Boxing star Muhammad Ali also issued a statement through the club. “To my knowledge Jason is a man of peace and great faith, a man whose dedication and respect for the Iranian people is evident in his work. I support his family, friends and colleagues in their efforts to obtain his release,” he said

In addition to his family’s stepped up efforts and calls by the U.S. government, his editors, and journalistic institutions for Rezaian’s release, an online support petition has received more than 235,000 signatures from around the world.

But while some of the conditions of Rezaian’s custody have improved, he remains incarcerated while he and his family agonise over his fate.

His story is meanwhile competing for media coverage with the intensive talks over Iran’s nuclear programme aimed at reaching a final agreement by the end of June.

“This case has been a headache in the Iranian government’s foreign policy dealings with the outside world,” said Hadi Ghaemi, the executive director of the New York-based International Campaign for Human Rights in Iran. “But due to the sensitive time of the negotiations its probably not getting the attention it should.

“[The Rouhani government] would like to see him free but they have shown to be completely unwilling to spend any of their political capital on this case or any of the other horrendous violations going on in the country,” he said.

A State Department official told IPS, “We are doing everything we can to secure the release of Jason Rezaian and the other U.S. citizens detained and missing in Iran.”

The cases of American citizens were being kept separate from the ongoing negotiations over Iran’s nuclear programme, added the official.

“Nowruz is a wonderful time for the higher-ups in government to take a hard look at the evidence that some people say they have to decide if that’s really deserving of time in prison, let alone nearly eight months, and if not make it clear to those in power that Jason should be acquitted,” said Ali Rezaian.