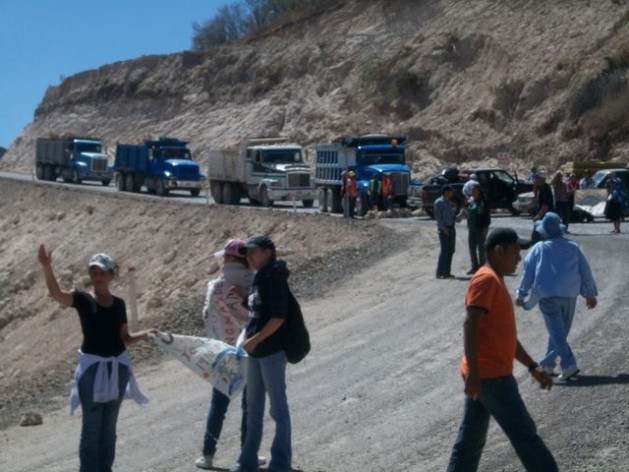 MEXICO CITY, Mar 21 2015 (IPS) - “I would tell institutions and companies that are aware of the enormous damage they do to the soil, plants and the environment, to respect the decisions of the people. They are attacking life and health,” complained Taurino Rincón, an indigenous Mexican.

Rincón belongs to the Nahua people and is a member of the Indigenous Council for the Defence of the Territory of Zacualpan, a community in the west of the country. The Council is fighting Gabfer SA de CV, a Mexican company planning open air mining exploration on their communal lands.

“We want the concession to be revoked. We are solidly against accepting it on any terms. We are defending the right to life, water and nature,” Rincón told IPS.

He claims the mining project would pollute the springs that provide water for 4,000 people who live in Zacualpan, in the municipality of Comala in Colima state, 660 kilometres from Mexico City.

Gabfer has been granted a concession to exploit open cast mining for gold, copper, silver and manganese in an area covering 100 hectares. Company representatives claim the project will not damage water sources, although they have not yet submitted the relevant Environmental Impact Assessment (EIA) report.

This case is an example of the multiple conflicts between corporations and the communities affected by their operations which are flaring up in many economic sectors in Latin America, where slight regard has been paid to the Guiding Principles on Business and Human Rights, issued in 2011 by the U.N. Human Rights Council.

The three pillars of the guiding principles comprise the state duty to protect human rights, the corporate responsibility to respect all human rights, and provision of remedy mechanisms for victims of business-related abuse.

“States must protect against human rights abuse within their territory and/or jurisdiction by third parties, including business enterprises,” according to the principles. Moreover, “states should set out clearly the expectation that all business enterprises domiciled in their territory and/or jurisdiction respect human rights throughout their operations.”

The principles are voluntary and non-binding, and are unenforceable outside the territory where the harm is caused, but they represent the first instrument for human rights protection in private and public sector economic activities.

Countries in Latin America have been slow to implement the principles, although levels of business-related conflict are high. The Global Atlas of Environmental Justice, coordinated by the Science and Technology Institute at Universitat Autònoma de Barcelona (UAB – Autonomous University of Barcelona) in Spain, has identified 99 environmental conflicts in Colombia, 64 in Brazil, 49 in Ecuador, 36 in Argentina, 35 in Chile, 33 in Peru and 32 in Mexico. 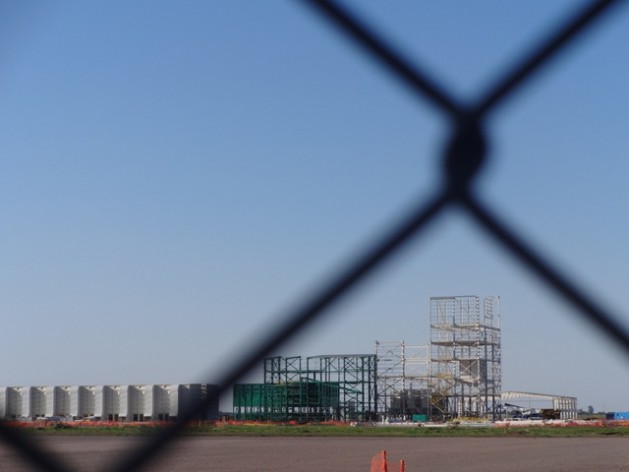 Protests by local people in Malvinas Argentinas, a town in the Argentine province of Córdoba, have brought construction of this plant belonging to U.S. biotech giant Monsanto to a temporary standstill. Credit: Fabiana Frayssinet/IPS

“It’s all very new. Previously there were no clear guidelines for governments on turning the principles into national reality,” said Benjamin Cokelet, head of the Project on Organising, Development, Education and Research (PODER), an NGO working for corporate accountability in Latin America that is based in Mexico City.

But he told IPS that “if we do not implement them, the legal framework will be coopted by other interests,” which will encourage “the practice of feigned compliance.”

According to the Human Rights Council, since 2013 Argentina, Chile, Colombia, Guatemala and Mexico have said they plan to implement the Guiding Principles, but none of them has done so.

In Chile, social conflicts have arisen related to mining, factory salmon farming, large-scale tree plantations and other sectors. A national plan is being produced to assess the current situation and identify gaps and good practices, according to the Chilean government delegation at the third annual U.N. Forum on Business and Human Rights held in Geneva in December 2014.

The plan will include effective remedies for victims, with special attention being paid to vulnerable groups, labour demands and actions to respect the environment, as well as anti-corruption measures and the promotion of transparency, the delegation announced at the Forum.

But José Aylwin, co-director of Observatorio Ciudadano (Citizens’ Watch), a Chilean NGO, said the pace of progress in his country is slow.

“Only Colombia has taken steps to develop this plan, while Chile has not progressed beyond making announcements, and has not even begun to open up a broad debate with the participation of civil society organisations and indigenous peoples to design the plan,” he told IPS.

For activists like Aylwin, a major concern is the continuing abuse of human rights by corporations and the impunity that surrounds it.

“In the Latin American region, the discourse on corporate social responsibility is still very repetitive, and there is reluctance to understand the situation in terms of human rights,” complained Colombian researcher Amanda Romero of the Business and Human Rights Resource Centre (CIEDH), an international NGO.

In spite of the Guiding Principles and other initiatives, “impunity is increasing” in Latin America, according to the researcher from CIEDH, which is based in London and launched its first report on the region in 2013.

As an example, Romero described the situation in Colombia, where conflict is on the rise due to mining concessions and infrastructure construction. “We have found an increase in human rights abuses correlating with protests and demands by communities that object to these projects,” she said.

This is in spite of the fact that the country has established mechanisms to address the linkage between human rights and companies, and that in July 2014 the government published its “Guidelines for a Public Policy on Business and Human Rights.”

These policy guidelines address risk and impact management, transparency, relations with communities, and labour and environmental matters, as well as safety, consumer rights and land ownership.

At the 26th session of the Human Rights Council, in June 2014, an inter-governmental working group with a diversified and inclusive membership was set up to draft a binding treaty incorporating the formerly voluntary Guiding Principles.

Latin American countries supporting this initiative include Bolivia, Cuba, Ecuador and Venezuela, while a bloc of countries led by Colombia, Mexico and Peru oppose it.

On Feb. 25 CIEDH launched two interactive platforms to assess actions taken to meet the Guiding Principles by companies and governments. Questionnaires were sent to 100 governments and 180 corporations.

Among the companies that responded were Falabella (Chile), Ecopetrol (Colombia), Grupo México, Petróleos Mexicanos (PEMEX) and Petróleos de Venezuela (PDVSA), which all forwarded their corporate social responsibility policies with their replies.

The seriousness of the situation has prompted several Latin American organisations to consider creating an observatory to monitor the issue.

Romero proposed that the Guiding Principles should be made national law; the binding treaty should be supported; and activists should continue to engage the agencies that act as guarantors for human rights treaties.

In Aylwin’s view, states should urgently adopt political and legislative measures “to ensure the consistency of their actions on the issue and to make companies effectively accountable for human rights abuses.”