Dr. Kirsten Stoebenau is a Gender and Population Specialist at the International Center for Research on Women (ICRW). 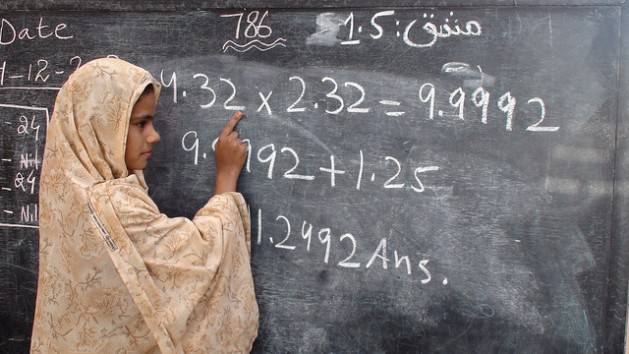 Girls who report that their domestic chores interfere with their schooling are three times more likely to drop out. Credit: Zofeen Ebrahim/IPS

WASHINGTON, Mar 25 2015 (IPS) - Earlier this month, the Barack Obama administration announced a new initiative designed to improve girls’ education around the world. Dubbed “Let Girls Learn,” the programme builds on current progress made, such as ensuring girls are enrolled in primary school at the same rates as boys, and is looking to expand opportunities for girls to complete their education.

The Obama administration’s leadership on this issue is commendable and incredibly important for moving global momentum on girls’ education forward.

Without transforming gender norms that hold too many girls back and holding schools accountable for ensuring girls stay in school and can return to school, girls - and indeed entire communities - will be deprived of future leaders.

We know that keeping girls in school and providing them with a quality education that can prepare them for their future continues to pay dividends down the line, including better health outcomes and better financial stability for girls themselves, and also for their families and communities.

Research shows that girls with secondary school education are six times less likely to marry early compared to girls who have very little or no education. Additionally, each extra year of a mother’s education reduces the probability of infant mortality by as much as 10 per cent and each extra year of secondary schooling can increase a girl’s future earnings by 10 to 20 per cent.

But around the world, far too many girls face insurmountable barriers that often cause girls to drop out of school, ultimately preventing them from getting the quality education they deserve.

Recently, the International Center for Research on Women (ICRW) conducted research to assess the main causes of school drop out for girls in two districts of the West Nile sub-region of Uganda where only six girls for every ten boys are enrolled in secondary school, a ratio far below the national average.

A predominantly rural and impoverished region, West Nile, Uganda’s recent past has been characterized by war and conflict.

As such, poverty plays a huge role in girls’ inability to continue school. Of the girls who dropped out of school nearly 50 per cent listed financial reasons as the main reason they dropped out of school. Pregnancy was the second most common reason girls gave for leaving school.

While these factors are indeed eye-opening, our research found, however, that gender norms and beliefs about the roles of women as compared to men, were among the most significant determinants of school dropout for girls in West Nile.

Traditionally in West Nile, girls were taught to be subservient to the men to whom they ‘belonged’, first to their fathers and then later in life to their husbands. Despite significant social change that has taken place over the past number of decades,  deeply-rooted gender norms and expectations are carried from one generation to the next and have a profound impact on girls’ and their families’ expectations and hopes for girls futures, and girls’ determination and ability to finish – or drop out of –school.

For example, while most parents surveyed said they value girls’ and boys’ schooling equally, they acknowledge burdens at home, like chores and housework, fall on the girls in the family, rather than the boys. Consequently, girls who reported their domestic chores had interfered with their schooling in the past were three times more likely to drop out.

The domestic sphere remains solely a woman’s domain in the West Nile, and in the face of high adult mortality due to poverty, war, and HIV, girls who lost a parent were even more likely to have to take on a high household chore burden. This set of burdens often includes caring for younger siblings, which likely contributes to girls in the study reporting only starting school on average at the age of 8.25 years, more than two years past the intended starting age of six.

For girls who become pregnant while in school, dropout is almost inevitable. Only 4 per cent of girls who reported they had ever been pregnant were still enrolled in school. Pregnancy is often followed by a forced marriage and the accompanying expectation that a girl’s responsibilities should now shift from her education to caring for her child.

These data highlight just how many barriers girls face in continuing their education, with so many of those barriers finding deep roots in cultural norms that simply don’t value girls the way they value boys. And while this study was conducted in the West Nile region of Uganda, gender norms that continue to hold girls back are certainly not rare around the world.

In order to succeed in letting girls learn, governments, schools, communities and families must dismantle barriers for girls where they exist. Local governments and communities must ensure girls get off to a good start with their education, by disseminating information about existing policies for the age at start of school, because we know that when girls are enrolled in school on time and progress through each grade on schedule, they’re more likely to continue their education.

The education and health sectors must also work with local governments to introduce comprehensive sexuality education in schools to improve knowledge of and access to reproductive health services to help prevent pregnancy, which currently marks the end of a girl’s education in Uganda.

Re-entry and retention policies for pregnant girls and mothers who gave birth as children must be strengthened so that these girls do not miss out on the opportunity to break an intergenerational cycle of poverty, which is all the more likely for an adolescent single mother without a secondary education.

Education is, simply put, a cornerstone for women’s empowerment and subsequently for local and national development.

Without transforming gender norms that hold too many girls back and holding schools accountable for ensuring girls stay in school and can return to school, girls – and indeed entire communities – will be deprived of future leaders that could be instrumental in helping to combat poverty in the community, which could empower more girls for generations to come.