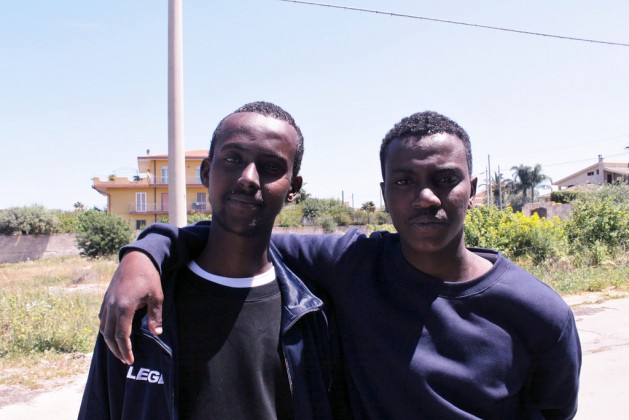 Mohammed (left) and Ahmed, two Somali migrants who survived crossing the Mediterranean and are now hosted in one of Syracuse’s first aid and reception centres, although they are not planning to remain in Italy for long. Credit: Silvia Giannelli/IPS

AUGUSTA, Syracuse, Italy , May 11 2015 (IPS) - Not even a month has passed since over 700 hundred migrants lost their lives in their attempt to reaching the shores of Italy and the media spotlights have already faded on the island of Sicily, Italy’s southern region and main gateway to Europe.

Yet, the migration flows have not stopped.

Five days ago, on May 3, 300 people arrived in the port of Augusta, in the province of Syracuse, and among them were 19-year-old Ahmed and 22-year-old Mohammed.

“That boat trip was the hardest thing I’ve ever done in my life, but I’m here, I’m OK and it will get better now” – Mohammed, a Somali migrant who survived crossing the Mediterranean to reach Italy

Both come from Somalia but they met in Libya, where they had worked for several months in order to save enough money to pay the smugglers running the traffic in migrants across the Mediterranean.

Ahmed and Mohammed are now hosted in one of Syracuse’s first aid and reception centres, but they are not planning to remain in Italy for long. Ahmed wants to go to Belgium, where some of his relatives already live, while Mohammed hopes to continue his trip towards Germany.

Crossing the Mediterranean was frightening, but they seem to have left all of their fears on the Libyan shores and their eyes are full of hope for the future.

“The sight of the sea from Libya was so scary, but when I look at it from here, it’s beautiful again,” says Ahmed, who is hoping to be able to study in Europe and become a doctor.

For Mohammed, “that boat trip was the hardest thing I’ve ever done in my life, but I’m here, I’m OK and it will get better now.”

Before leaving Libya, Ahmed had heard about the tragedy of the 700 who lost their lives, but that did not stop him because, he says, the risks are higher in Somalia than on the boats.

“The weather has been bad these days, but look how calm the sea is today,” a carabiniere standing in front of the centre told IPS. “We are getting ready for many, many more to arrive.”

Despite the fact that more than 25,000 migrants have already made it to Italy this year, the actual ‘migration season’ is just about to start. Meanwhile, Europe is lurching to answer southern European states’ request for help.

“But even with the best efforts, if people are put on these boats and sent to sea with no safety equipment, with not enough water, then nobody can guarantee that they will be found on time and that the rescue services will save everybody, because that would be simply a lie.”

While E.U. leaders continue to discuss possible naval blocks off Libyan territorial waters and southern European states try to open a debate on quotas of refugees to be shared among all member states, local authorities and Sicilian citizens are left with the task of handling the first aid and reception operations.

Augusta, a town of around 40,000 inhabitants, is one of the main bases of the Italian Navy in Sicily and it served as the headquarters of the Mare Nostrum operation, until it ended in October 2014.

Between April and October 2014, the town also hosted an emergency centre for unaccompanied minors, raising concerns and complaints of around 2,000 people who signed a petition to move the centre somewhere else and to propose naval blocks at the departure ports.

“This petition suggested exonerating from the allocation of migrants those municipalities that already suffer from economic insolvency and high unemployment levels, as is the case of Augusta,” Pietro Forestiere, local spokesperson for the right-wing Fratelli d’Italia party and one of the initiators of the petition, explained to IPS.

“The logic behind it is that you cannot ask someone who is already struggling to deliver proper services to its citizens to take care of migrant reception as well.”

The emergency centre of Augusta was eventually closed in October, but its example could be easily extended to the whole region, which suffers from the highest levels of poverty and the second highest unemployment rate in the whole of Italy.

Yet, despite the voices calling for strong action against immigration, it is very common to hear people in Augusta sympathise with the migrants, especially when it comes to refugees.

“They are made of flesh and blood, just like us. We simply can’t let them drown,” Alfonso, who owns a stand in the fish market, told IPS. “They are escaping war and poverty. If we can’t prevent them from coming, once they approach the coast, we must help them.”

Most citizens in Sicily do not appear to fear future arrivals. The problem is rather the feeling of being abandoned in handling the situation, as a customer at the market pointed out:

“This is a port, we have always been used to seeing foreigners around. The impact on our daily life is quite limited. Yet, something needs to be done, not so much for us but rather to help them, and we can’t do it on our own. This is a European – if not global – issue, and Europe must act.”