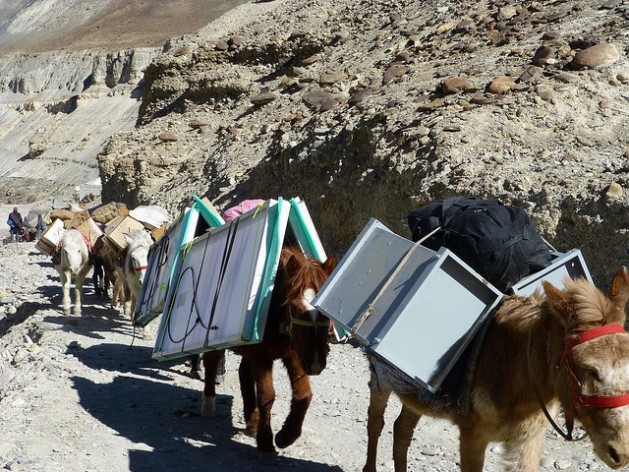 Mules carry a solar energy system to a remote region in the Himalayan desert region of Ladakh. Credit: Athar Parvaiz/IPS

UNITED NATIONS, May 19 2015 (IPS) - Secretary-General Ban Ki-moon, an unrelenting advocate of sustainable energy for all (SE4All), once dramatised the need for modern conveniences by holding up his cell phone before an audience in the Norwegian capital of Oslo and asking: “What would we do without them?”

“We are all dependent on phones, light, heating, air-conditioning and refrigeration,” but still there are billions of people in the world who do not have the benefit of most of these modern energy services, he added.

"We must move much faster to reach the billions who have been left behind.” -- Martin Krause

According to World Bank estimates, about 1.1 billion people don’t have access to electricity, and over 3.0 billion people still rely on polluting fuels such as kerosene, wood or other biomass to cook and, at times, heat their homes.

The world is heading in the right direction to achieve universal access to sustainable energy by 2030 – but must move faster, says a new World Bank report that tracks the progress of the SE4All initiative.

Besides achieving renewable energy goals, the United Nations is also vowing to eliminate extreme poverty and hunger from the face of the earth by the 2030 deadline.

Martin Krause, head of the Global Energy Policy Team at the U.N. Development Programme (UNDP), told IPS the goal to achieve universal access to sustainable energy is very much attainable, “but indeed we must move much faster to reach the billions who have been left behind.”

For the 1.1 billion without electricity, he said, a targeted and decentralised approach (i.e. mini-grids, solar home systems, micro-hydro plants) is needed to reach the predominately rural poor.

“And for the 3.0 billion who cook and heat with wood and dung, new technologies, better awareness and low-cost financing is needed to shift usage away from harmful fuels towards cleaner, and sustainable technologies and fuel sources,” said Krause.

In both of these cases, he pointed out, public and private financial resources will be necessary for success.

“For our part, UNDP has just released a new publication, the EnergyPlus Guidelines, which has been prepared to support our country partners in addressing some of these issues.”

Beginning Monday, the United Nations is hosting its second annual SE4all Forum, which is scheduled to conclude May 21.

According to the United Nations, leaders from government, business and civil society will announce new commitments and drive action to end energy poverty and fight climate change.

“They will present ways to catalyze finance and investment at the scale required to meet the targets of the UN Sustainable Energy for All (SE4All) initiative on energy access, energy efficiency and renewable energy.”

Over 1,000 practitioners will share and advance innovative energy solutions, according to a press release.

The Forum is expected to build momentum on energy issues ahead of both the September U..N Summit to adopt the post-2015 development agenda, and the December Climate Conference in Paris, and contribute to shaping the direction of energy policy for the crucial decades to come.

Fossil fuels, described as finite, include crude oil, natural gas and coal, which are expected to run out over the next few decades.

The renewable sources of energy include wind and solar power, hydroelectric and geothermal, amongst others.

According to the U.N. Industrial Organisation (UNIDO), universal access to renewable energy sources can be achieved at a cost of about 48 billion dollars per year and 960 billion dollars over a 20-year period.

In its report titled “Progress Toward Sustainable Energy: Global Tracking Framework 2015” released Monday, the World Bank said it is monitoring the world’s progress toward SE4All’s three goals: universal energy access; doubling the global rate of improvement in energy efficiency; and doubling the share of renewable energy in the global energy mix – all to be met by 2030.

These gains, the report said, were concentrated in South Asia and Sub-Saharan Africa, and mainly in urban areas. The global electrification rate increased from 83 percent in 2010 to 85 percent in 2012.