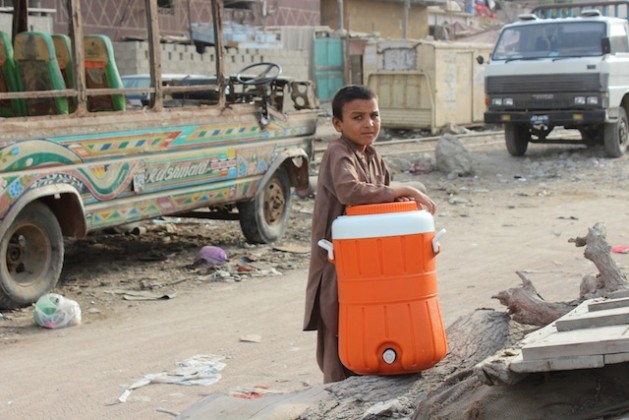 Children from informal settlements in Pakistan’s most populous city, Karachi, are often sent out with large containers to fetch water from taps outside private homes, set up by wealthier residents as an act of charity. Credit: Zofeen T. Ebrahim/IPS

KARACHI, Jun 25 2015 (IPS) - Over 950 people have perished in just five days. The morgues, already filled to capacity, are piling up with bodies, and in over-crowded hospitals the threat of further deaths hangs in the air.

Pakistan’s port city of Karachi, home to over 23 million people, is gasping in the grip of a dreadful heat wave, the worst the country has experienced since the 1950s, according to the Meteorology Department.

“In all my 25 years of service, I’ve never seen so many dead bodies arriving in such a short time." -- Mohammad Bilal, head of the Edhi Foundation’s morgue
Temperatures rose to 44.8 degrees Celsius on Saturday, Jun. 20, dropped slightly the following day and then shot back up to 45 degrees on Tuesday, Jun. 23 putting millions in this mega-city at risk of heat stroke.

Though the entire southern Sindh Province is affected – recording 1,100 deaths in total – its capital city, Karachi, has been worst hit – particularly due to the ‘urban heat island’ phenomenon, which climatologists say make 45-degree temperatures feel like 50-degree heat.

In this scenario, heat becomes trapped, turning the city into a kind of slow-cooking oven.

Every single resident is feeling the heat, but the majority of those who have succumbed to it come from Karachi’s army of poor, twice cursed by a lack of access to electricity and condemned to live in crowded, informal settlements that offer little respite from the scorching sun.

Already crushed by dismal health indicators, the poor have scant means of avoiding sun exposure, which intensifies their vulnerability.

Anwar Kazmi, spokesperson for the Edhi Foundation, Pakistan’s biggest charity, tells IPS that 50 percent of the dead were picked up from the streets, and likely included beggars, drug users and daily wage labourers with no choice but to defy government advisories to stay indoors until the blaze has passed.

Two days into the crisis, with every free space occupied and corpses arriving by the hundreds, the city’s largest morgue, run by the same charity, began burying bodies that had not been claimed.

“In all my 25 years of service, I’ve never seen so many dead bodies arriving in such a short time,” Mohammad Bilal, who heads the Edhi Foundation’s mortuary, tells IPS.

The government has come under fire for neglecting to sound the alarm in advance. Prime Minister Nawaz Sharif and Sindh Chief Minister Syed Qaim Ali Shah issued belated warnings by ordering the closure of schools and government offices.

Hospitals, meanwhile, are groaning under the strain of attempting to treat some 40,000 people across the province suffering from heat exhaustion and dehydration.

Experts say this highlights, yet again, the country’s utter lack of preparedness for climate-related tragedies.

And as always – as with droughts, floods or any other extreme weather events – the poor are the first to die off in droves.

The crisis is shedding light on several converging issues with which Pakistan has been grappling: energy shortages, the disproportionate impact of climate change on the poor and the fallout from rapid urbanisation. In Karachi, the country’s most populous metropolis, these problems are magnified manifold.

Though a census has not been carried out since 1998, NGOs say there are hundreds of millions who live and work on the streets, including beggars, hawkers and manual labourers.

More than 62 percent of the population here lives in informal settlements, with a density of nearly 6,000 people per square kilometre.

Many of them have no access to basic services like water and electricity, both crucial during times of extreme weather. The ‘kunda’ system, in which power is illegally tapped from the electrical mains, is a popular way around the ‘energy apartheid’.

Just this month, the city’s power utility company pulled down 1,500 such illicit ‘connections’.

But even the 46 percent of households across the country that are connected to the national electric grid are not guaranteed an uninterrupted supply. With Pakistan facing a daily energy shortage of close to 4,000 mega watts, power outages of up to 20 hours a day are not unusual.

At such moments, wealthier families can fall back on generators. But for the estimated 91 million people in the country who live on less than two dollars a day, there is no ‘Plan B’ – there is only a battle for survival, which too many in the last week have fought and lost.

For the bottom half of Pakistani society, official notifications on how to beat the heat are simply in one ear and out the other.

Taking lukewarm showers, using rehydration salts or staying indoors are not options for families eking out a living on 1.25 dollars or those who live in informal settlements where hundreds of households must share a single tap. 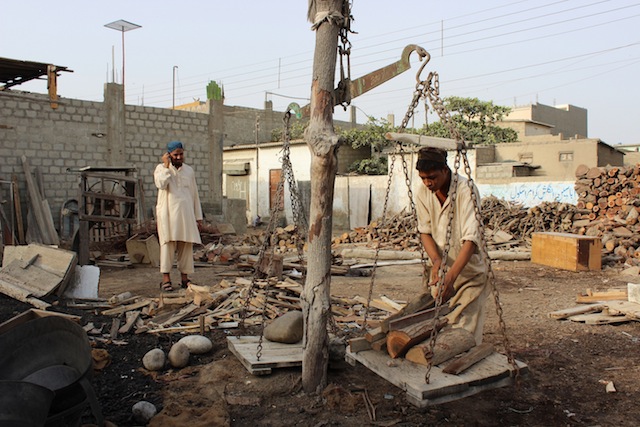 The government has advised residents of Pakistan’s port city of Karachi to stay indoors until a deadly heat wave passes, but for daily wage labourers this is not an option: no money means no food. Credit: Zofeen T. Ebrahim/IPS

Lashing out at the government’s indifference and belated response to the crisis, Dr. Tasneem Ahsan, former executive director of the Jinnah Postgraduate Medical Centre (JPMC), tells IPS that preventive action could have saved countless lives.

“The government should have taken up large spaces like marriage halls and schools and turned them into shelters, supplying electricity and water for people to come and cool down there.”

She also says officials could have parked water bowsers in poorer localities for people to douse themselves, advised the population on appropriate clothing and distributed leaflets on simple ways to keep cool.

The media, too, are at fault, she contends, for reporting the death count like sports scores instead of spreading the word on cost-effective, life-saving tips “like putting a wet towel on the head”.

Intermittent protests against power outages, aimed largely at the city’s main power company, K-Electric, served as a prelude to the present tragedy.

Though the country has an installed electricity capacity of 22,797 MW, production stands at a dismal 16,000 MW. In recent years, electricity demand has risen to 19,000 MW, meaning scores of people are either sharing a single power line or going without energy.

Meanwhile, civil society has been stepping in to fill the void left by the government, with far better results than some official attempts to provide emergency relief.

With most hospitals paralyzed by the number of patients, volunteers like Dr. Tasneem Butt, working the JPMC, have taken matters into their own hands. Using social media as a platform, she has circulated a list of necessary items including 100-200 bed sheets, 500 towels, bottled water, 15-20 slabs of ice and – perhaps most importantly – more volunteers.

“I got them immediately,” she tells IPS. “Now I’ve asked people to hold on to their pledges while I arrange for chillers and air-conditioners.

“The emergency ward is suffocating,” she adds. “It’s not just the patients who need to be kept cool, even the overworked doctors need this basic environment to be able to work optimally.”

Last week, the government of the Sindh Province cancelled leave for medical personnel and brought in additional staff to cope with the deluge of patients, which is expected to increase as devout observers of the Holy Ramadan fast succumb to fatigue and hunger.

The monsoon rains are still some days away, and until they arrive there is no telling how many more people will be moved from the streets into graves.

Interestingly, while other parts of the province have recorded higher temperatures, the deaths have occurred largely in Karachi due to urban congestion and overcrowding, experts say, with the majority of deaths reported in poor localities like Lyari, Malir and Korangi.

The end may be in sight for now, but as climate change becomes more extreme, incidents like these are only going to increase in magnitude and frequency, according to climatologists like Dr. Qamar-Uz-Zaman Chaudhry