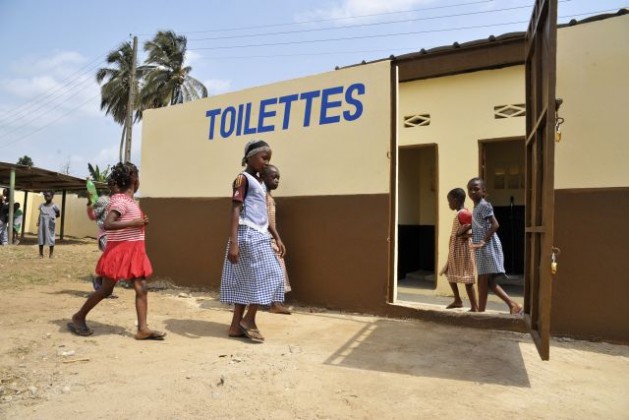 UNITED NATIONS, Jun 30 2015 (IPS) - As most developing nations fall short of meeting their goals on sanitation, the world’s poorest countries have been lagging far behind, according to a new U.N. report released here.

The Joint Monitoring Programme report, ‘Progress on Sanitation and Drinking Water: 2015 Update and MDG Assessment’, authored by the U.N. children’s agency UNICEF and the World Health Organisation (WHO), says one in three people, or 2.4 billion worldwide, are still without sanitation facilities – including 946 million people who defecate in the open.

“We cannot have another situation where we appear to be succeeding because the situation of the comparatively wealthy has improved, even as millions of people are still falling ill from dirty water or from environments that are contaminated with faeces." -- Tim Brewer of WaterAid

“What the data really show is the need to focus on inequalities as the only way to achieve sustainable progress,” said Sanjay Wijesekera, head of UNICEF’s global water, sanitation and hygiene programmes.

“The global model so far has been that the wealthiest move ahead first, and only when they have access do the poorest start catching up. If we are to reach universal access to sanitation by 2030, we need to ensure the poorest start making progress right away,” he said.

Pointing out the existing inequities, the report says progress on sanitation has been hampered by inadequate investments in behaviour change campaigns, lack of affordable products for the poor, and social norms which accept or even encourage open defecation.

Although some 2.1 billion people have gained access to improved sanitation since 1990, the world has missed the Millennium Development Goal (MDG) target by nearly 700 million people.

Today, only 68 per cent of the world’s population uses an improved sanitation facility – 9 percentage points below the MDG target of 77 per cent.

The total without access globally is now 663 million, almost a 100 million fewer than last year’s estimate, and the first time the number has fallen below 700 million.

As the MDGs expire this year, the goal on water has been met overall, but with wide gaps remaining, particularly in Sub-Saharan Africa.

The goal on sanitation, however, has failed dramatically. At present rates of progress it would take 300 years for everyone in Sub-Saharan Africa to get access to a sanitary toilet, said the report.

Tim Brewer, Policy Analyst on Monitoring and Accountability at the London-based WaterAid, told IPS the MDG goal on water was met largely because of those who were easiest to reach.

“The poorest are often still being left behind. What we need to do in the new U.N. Sustainable Development Goals (SDGs), now under negotiation, is to make sure that progress for the poorest is made the headline figure.”

“We cannot have another situation where we appear to be succeeding because the situation of the comparatively wealthy has improved, even as millions of people are still falling ill from dirty water or from environments that are contaminated with faeces,” he noted.

Brewer said monitoring is key: “We need to measure basic access for the poor, as well as measuring other indicators such as whether water is safe and affordable, and whether wastewater is safely treated.”

“This is the only way to make sure we reach everyone, everywhere by 2030 and hold governments accountable to their promises,” he argued.

In countries like Japan and South Korea, according to published reports, sanitation is far beyond a basic necessity: it has the trappings of luxury with piped in music, automatic flushing, and in some cases, scenic window views — even while millions in developing nations defecate openly in nearby rural jungles or on rail tracks (with their bowel movements apparently being coordinated with train schedules, according to a New York Times report.)

The practice of open defecation is also linked to a higher risk of stunting – or chronic malnutrition – which affects 161 million children worldwide, leaving them with irreversible physical and cognitive damage.

“To benefit human health it is vital to further accelerate progress on sanitation, particularly in rural and underserved areas,” says Dr Maria Neira, Director of the WHO Department of Public Health, Environmental and Social Determinants of Health.

Asked if it would be realistic for sanitation goals to be rolled into the proposed SDGs with a target date of 2030, UNICEF’s Wijesekera told IPS that an even more ambitious sanitation target is suggested for the new SDG agenda – to eliminate open defecation and achieve universal access to sanitation.

“I think the goal of achieving universal access to sanitation by 2030 is possible, but only if we start focusing on the poorest and most vulnerable right now (rather than waiting for the wealthiest to gain access first, as has historically been the case).”

He said: “We can also learn from the successes of the past 25 years, and especially the last 15. A number of countries have made rapid gains during the MDG era.’

For example, he pointed out, Ethiopia has reduced open defecation rates by 64 percentage points and Thailand has closed the gap in access between the richest and the poorest.

This shows what is possible when countries recognise the importance of tackling inequalities in access to Water, Sanitation and Hygiene (WASH), thus unlocking wider benefits in health, nutrition, education and economic productivity, he noted.

Asked how the sanitation problem can be resolved, Wijesekera told IPS: “Sanitation is not rocket science; most developed countries take it for granted.”

“But our experience on the ground in developing countries shows that it is not just a question of governments investing money and technology. It is also about changing ordinary people’s attitudes and behaviours, and this takes time,” he said.

Sanitation can best be addressed by countries establishing and investing in people and systems at a local level to change people’s behaviours, and to get the private sector engaged in providing affordable and good quality products and services for the poor.

This, he said, needs to be led by countries themselves, and donors, international organisations and the private sector all have a role in providing financing and expertise.

He also said there is a growing awareness of the importance of sanitation as a foundation for human and economic development.

World leaders – from the U.N. Secretary-General, to the President of the World Bank, to the Prime Minister of India – are all talking about it.

“We need to translate this high level political support into action in order for all people to have access to what is theirs as a human right: clean drinking water and adequate sanitation,” said Wijesekera.