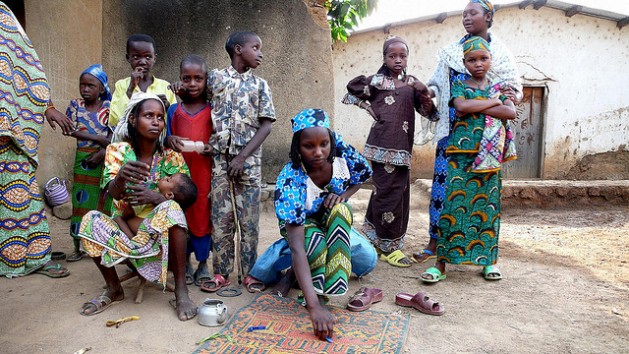 A displaced family in Bouar, Central African Republic. As of February 2014, the town and region around Bouar were experiencing ethnic cleansing, principally against Muslim civilians. Credit: Nicolas Rost for OCHA

UNITED NATIONS, Jun 3 2015 (IPS) - The United Nations, which came under heavy fire for its failure to act swiftly on charges of sexual abuse by French troops in the Central African Republic (CAR) last year, has decided to set up an External Independent Review (EIR) to probe these allegations.

U.N. spokesperson Stephane Dujarric told reporters Wednesday the review will be broad in scope and the composition of the team will be announced next week.

“If Mr. Ban Ki-moon and Member States want to rescue zero tolerance, they must cleanse the UN system of negligence and misconduct once and for all." -- AIDS-Free World

He said the EIR will not only examine the treatment of the specific report of abuse in the Central African Republic – by soldiers not affiliated with the United Nations – but also a broad range of systemic issues related to how the U.N. responds to serious information of this kind.

The establishment of the review panel is also the result of strong criticism from civil society organisations (CSOs), which lambasted the United Nations for its alleged “cover-up” and for not responding fast enough.

Among the allegations were charges that French soldiers traded food in exchange for sex with starving minors and teenagers.

Paula Donovan, co-director of AIDS-Free World, who helped break the story of a long-suppressed report on sexual abuse in CAR, told IPS she welcomes the appointment of the EIR and “it was a step in the right direction.”

But, she cautioned, no one from the U.N. staff or the Secretariat should be associated with the team, primarily because they cannot investigate themselves.

Donovan said she sincerely hopes this EIR is not a thinly-disguised excuse to allow U.N. staffers to refuse to comment on any ongoing or future sexual abuses on the ground because “the panel is at work.”

Amongst the many demands by CSOs was for any review panel to be armed with subpoena powers in order to strengthen the scope of the investigation.

As has been stated over the past few weeks, Dujarric told reporters, Secretary-General Ban Ki-moon “is deeply disturbed by the allegations of sexual abuse by soldiers in the CAR, as well as allegations of how this was handled by the various parts of the U.N. system involved.”

His intention in setting up this review is to ensure that the United Nations does not fail the victims of sexual abuse, especially when committed by those who are meant to protect them.

In a statement released Wednesday, AIDS-Free World, which over the last several weeks has launched its Code Blue campaign demanding answers for the sexual abuse in CAR, said the secretary-general has three challenges.

First, this must be a truly external and independent inquiry. No member of existing U.N. staff should be appointed to investigate nor to act as the investigators’ secretariat.

Second, it must be understood that top members of the secretary-general’s own staff will have to be subject to investigation. This must go right up to the level of under-secretaries general (USG).

No one can be excluded, whether the director of the Ethics Office or the USG of the Office of Internal Oversight Services or the secretary-general’s own Chef de Cabinet.

“It would appear that all of them acted inappropriately in response to the dreadful events in CAR,” the statement said.

Third, the reference in the secretary-general’s announcement to a review of ‘the broad range of systemic issues’ is crucial to the inquiry.

“What happened in the Central African Republic was an atrocity, but the fact that the U.N. stood silent for nearly a year after its own discovery of widespread peacekeeper sexual abuse (even if by non-U.N. troops) is itself a bitter commentary on the Secretary-General’s declared policy of ‘zero tolerance’,” the statement said.

“If Mr. Ban Ki-moon and Member States want to rescue zero tolerance, they must cleanse the UN system of negligence and misconduct once and for all.”

The existence of diplomatic immunity is said to allow perpetrators to go unpunished and avoid legal constraints.

But against the backdrop of the current campaign, called Code Blue, the proposal may be revived, even though it could be shot down by developing countries which provide most of the soldiers in the 16 peacekeeping operations currently under way, with an estimated total of 106,595 military personnel and 17,000 civilian staff.