UNITED NATIONS, Jul 2 2015 (IPS) - Ever since the Monterrey Consensus on Financing for Development in March 2002 called for new and innovative strategies to complement traditional Official Development Assistance (ODA), various financial instruments have been discussed. 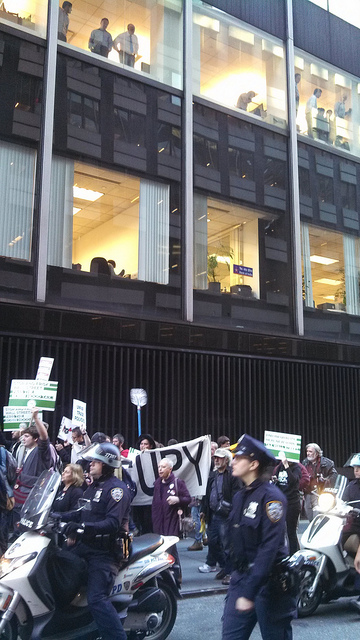 They include a solidarity levy on airplane tickets, debt swaps, measures to combat tax havens and capital flights – and the financial transaction tax (FTT).

With the finance ministers of 11 European countries, Austria, Belgium, Estonia, France, Germany, Greece, Italy, Portugal, Slovakia, Slovenia and Spain, continuing negotiations on the modalities of a future FTT, proponents say it is an opportune moment to look at the controversial tax and its potential as innovative finance mechanism.

Most current discussions on FTTs, including plans on the European Union FTT, involve a small tax on the exchange of financial instruments, such as securities, bonds, shares and derivatives. It would apply to transactions on the wholesale market and not apply to the retail market.

The FTT has two main functions. It is designed to stabilise financial markets by curbing high-frequency trading and speculation, as well as serve as a tool to raise important amounts of revenue, which could be spent, at least in part, on development purposes.

However, there are ongoing debates on the efficiency of an FTT and its potentially damaging effects on the financial sector.

Opponents claim that an EU FTT would cause share-trading to emigrate as happened to Sweden, when it imposed a unilateral FTT about 30 years ago. Such fears have prevented countries with important financial sectors and asset-management industries like the United Kingdom and Luxembourg from consenting to an EU-wide FTT, resulting in the multilateral initiative of the 11 “willing” EU countries instead.

“International targets to tackle poverty and climate were knocked badly off course by the reckless actions of the finance industry. It is only right the sector makes a fair contribution for the damage it caused." -- David Hillman

The London-based Institute of Economic Affairs argues in a 2011 report that the revenue an FTT raises is minimal due to falls in revenue from other taxes. Also, price volatility will increase as financial markets get smaller and decreasing income for companies will ultimately translate in higher prices and lower wages for workers in the whole country.

As reported by the Guardian, Matthew Fell, director for competitive markets at the Confederation of British Industries (CBI), said: “The UK government is right to reject a FTT as damaging for jobs and growth.”

“It is disappointing that eurozone economies are pursuing the FTT, whose costs ultimately fall on consumers and businesses, and will be a drag on the eurozone recovery.”

Proponents of the FTT, such as the Robin Hood Tax Campaign and Stamp Out Poverty, do not consider these arguments valid. They point to the fact that FTTs have already been successfully implemented in many countries and that an EU FTT would increase growth in Europe by 0.2 to 0.4 percent according to the European Commission’s most recent impact assessment.

Tackling climate change, ending poverty and malnutrition, enhancing social and economic development in a sustainable manner – the ambitious post-2015 development framework, which will be adopted this year in September at the U.N., requires considerable financial resources.

Those in favour of an FTT also acknowledge its potential as an innovative finance mechanism and confirm that chances to implement the Sustainable Development Goals (SDGs) will increase markedly if a sufficiently significant part of the money raised by means of the tax is spent on humanitarian purposes, climate change and development.

David Hillman, spokesperson for the United Kingdom’s Robin Hood Tax campaign, told IPS: “One of the great benefits of the Financial Transaction Tax is that it’s a proven revenue raiser. Many FTTs already exist around the world today that collectively raise at least 30 billion dollars a year.”

“International targets to tackle poverty and climate were knocked badly off course by the reckless actions of the finance industry. It is only right the sector makes a fair contribution for the damage it caused. Because financial markets have grown so large, the FTT is capable of raising the levels of finance needed to tackle these issues.”

Commenting on the EU FTT, she told IPS: “Key benefits of the FTT are the considerable revenue it can generate and its steering effect, i.e. the fact that it reduces the profitability of high-frequency-trading, stimulates long-term orientation and thus helps to build a sustainable financial system.”

“Provided that the FTT encompasses all financial instruments, it can generate a considerable revenue, even if the tax rates end up being lower than those provided for in the EU Commission draft.”

The proposal by the EU Commission currently requires the 11 participating member states to set tax rates to levels not lower than 0.1 percent on conventional transactions and 0.01 percent on derivatives in view of the notional value.

According to Bloomberg Business, the 11 EU member states continue quarreling over the details of a future EU FTT, especially over which trades to tax, the amount of revenue the tax should raise and modes of tax collection.

Another important point of debate is what the money raised should be spent on. In the past, both German Chancellor Angela Merkel and French President François Hollande have recognised the need to spend at least a part of the revenue on climate change and development objectives.

It remains to be seen if the potential of the FTT as Innovative Finance Mechanism will be taken advantage of to a greater extent in the future. Decisions regarding what share of the tax will be spent on development are made on the national level and depend on political will.

However, this year’s discussions on financing for development and the adoption of the SDGs at the U.N. might allow for a fruitful climate as a basis for further-reaching political decisions.