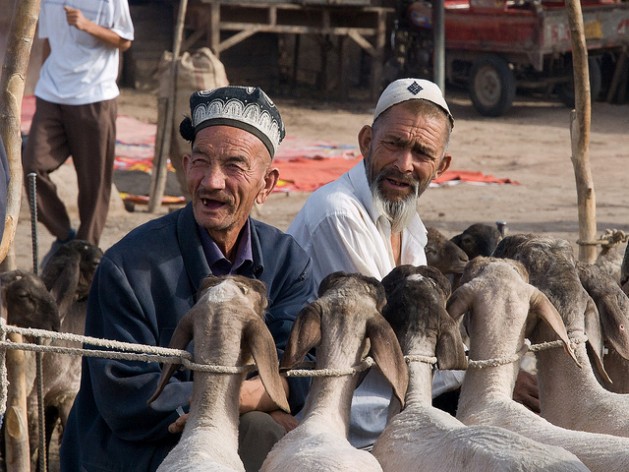 Uyghurs, a minority Muslim group in China, say they have faced years of oppression under Chinese rule. Credit: Gustavo Jeronimo/CC-BY-2.0

WASHINGTON, Jul 23 2015 (IPS) - Two reports released in quick succession by the international rights group Human Rights Watch have highlighted the plight of China’s minority Uyghur population and shed light on their continuing struggle to find a safe haven elsewhere in the region.

“The international community needs to take a firm stand to guarantee the rights of Uyghur refugees." -- Alim A. Seytoff, president of the Uyghur American Association
The international watchdog released a statement on Jul. 10 condemning the Thai government for returning 100 Uyghur immigrants to China, claiming that they will face persecution in country.

The Uyghurs have struggled against the control of the Chinese central government for decades, with many of its activists exiled or imprisoned.

Another HRW report released on Jul. 13 revealed the Chinese government’s restrictions on international travel for religious minorities, including the Uyghurs, for “religious study and pilgrimage.”

A fast-track passport application system made available 12 years ago excluded the Uyghurs and other minorities, the report said.

“The restrictions also violate freedom of belief by denying or limiting religious minorities’ ability to participate in pilgrimages outside China,” she added.

The Turkish Ministry of Foreign Affairs released a press statement on Jul. 9 that condemned Thailand for returning the Uyghurs to China. The deportations have sparked protests in front of the Chinese embassy and Thailand’s honorary consulate in Turkey.

The Xinjiang Uyghur Autonomous Region (XUAR) is located in western China, more than 3,000 km from the capital Beijing. Also known as East Turkestan, the region is home to ethnic groups that have Turkish descent and speak Turkic languages.

According to the Uyghur American Association, there are over 15 million Uyghurs in the region. Uyghurs are traditionally Muslims. Alim A. Seytoff, president of the Uyghur American Association based in Washington, D.C., said in a statement that the forcible return of Uyghur refugees was a violation of their safety.

“The international community needs to take a firm stand to guarantee the rights of Uyghur refugees,” he said. “As more Uyghurs flee China’s heavy-handed repression in East Turkestan, and Beijing continues to pressure for their return, concerned governments and multilateral agencies must not permit China to disregard international human rights norms.”

In addition to the restrictions imposed on travel for pilgrimage activities, Uyghurs in China are also reported to face various restrictions that prohibit them from observing the religious fast during the holy month of Ramadan, one of the important months for Islamic countries and communities around the world.

The Xinjiang legislature passed a regulation in January that banned the wearing of the burqa, a headscarf donned by Muslim women.

“This is not a new restriction,” Greg Fay, project manager at the Washington, D.C. based Uyghur Human Rights Association, told IPS. “The restrictions have been getting stricter in the past two years.”

Uyghurs have had an uneasy relationship with Beijing ever since the establishment of the People’s Republic of China in 1949.

A spate of violent attacks in the past year resulted in the government’s vow to “fight against separatism, religious extremism and terrorism” during a yearlong, anti-terror crackdown. Arrests doubled in 2014 since the government announced the crackdown, amounting to 27,164 cases.

In March 2014, a knife attack in Kunming, 2,677 km from Beijing, left 30 people dead. Two months later, a bomb was set off in Urumqi, the capital of Xinjiang, which killed 31 people. In July, an attack on police stations, government offices and vehicles in Xinjiang left at least 50 people dead.

Officials blamed Xinjiang separatists for the attacks. Earlier in 2009, a riot in Urumqi killed nearly 140 people and the government shut off Internet access in the province for months.

“My interpretation of what is happening now is the government has put out a policy of opposing extremism,” Sean Roberts, associate professor at George Washington University, told IPS in an interview. “I think for a lot of local level officials they are just identifying Islam as extremism.”

Seytoff said in an opinion piece in Al Jazeera published in June 2014 that even though the Uyghurs occupy an autonomous region, most Han officials, the majority ethnic group in China, still hold political and economic power in the region.

“China ruthlessly suppressed any sign of Uyghur unrest and transferred millions of loyal Chinese settlers into East Turkestan, providing them with jobs, housing, bank loans and economic opportunities denied to Uyghurs,” he said.

“The Uyghur population in East Turkestan, which was nearly 90 percent [of the area’s total population] in 1949, is now only 45 percent, while the Chinese population grew disproportionately due to state-sponsored mass settlement from around six percent in 1953 to the current 40 percent.” Protestors wave the Uyghur flag outside the White House, demanding rights for the minority population in China. Credit: Malcolm Brown/CC-BY-SA-2.0

Many Uyghurs attempt to flee persecution to Turkey and neighboring Asian countries. Turkey has hosted over 1,000 Uyghur refugees since 1949, but neighboring countries such as Cambodia and Thailand have returned a number of Uyghurs to China.

A New York Times article in Dec. 2009 revealed that Cambodia returned 20 Uyghurs who applied for asylum in 2009—and signed an economic cooperation deal with China two days later.

The Chinese deny any form of oppression of the Uyghurs and insist that Cambodia’s act of repatriation was legal.

Other Chinese state news agencies have claimed that, far from prohibiting the celebration of Ramadan, the government has supported locals in their worship by proving food and ensuring peace.