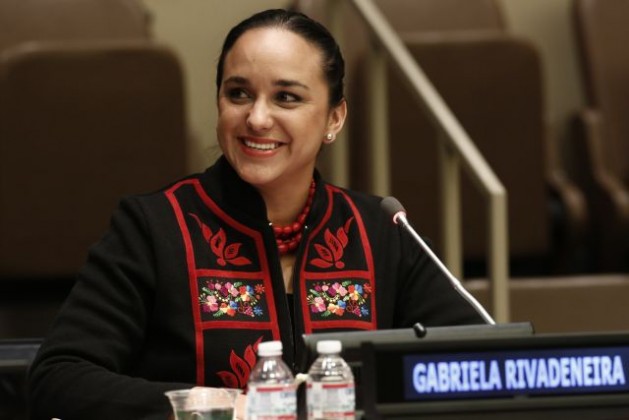 Gabriela Rivadeneira, President of the National Assembly of Ecuador, addresses the 2015 Economic and Social Council (ECOSOC) Youth Forum on the theme, “Youth Engagement in the Transition from the Millennium Development Goals to Sustainable Development Goals: What will it take?” Credit: UN Photo/Evan Schneider

UNITED NATIONS, Jul 27 2015 (IPS) - When the 21-year-old Crown Prince of Jordan, Al Hussein bin Abdullah II, presided over a Security Council meeting last April, he was described as the youngest ever to chair one of the U.N.’s most powerful political bodies armed with powers to wage wars and declare peace.

The seat was temporarily his because Jordan held the rotating monthly presidency of the 15-member Security Council in April.

"Another Diversity Contest could be a possibility as indeed could many other initiatives that work the same way - summoning creative and constructive conscience to achieve very specific results.” -- Ramu Damodaran

This is a very powerful era for youth, Ban said, and there is a very important role for educators to teach them what would be significant to become a global citizen, to become a leader in the future.

As the United Nations spearheads a major effort to end hate and extremism worldwide, it is turning to the world’s younger generation to lead the battle against intolerance, including homophobia, racism, gender-based discrimination and xenophobia.

The U.N. Academic Impact (UNAI), which was launched in 2010 and is playing a key role in countering extremism at the grassroots level, is described as an initiative that aligns institutions of higher education with the United Nations in realising the universally accepted principles in human rights, literacy, sustainability and conflict resolution.

Currently, about 30 international networks of universities and other institutes of higher learn have endorsed UNAI – encouraging nearly a 1,000 individual institutions to join the grassroots campaign.

Ramu Damodaran, chief of the U.N. Academic Impact (UNAI) Secretariat in the Outreach Division of the Department of Public Information (DPI), told IPS: “We have worked with educational institutions and other members of civil society for more than 11 years now in a seminar series titled ‘Unlearning Intolerance’.”

Last month, the UNAI collaborated with United Colours of Benetton’s “UnHate Foundation” (making sure it would not be misconstrued as a “UN Hate Foundation”) for a Diversity Contest to “showcase the engagement of young people around the world, and the innovation, energy and commitment they bring to personally-crafted solutions that address some of the world’s most pressing issues,” said Damodaran, who is also Deputy Director for Partnerships and Public Engagement.

When the U.N. Academic Impact was devised some six years ago, it was clear this should become one of its core principles, he added.

And “when the UnHate Foundation approached us with this initiative,” Damodaran told IPS, “we leapt at the opportunity since the project goes beyond talking or debating about the vital issues of diversity and respect, to actually funding specific projects – and as many as 10 of them – which further this goal.”

What is more, he said, every aspect is managed by students and young faculty – visualising a project, estimating its scope and costs and then, if it is selected, managing its successful execution.

A panel of judges picked 10 winners who received 20,000 Euros each donated by United Colors of Benetton based in Italy.

Asked if it will be an annual event, he said: “We look forward to continued opportunities to work with the UnHate Foundation – another Diversity Contest could be a possibility as indeed could many other initiatives that work the same way, summoning creative and constructive conscience to achieve very specific results.”

The United Nations says the contest was noteworthy for several reasons.

First, rather than asking “amateurs” to simply write about world problems, this contest took a proactive approach and invited solutions and, even more ambitiously, gave them truly significant financial resources to carry out their solutions.

“This is real empowerment of civil society, and of youth, to change the world, as many of the winners rightly acknowledged in their reactions to winning the award,” said the United Nations in a statement released here.

The range of intolerance addressed was truly impressive, ranging from the empowerment and education of women, to LGBT (lesbian, gay, bisexual and transgender) rights, indigenous rights, and proposals to confront intolerance among major religions and conflicts between ethnic groups.

The proposed projects are expected to facilitate secondary and tertiary educations for indigenous women in southern India; promote harmony and knowledge of each other’s faith among Christians, Hindus and Muslims in Pakistan; challenge prejudice and discrimination faced by LGBT peoples in India and Mexico; provide a safe space for women in China to discuss difficult issues; work to resolve conflicts over water in order to decrease ethnic conflict in Burundi; encourage greater acceptance of migrant populations in South Africa; promote acceptance of marginalised groups in Mexico; promote greater employment opportunities for Muslim women in Germany; document the voices of Mexican immigrants to the United States and portray the day to day lives and aspirations of Palestinians from diverse backgrounds.

Meanwhile, the secretary-general has identified several other UNAI initiatives that help the United Nations.

Ban said researchers from the University of Edinburgh were part of a team that addressed the origins of the Ebola virus that caused last year’s deadly outbreak.

The Dr. B.N. College of Architecture for Women in India is working with partners in Tanzania on sustainable housing.

And the Education Above All Foundation in Qatar, chaired by Sheikha Mozah, is defending the right of children to continue learning in danger zones.