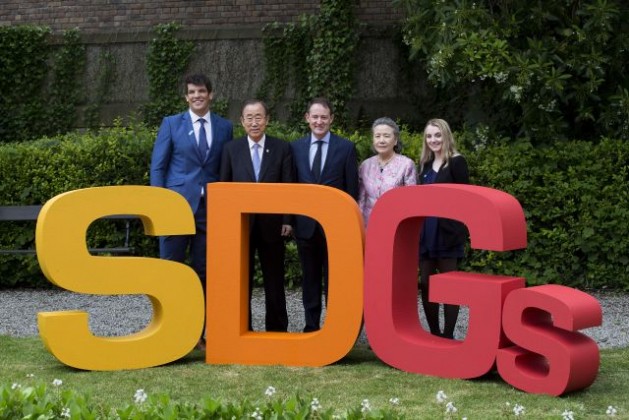 UNITED NATIONS, Jul 29 2015 (IPS) - The U.N.’s highly ambitious post-2015 development agenda, which is expected to be finalised shortly, has come fire even before it could get off the ground.

“We hoped for a progressive and fair financing agreement that addressed the root causes of global economic inequality and its impact on women’s and girls’ lives. But that’s not what we got." -- Shannon Kowalski

Savio Carvalho of Amnesty International (AI), which is part of the UNMG, told IPS the post-2015 agenda has become an aspirational text sans clear independent mechanisms for people to hold governments to account for implementation and follow-up.

“Under the garb of national ownership, realities and capacities, member states can get away doing absolutely nothing. We would like them to ensure national priorities are set in conformity with human rights principles and standards so that we are not in the same place in 2030,” he added.

The 17 SDGs, which are to be approved by over 150 political leaders at a U.N. summit meeting in September, cover a wide range of socio-economic issues, including poverty, hunger, gender equality, sustainable development, full employment, quality education, global governance, human rights, climate change and sustainable energy for all.

All 17 goals, particularly the eradication of extreme poverty and hunger worldwide, are expected to be met by the year 2030.

The proposed follow-up and review, as spelled out, lacks a strong accountability mechanism, “with several references to national sovereignty, circumstances and priorities which risk undermining the universal commitment to deliver on the SDGs,” says UNMG.

“We are wondering how committed member states will be able to ensure genuine public participation, in particular of the most marginalised in each society, in decisions that will have an impact on their lives.”

This applies also to questions related to financing (budget allocations) in the actual implementation of the agenda, says a statement titled “Don’t break Your Promise Before Making it”.

“We are keen to ensure that people are able to hold governments to account to these commitments so that these goals are delivered and work for everyone,” says UNMG, which includes a number of coalitions and networks who will be monitoring the post-2015 process.

Asked about the composition of the UNMG, Jaimie Grant, who represents the secretariat for Persons with Disabilities, told IPS that UNMG is the official channel for the public to engage with the United Nations on matters of sustainable development.

“Across all these groups, stakeholders and networks, we share some very broad positions, but there are many thousands of organisations feeding in to it, in various capacities, with various positions and priorities,” he explained.

Adding strength to the chorus of voices from the opposition, the Women’s Major Groups, representing over 600 women’s groups from more than 100 countries, have also faulted the development agenda, criticising its shortcomings.

Shannon Kowalski, director of Advocacy and Policy at the International Women’s Health Coalition, told IPS the SDGs could be a major milestone for women and girls.

They have much to gain: better economic opportunities, sexual and reproductive health care and information and protection of reproductive rights, access to education, and lives free from violence, she noted.

“But in order to make this vision a reality, we have to ensure gender equality is at the heart of our efforts, recognising that it is a prerequisite for sustainable development,” she added.

Kowalski also expressed disappointment over the outcome of the recently concluded conference on Financing for Development (FfD) in Addis Ababa.

“We hoped for a progressive and fair financing agreement that addressed the root causes of global economic inequality and its impact on women’s and girls’ lives. But that’s not what we got,” she said.

“We expected strong commitments on financing for gender equality and recognition of the value of women’s unpaid care work. We expected governments to address the systemic drivers of inequalities within and between countries, to establish fair tax policies, to stop illicit financial flows, and to address injustices in international trade structures that disadvantage the poorest countries.”

“We were disappointed that there were no new commitments to increase public financing in order to achieve the SDGs,” Kowalski declared.

Carvalho of Amnesty International said, “It will be impossible to achieve truly transformative sustainable development and to leave no one behind without conducting regular, transparent, holistic and participatory reviews of progress and setbacks at all levels.”

“The agenda acknowledges the need for international financial institutions (IFIs) to respect domestic policy, but does not go far enough to ensure that their activities do not contribute to any human rights violations.”

“I think we need to strengthen the argument for the agenda to be universal – when all countries have to deliver on their commitments and obligations.”

These, he said, include Official Development Assistance (ODA) and tax justice.

Meanwhile, in a statement released to IPS, Beyond 2015, described as a global civil society campaign pushing for a strong successor to the Millennium Development Goals (MDGs), said “for the SDGs to have a real impact on people’s lives everywhere, people themselves must participate in implementing the goals and reviewing progress, and be active agents in decisions affecting them.”

The Beyond 2015 Campaign said it welcomes the focus on inclusion and participation reflected in the current draft that is being negotiated at the United Nations, and “we count on governments to translate their commitments into action as soon as the SDGs are adopted.”

In implementing the SDGs, it is crucial that states honour their commitment to “leave no one behind”.

“This means tracking progress for all social and economic groups, especially the most vulnerable and marginalized, drawing upon data from a wider range of sources, and regular scrutiny with the involvement of people themselves,” the statement added.

Additionally, an even higher level of participation and inclusion is needed, at all levels, when implementation starts.

“People must be aware of the new agenda and take ownership of the goals for real and sustainable changes to occur.”

The Beyond 2015 campaign also welcomed the commitment to an open and transparent follow-up framework for the SDGs, grounded in people’s participation at multiple levels.

“We believe the current draft could be improved by including specific time-bound commitments and endorsing civil society’s role in generating data to review commitments,” it said.