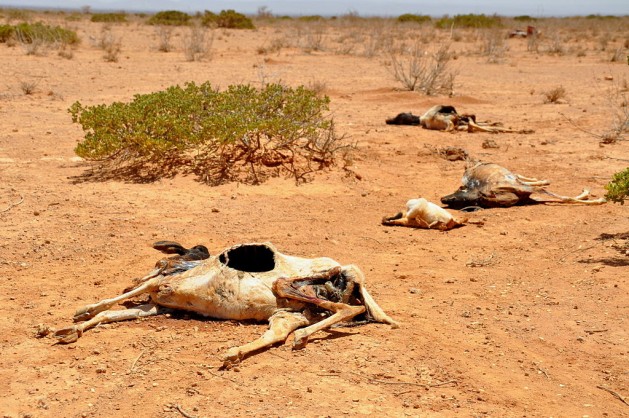 Carcases of dead sheep and goats stretch across the landscape following drought in Somaliland in 2011, one of the climate impacts that experts say should be actively tackled by African countries themselves without passively relying on international assistance. Photo credit: Oxfam East Africa/CC by 2.0

PARIS, Jul 23 2015 (IPS) - African countries would do well to take their own lead in finding ways to better adapt to and mitigate the changes that climate may impose on future  generations instead of relying only on foreign aid.

This was one of the messages that rang out during the international scientific conference on ‘Our Common Future under Climate Change’ held earlier this month in Paris, six months before the United Nations Climate Change Conference (COP21), also to be held in Paris, that is supposed to pave the way for a global agreement to keep the rise in the Earth’s temperature under 2°C.

Africa is already feeling climate change effects on a daily basis, according to Penny Urquhart from South Africa, an independent specialist and one of the lead authors of the 5th Assessment Report from the Intergovernmental Panel on Climate Change (IPCC).

Projections suggest that temperature rise on the continent will likely exceed 2°C by 2100 with land temperatures rising faster than the global land average. Scientific assessments agree that Africa will also face more climate changes in the future, with extreme weather events increasing in terms of frequency, intensity and duration.

“Most sub-Saharan countries have high levels of climate vulnerability,” Urquhart told IPS. “Over the years, people became good at adapting to those changes but what we are seeing is increasing risks associated with climate change as this becomes more and more pressing.”

Although data monitoring systems are still poor and sparse over the region, “we do know there is an increase in temperature,” she added, warning that if the global average temperature increases by 2°C by the end of the century, this will be experienced as if it had increased by 4°C in Southern Africa, stated Urquhart.

According to the South African expert, vulnerability to climate variation is very context-specific and depends on people’s exposure to the impacts, so it is hard to estimate the number of people affected by global warming on the continent.

However, IPCC says that of the estimated 800 million people who live in Africa, more than 300 million survive in conditions of water scarcity, and the numbers of people at risk of increased water stress on the continent is projected to be 350-600 million by 2050.

In some areas, noted Urquhart, it is not easy to predict what is happening with the rainfall. “In the Horn of Africa region the observations seem to be showing decreasing rainfall but models are projecting increasing rainfall.”

There have been extreme weather events along the Western coast of the continent, while Mozambique has seen an increase in cyclones that lead to flooding. “Those are the sum of trends that we are seeing,” Urquhart, “drying mostly along the West and increase precipitations in the East of Africa”.

For Edith Ofwona, senior programme specialist of the International Development Research Centre (IDRC), one of the sectors most vulnerable to climate variation in Africa is agriculture – the backbone of most African economies – and this could have direct negative impacts on food security.

“The biggest challenge,” she said, “is how to work with communities not only to cope with short-term impacts but actually to be able to adapt and be resilient over time. We should come up with practical solutions that are affordable and built on the knowledge that communities have.”

Experts agree that any measure to address climate change should be responsive to social needs, particularly where severe weather events risk uprooting communities from their homelands by leaving families with no option but to migrate in search of better opportunities.

This new phenomenon has created what it is starting to be called “climate migrants”, said Ofwona.

Climate change could also exacerbate social conflicts that are aggravated by other drivers such as competition over resources and land degradation. According to the IDRC expert, “you need to consider the multi-stress nature of poverty on people’s livelihoods … and while richer people may be able to adapt, poor people will struggle.”

Ofwona said that the key is to combine scientific evidence with what communities themselves know, and make it affordable and sustainable. “It is important to link science to society and make it practical to be able to change lives and deal with the challenges people face, especially in addressing food security requirements.”

Meanwhile, she added, consciousness in Africa of the impacts of climate change is “fairly high” – some countries have already defined their own climate policies and strategies, and others have green growth strategies with low carbon and sustainable development.

Stressing the critical role that African nations themselves play in terms of creating the right environmental policy, Ofwona said that they should be protagonists in dealing with climate impacts and not only passive in receiving international help.

African governments should provide some of the funding that will be needed to implement adaptation and mitigation projects and while “we can also source internationally, to some extent we need to contribute with our own money. While the consciousness is high, the extent of the commitment is not equally high.”