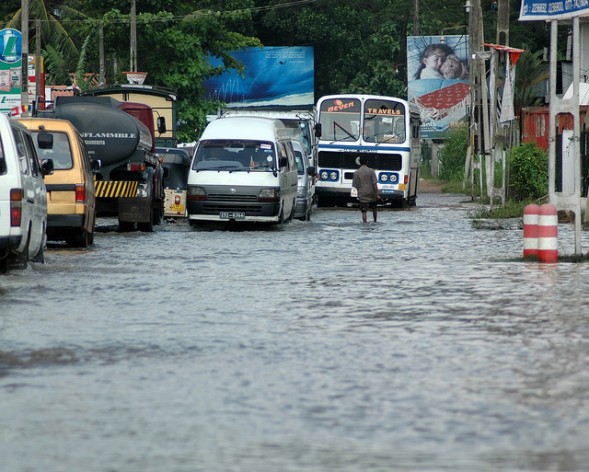 Motorists navigate a flooded stretch of road in the town of Ragama, just north of Colombo. Credit: Amantha Perera/IPS

UNITED NATIONS, Jul 3 2015 (IPS) - The most devastating impact of climate change – including rising sea levels, floods, cyclones and both droughts and heavy monsoons – will be felt mostly by the world’s poorest nations.

To meet these impending threats – which will destroy countless human lives and ravage agricultural crops – the United Nations is seeking a hefty 100 billion dollars per year by 2020 as part of a Green Climate Fund (GCF) aimed at supporting developing countries strengthen their resilience and help adapt themselves to meet the foreboding challenges.

“The challenge is: how do we make sure that the world spends the money earmarked to avoid serious climate change efficiently and effectively?" -- Lisa Elges of Transparency International

Secretary-General Ban Ki-moon told a high-level meeting on climate change last week: “I will pro-actively engage with leaders from both the global north and south to make sure this goal is met and is considered credible by all.”

The Green Climate Fund, headquartered in Incheon, South Korea, must be “up and running”, he said, with funds that can be disbursed before a key meeting on climate change in Paris in December.

Asked if the ambitious 100-billion-dollar target was realistic, Lisa Elges, Head of Climate Policy at Transparency International, told IPS: “The more practical question is: how can he achieve the target?”

Public purses are stretched, yet public finance is still necessary. And if you want to involve the private sector, you need public finance to give subsidies and attract and leverage private investments, she added.

Elges said one ‘untapped’ source of finance could be the crackdown on illicit financial flows.

For example, if countries tackle money laundering, they can make more taxable money available to address the world’s environmental and development needs.

“When the corrupt lose, the people and planet will gain,” she said.

Michael Westphal, a Senior Associate in the Sustainable Finance team at the World Resources Institute (WRI), told IPS a politically feasible path to reach 100 billion dollars (per year) in international climate funding by 2020 is to include a larger set of climate finance sources and scaling up all public finance.

Reaching the 100-billion-dollar target is possible, he said, but warned it will take a concerted action by public actors to use public finance to leverage private sector investment.

In paper on climate funding, WRI discuss a number of recommendations.

Firstly, developed nations should commit to increasing all public funding flows to 2020.

Secondly, developed countries should consider using new and innovative sources of finance toward the 2020 goal, including redirected fossil fuel subsidies, carbon market revenues, financial transaction taxes, export credits, and debt relief – many of which have been little used to mobilise climate finance.

And thirdly, parties should clarify the definition of climate finance and development of methodologies, including those for calculating and attributing leveraged private sector investment, to improve accounting and reporting.

At a summit meeting of the Group of 20 industrial nations in Australia last November, U.S. President Barack Obama announced a contribution of 3.0 billion dollars to help the world’s poorest nations fight climate change.

Even before Obama’s pledge, the New York Times reported that at least 10 countries, including France, Germany, and South Korea, had pledged a total of around 3.0 billion dollars to the fund.

The U.S. contribution was followed by a pledge of 1.5 billion dollars by Japan.

Back in November 2014, Hela Cheikhrouhou, executive director of the Fund, was quoted as saying: “The contribution by the U.S. will have a direct impact on mobilizing contributions from the other large economies.

It is imperative, he pointed out, that developed countries provide greater clarity on the public finance component of the 100 billion before Paris, as well as on how they will engage private finance

An agreement must also acknowledge the need for long-term, very significant financing beyond 2020.

“I welcome the recent announcement by Germany to double its climate finance support by 2020, and encourage other developed countries to follow this example,” he implored.

According to the United Nations, a summit meeting of world leaders last September catalysed “much-needed momentum” on climate finance.

“Public and private sector leaders pledged to mobilise over 200 billion dollars by the end of 2015 to finance low-carbon, climate-resilient growth.”

A meeting in Lima, Peru last December pledged 10 billion dollars for the initialisation of the Green Climate Fund, according to a U.N. statement.

Providing a different perspective, Elges of Transparency International (TI) told IPS: “The challenge is: how do we make sure that the world spends the money earmarked to avoid serious climate change efficiently and effectively? If that money goes astray, it could have disastrous consequences on the ground.”

She said there is also the corruption threat of lobby groups – for example, in the fossil fuel industries – in developed countries like the U.S. or the UK, who are able to influence long-term climate policy for short-term gain.

For example: 550 billion dollars per year go to fossil fuel in the form of subsidies, often resulting from corruption and undue influence.

In developing countries, the greater issue is weak governance: in practice, laws on transparency and accountability are not being respected.

One of our priorities at TI is to strengthen these areas of government and help citizens scrutinise hold their leaders to account.

Corruption is a global phenomenon: it affects all countries, albeit in different ways and it can affect every aspect of life, including our global response to climate change, she declared.

Asked if there is a U.N. role in battling corruption in climate change, Elges said climate change, human rights and transnational crime are all covered by U.N. treaties and compliance bodies.

The U.N. therefore has a huge role to play – politically and practically, to improve coordination against corruption across the board, and around the world, she declared.