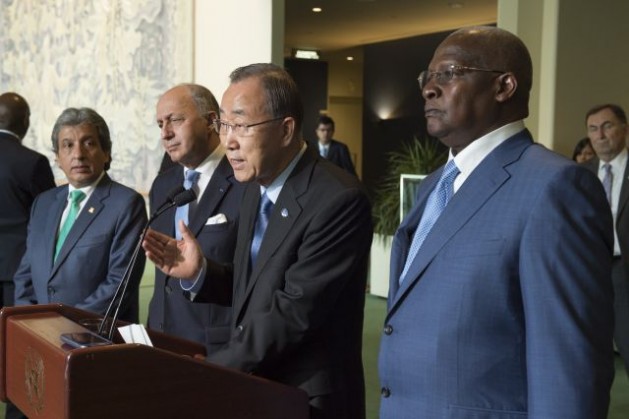 The Secretary-General (second from right), accompanied by Manuel Pulgar-Vidal (left), Minister of the Environment of Peru, Laurent Fabius (second from left), Minister for Foreign Affairs of France and Sam Kutesa (right), President of the sixty-ninth session of the General Assembly, at a press encounter on the General Assembly’s high-level meeting on climate change. Credit: UN Photo

UNITED NATIONS, Jun 29 2015 (IPS) - When the 193-member General Assembly hosted a high level meeting on climate change Monday, Secretary-General Ban Ki-moon warned that any proposed agreement at an upcoming international conference in Paris in December must uphold the principle of equity.

The meeting, officially known as the Conference of the Parties on Climate Change (COP 21), should approve a universally-binding agreement that will support the adaptation needs of developing nations and, more importantly, “demonstrate solidarity with the poorest and most vulnerable countries through a focused package of assistance,” Ban told delegates.

“There can no longer be an expectation that global action or decisions will trickle down to create local results." -- Roger-Mark De Souza

The secretary-general is seeking a staggering 100 billion dollars per year by 2020 to support developing nations and in curbing greenhouse gas emissions and strengthening their resilience.

Some of the most threatened are low-lying islands in the Indian Ocean and the Pacific that are in danger of being wiped off the face of the earth due to rising sea-levels caused by climate change.

“Weather-related disasters are more frequent and more intense. Everyone is affected – but not all equally,” he said, emphasising the inequities of the impact of climate change.

Sam Kutesa, President of the 69th session of the U.N. General Assembly, who convened the high-level meeting, said recurring disasters are affecting different regions as a result of changing climate patterns, such as the recent cyclone that devastated Vanuatu, that “are a matter of deep concern for us all”.

He said many Small Island Developing States (SIDS), such as Kiribati, are facing an existential threat due to rising sea levels, while other countries are grappling with devastating droughts that have left precious lands uninhabitable and unproductive.

“We are also increasingly witnessing other severe weather patterns as a result of climate change, including droughts, floods and landslides.

“In my own country Uganda,” he pointed out, “the impact of climate change is affecting the livelihoods of the rural population who are dependent on agriculture.”

Striking a positive note, Ban said since 2009, the number of national climate laws and policies has nearly doubled, with three quarters of the world’s annual emissions now covered by national targets.

“The world’s three biggest economies – China, the European Union (EU) and the United States – have placed their bets on low-carbon, climate-resilient growth,” he added.

Resilience has the potential to be a transformative strategy to address climate fragility risks by allowing vulnerable countries and societies to anticipate, adapt to and emerge strong from climate shocks and stresses.

Three key interventions at the international level, and in the context of the climate change discussions leading up to Paris and afterwards, will unlock this transformative potential, he said.

Third, strengthening partnerships across these levels is vital – across key sectors including new technologies and innovative financing such as sovereign risk pools and weather based index insurance, and focusing on best practices and opportunities to take innovations to scale.

“There can no longer be an expectation that global action or decisions will trickle down to create local results, and this must be deliberately fostered and supported through foresight analysis, by engaging across the private sector, and through linking mitigation and adaptation policies and programmes,” De Souza told IPS.

Asked about the serious environmental consequences of the ongoing conflicts in the Middle East, Ban told reporters Monday political instability is caused by the lack of good governance and social injustice.

But if you look at the other aspects, he argued, abject poverty and also environmental degradation really affect political and social instability because they affect job opportunities and the economic situation.

Therefore, “it is important that the benefits of what we will achieve through a climate change agreement will have to help mostly the 48 Least Developed Countries (described as “the poorest of the world’s poor”) – and countries in conflict,” he added.

Robert Redford, a Hollywood icon and a relentless environmental advocate, made an emotional plea before delegates, speaking as “a father, grandfather, and also a concerned citizen – one of billions around the world who are urging you to take action now on climate change.”

He said: “I am an actor by trade, but an activist by nature, someone who has always believed that we must find the balance between what we develop for our survival, and what we preserve for our survival.”

“Your mission is as simple as it is daunting,” he told the General Assembly: “Save the world before it’s too late.”

Arguing that climate change is real – and the result of human activity – Redford said: “We see the effects all around us–from drought and famine in Africa, and heat waves in South Asia, to wildfires across North America, devastating hurricanes and crippling floods here in New York.”

A heat wave in India and Pakistan has already claimed more than 2,300 lives, making it one of the deadliest in history.

All the years of the 21st century so far have ranked among the warmest on record. And as temperatures rise, so do global instability, poverty, and conflict, he warned.