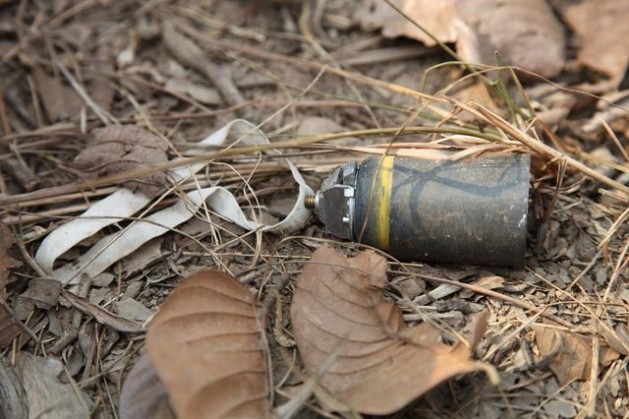 Carried out between late April and mid-July 2015, the attacks are believed to have killed at least 13 people, including three children, and wounded 22 others, according to an Aug. 26 report by Human Rights Watch (HRW).

The rights group believes the rockets were launched from Saudi Arabia, which has been leading a coalition of nine Arab countries in a military offensive against armed Houthi rebels from northern Yemen who ousted President Abu Mansur Hadi earlier this year.

Banned by a 2008 international convention, cluster munitions are bombs or rockets that explode in the air before dispersing many smaller explosives, or ‘bomblets’, over a wide area.

“Weapons used in these particular attacks were U.S.-made M26 rockets, each of which contain 644 sub-munitions and that means that any civilian in the impact area is likely to be killed or injured,” Ole Solvang, a senior research at HRW, said in a video statement released Thursday.

According to HRW, a volley of six rockets can release over 3,800 submunitions over an area with a one-kilometer radius. M26 rockets use M77 submunitions, which have a 23-percent ‘failure rate’ as per U.S. military trials – this means unexploded bombs remain spread over wide areas, endangering civilians, and especially children.

Local villages told HRW researchers that at least three people were killed when they attempted to handle unexploded submunitions.

The attack sites lie within the Haradh and Hayran districts of the Hajja governorate, currently under control of Houthi rebels, and include the villages of Al Qufl, Malus, Al Faqq and Haradh town – all located between four and 19 km from the Saudi-Yemeni border.

Given the attacks’ proximity to the border, and the fact that Bahrain, Egypt, and the United Arab Emirates (UAE) – all members of the Arab Coalition – possess M26 rockets and their launchers, HRW believes the cluster munitions were “most likely” launched from Saudi Arabia.

One of the victims was 18-year-old Khaled Matir Hadi Hayash, who suffered a fatal injury to his neck on the morning of Jul. 14 while his family were taking their livestock out to a graze in a field just four miles from the Saudi border.

Hayash’s brother and three cousins also suffered injuries, and the family lost 30 sheep and all their cows in the attack.

In the village of Malus, residents provided HRW with the names of at least seven locals, including three children, who were killed in a Jun. 7 attack.

A 30-year-old shopkeeper in Malus described the cluster bombing as follows:

“I saw a bomb exploding in the air and pouring out many smaller bombs. Then an explosion threw me on the floor. I lost consciousness and somebody transferred me to the hospital with burns and wounds on the heels of the feet and fragmentation wounds on the left side of my body.”

A thirteen-year-old caught in the same attack succumbed to his injuries in a local hospital. The boy is now buried in the neighbouring Hayran District.

“I didn’t even take [his body] back home,” the father of the deceased teenager told HRW. “Residents of the village all fled. You can’t find anyone there now.”

These seven attacks are not the first time that banned weapons have made in appearance in the embattled nation of 26 million people.

Saudi Arabia, Yemen and the United States all remain non-signatories to the 2008 Convention on Cluster Munitions, which currently counts 94 states among its parties.

A further 23 countries have signed but not ratified the treaty.