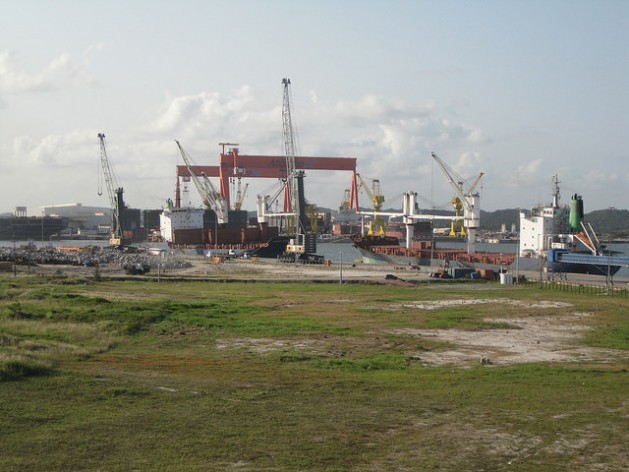 The South Atlantic Shipyard is the biggest in Suape Port, in the Northeast Brazilian state of Pernambuco, where oil tankers have been built after a slow start that threatened to put an end to the project. Credit: Mario Osava/IPS

RIO DE JANEIRO, Sep 4 2015 (IPS) - Besides suffering from macroeconomic imbalances, like a drop in GDP, a high inflation rate and a large public deficit, Brazil is experiencing heavy losses as many oil industry and logistical works grind to a halt.

Much of the infrastructure under construction is part of a cycle that is coming to an end, of rising demand for and prices of raw materials.

China’s economic slowdown has had an especially big impact on iron ore, the price of which has plunged more than 60 percent since 2013. This will hinder the viability of several iron deposits in Brazil, as well as two railways under construction in the Northeast, which now have an uncertain future.

The West-East Integration Railway (FIOL), designed to cross the state of Bahia, connecting soy-producing areas with the coast, depends on the start of operations in an iron mine in Caetité, 380 km as the crow flies from the port city of Ilheus.

A similar situation is now faced by the Transnordestina railway farther north, which is to link another mining and agricultural area to two ports. “But the mine doesn’t even exist there yet,” said Newton de Castro, a professor at the Federal University of Rio de Janeiro.

“Low-grade iron ore is pushed out of the market when demand goes down, affecting the railroads that transport it,” de Castro, an engineer with a PhD in transport systems, told IPS. He criticised “badly designed projects” that have mushroomed in Brazil in recent years to fill a gap in infrastructure.

Doubts about the viability of the Caetité mine have undermined the construction of Porto Sul, the port that is the endpoint of the Fiol railway. Construction of the megaport has not yet begun, and work on the railroad has stalled, and it was left out of the government plan for the expansion of transport routes.

More progress has been made on the Transnordestina line, which benefits from the existence of two port destinations that are also industrial complexes: Suape in the Northeast state of Pernambuco and Pecém in one of the country’s northernmost states, Ceará.

But the deposit of iron and other minerals that it was built to serve has been abandoned since its owner Eike Batista, once known as the richest person in Brazil, went bankrupt.

Another major infrastructure project, the expansion of the Carajás railroad by the country’s biggest mining company, Vale, is on a better footing. “It will transport excellent quality mineral and the cost will be low, because it involves expanding already-existing infrastructure,” Castro said.

The new reality of lower demand and prices “will push out of the market mines that are more costly to operate, and small mining companies,” favouring the predominance of big firms like Vale, the British-Australian Rio Tinto and the British Anglo American.

The expansion in the size and number of ports along Brazil’s coastline will also be hampered by the drop in activity in the mining industry, as well as by the oil crisis caused by the drop in prices and especially the scandal that has hit the state-run oil company, Petrobras.

The drastic cutback in Petrobras’ investments has hurt the government’s strategy to develop a strong shipbuilding industry based on dozens of shipyards along the Brazilian coastline producing boats, offshore platforms and other oil exploration and drilling equipment for deepwater oil industry operations. 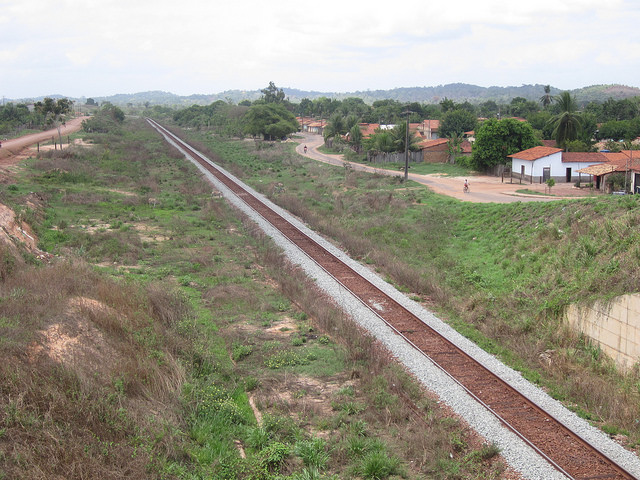 The Carajás railroad, which links the region where large new iron deposits belonging to Vale were found, with the port of Ponta Madeira in the Northeast city of São Luis, as it passes by a small town in the state of Maranhão. The railway network is going to be expanded and upgraded as part of a project that has not been hurt by the current crisis. Credit: Mario Osava/IPS

The crisis triggered the dismissal of tens of thousands of workers and the suspension of work in many shipyards and their port areas. One company alone, Enseada, hired to produce six drillships for Petrobras by 2020 for a cost of 4.8 billion dollars, has laid off nearly all of its 7,000 workers since 2014.

The company’s plant is only 82 percent complete. This and other white elephants represent an enormous waste of resources, which are not likely to be recovered.

“The programme was built on unrealistic foundations; the crisis has penalised investments that were misguided or badly designed,” said Adriano Pires, an economist who specialises in energy planning and is the director of the Brazilian Infrastructure Centre, a consultancy.

Most of the oil discovered in Brazil lies deep below the seabed off the Atlantic coast. The enthusiasm for creating a national industry for oil drilling equipment emerged after the 2006 discovery of large amounts of oil under a thick layer of salt, known as the pre-salt layer, more than 5,000 metres below the surface.

The difficulties of tapping into that newfound wealth make technology, ships, and large, complex equipment necessary. The administration of Luiz Inácio Lula da Silva (2003-2010) launched a strategy to develop the pre-salt reserves, in which Petrobras played a dominant role.

“It was an illusion. Reserving market encouraged waste not efficiency, besides favouring corruption,” Pires told IPS.

“Recovery will be slow and difficult; everything will have to be revised, and it will require a government with credibility, unlike the current one,” said the expert, an outspoken opponent of the centre-left government of President Dilma Rousseff, in power since Jan. 1, 2011. “It will require a regulatory framework that offers legal security, to attract investment.”

Oil and infrastructure are the sectors that can fuel recovery of economic growth, to overcome the recession that has hit Brazil since last year, he said.

Among analysts there are even doubts about the economic feasibility of exploiting the pre-salt oil reserves at the current prices, which stand below 50 dollars a barrel. “That is not evaluated on the basis of today’s prices, but looking at long-term prices, and I estimate that prices will go back up to 60 or 70 dollars a barrel within five years,” Pires said.

By contrast with the oil, mining and railway industries, the power industry has escaped the wave of frustrated infrastructure projects.

“In Brazil there is repressed demand, and that requires an expansion of the power grid in the long term – a need that doesn’t disappear because of recession or two years of economic slowdown. At the most, some goals could be postponed,” said André Lucena a professor of planning at the Federal University of Rio de Janeiro.

In this country of 202 million people, “per capita consumption of electricity is low in comparison to developed countries, which is why it tends to grow, for example with the incorporation of new electric and electronic equipment in homes,” he told IPS. For that reason, new hydroelectric and thermal plants will never be useless.

On a daily basis there are “consumption peaks” that the system must deal with to avoid blackouts. The generation and distribution of electricity cannot be based on average usage.

In Brazil, hydropower plays a predominant role – it is inexpensive and operates as long as there is water. It represents nearly two-third of the country’s installed capacity.

Thermal plants, fired by oil, natural gas or coal, produce more expensive electricity, and are only used when there is not enough hydropower. “They are built to be idle most of the time, but they’re not useless,” said Lucena.