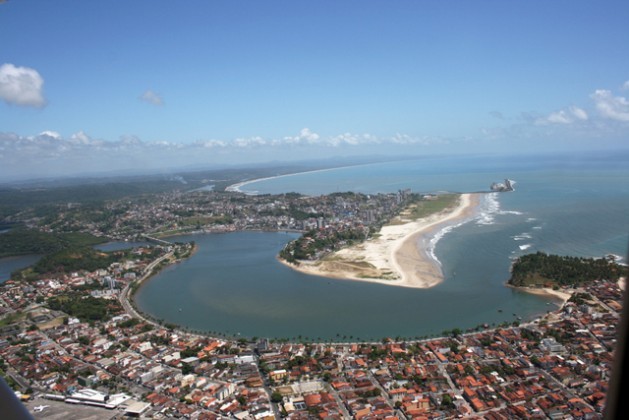 The town of Ilhéus in the Northeast Brazilian state of Bahia, part of whose coastline will be modified by the construction of the Porto Sul port complex, which environmentalists and local residents are protesting because of the serious ecological and social damage it will cause. Credit: Courtesy Instituto Nossa Ilhéus

RIO DE JANEIRO, Apr 24 2015 (IPS) - Activists and local residents have brought legal action aimed at blocking the construction of a nearly 50 sq km port terminal in the Northeast Brazilian state of Bahia because of the huge environmental and social impacts it will have.

The biggest project of its kind in Brazil has given rise to several court battles. With a budget of 2.2 billion dollars, Porto Sul will be built in Aratiguá, on the outskirts of the city of Ilhéus, at the heart of the Cocoa Coast’s long stretches of heavenly beaches, where the locals have traditionally depended on tourism and the production of cocoa for a living.

The courts have ordered four precautionary measures against the project, while civil society movements say they will not stop fighting the projected mega-port with legal action and protests.

The Porto Sul port complex will be financed by the Brazilian government, through its growth acceleration programme, which focuses largely on the construction of infrastructure.

Construction of the deepwater port and the complex will employ 2,500 people at its peak. But the project is staunchly opposed by locals and by social organisations because of what activists have described as the “unprecedented” environmental impact it will have.

Critics of the project have dubbed it the “Belo Monte of Bahia” – a reference to the huge hydroelectric dam being built on the Xingú river in the northern Amazon jungle state of Pará, which will be the third-largest in the world in terms of generation capacity.

Environmentalists protest that the new port terminal and its logistical and industrial zone will hurt an ecological corridor that connects two natural protected areas.

These are the 93-sq-km Sierra de Conduru State Park, which boasts enormous biodiversity in flora and fauna, and the 4.4-sq-km Boa Esperança Municipal Park in the urban area of Ilhéus, which is a refuge for rare species and a freshwater sanctuary.

Construction of the port complex “shows a lack of respect for the region’s natural vocation, which is tourism and conservation. Since 2008 we have been fighting to show that the project is not viable,” activist Maria Mendonça, president of the Nossa Ilhéus Institute, dedicated to social monitoring of public policies, told IPS.

Ilhéus, a city of 180,000 people, has the longest coastline in the state, and is famous as the scenario for several novels by renowned Bahia writer Jorge Amado, such as “Gabriela, Clove and Cinnamon”. 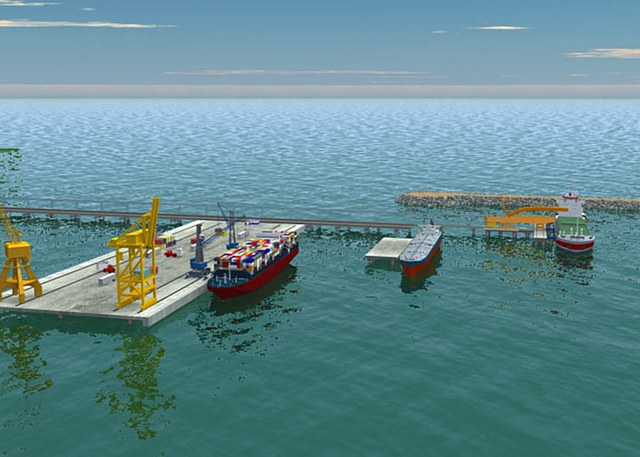 Digital view of a small part of the future Porto Sul port complex in Aratiguá, in the Northeast Brazilian city of Ilhéus. Credit: Bahia state government

The project’s environmental impact study, carried out in 2013, identified 36 potential environmental impacts, 42 percent of which could not be mitigated. Some of them will affect marine species that will be driven away by the construction work, including dolphins and whales. The project will also kill fauna living on the ocean floor.

Aratiguá, the epicentre of the Porto Sul port, “is an important fishing location in the region, where more than 10,000 people who depend on small-scale fishing along a 10-km stretch of the shoreline clean their catch,” Mendonça said.

An estimated 100 million tons of earth will be moved in this ecologically fragile region, where environmentalists are sounding the alarm while authorities and the company promise economic development and jobs, in a socioeconomically depressed area.

Bahia Mineração (Bamin) reported that until Porto Sul is operative, the Caetité mine will continue to produce a limited output of one million tons a year of iron ore.

According to Bamin, “the company will contribute to the social and economic development of Bahia and its population.” It says the Projeto Pedra de Ferro project will create 6,600 jobs and estimates the company’s total investment at three billion dollars in the mine and its terminal in the port complex.

Officials in the state of Bahia, which controls the Porto Sul project, reported that Brazil’s environmental authority held 10 public hearings to discuss the port complex, and said that 17 sq km of the complex will be dedicated to conservation.

A communiqué by the Bahia state government stated that all of the families to be affected by the works are included in a programme of expropriation and resettlement. Indemnification payments began in the first quarter of this year.

Social and environmental activist Ismail Abéde is one of 800 people living in the Vila Juerana coastal community, who will be displaced by the port complex project.

“The erosion will stretch 10 km to the north of the port, where we live, and the sea will penetrate up to 100 metres inland. It will be a catastrophe,” Abéde complained to IPS.

He pointed out that the complex was originally to form part of the Projeto Pedra de Ferro project.

That project, operated by Bahia Mineração (Bamin), a national company owned by Eurasian Natural Resources Corporation (ENRC) and Zamin Ferrous, is to extract an estimated 20 million tons of iron ore a year in Caetité, a city of 46,000 people in the interior of the state.

The iron ore will be transported on a new 400-km Caetité-Ilhéus railway, built mainly to carry the mineral to Bamin’s own shipping terminal in Porto Sul.

The mining project was granted an environmental permit in November 2012 and an operating license in June 2014.

Meanwhile, the Porto Sul complex received a building permit on Sep. 19, 2014, and construction is to begin within a year of that date at the latest. The complex is to be up and running by the end of 2019.

Porto Sul, the biggest port being built in Northeast Brazil and one of the largest logistical structures, will be the country’s third-largest port,l moving 60 million tons in its first 10 years of activity.

The main connection with the complex will be by rail. But an international airport is also to be built in its area of influence, as well as new roads and a gas pipeline.

The interconnected Projeto Pedra de Ferro requires a 1.5 billion dollar investment, and the mine’s productive potential is 398 million tons, which would mean a useful life of 20 years.

“The mine is not sustainable and the railway to carry the mineral to the port runs through protected areas and local communities,” Mendonça complained.

Activists argue that iron ore dust, a toxic pollutant, will be spread through the region while it is transported, affecting cocoa crops and the rivers crossed by the railroad.

Abedé also protested the way the company has informed the families that will be affected by either of the two projects. He said neither the company nor the authorities have offered consultation or dialogue.

“The state can expropriate property when it is for the collective good, not for a private international company,” he said.

The Eurasian Natural Resources Corporation (ENRC), a United Kingdom-based multinational, was delisted from the London Stock Exchange in November 2013, accused of fraud and corruption.

“We are preparing reports that we will present to public banks to keep them from financing the projects,” said Abedé, referring to one of the measures the activists plan to take to fight the project, along with court action.