Tunisia Digs a 100-Mile Moat to Keep Refugees at Bay 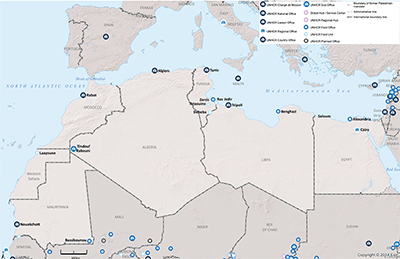 TUNIS, Sep 15 2015 (IPS) - Once surrounding castles of old, a moat stretching 100 miles is being dug by Tunisia against alleged terror threats from nearby Libya. Reporters are kept at bay from the digging in what officials have dubbed “a closed military area.”

Saltwater will fill the massive trench to be topped with sand dunes. Alligators are not mentioned in the moat’s prospectus.

“Why erect this wall when one was brought down between the two Germanies?” asked Salim Grira Mzioui, a local council representative of Wazen, a Libyan village along the border in an interview with the French newspaper Le Monde. “This will pose insurmountable problems. There are farmers cultivating land on both sides. There are also camel herds coming and going.”

The wall will put an end to ancestral traditions of border communities that have long ignored the state line artificially dividing entire tribes, he said. “We’re going to divide a people,” Adel Arjoun, a Tunisian hotel owner from Medenine, told Le Monde.

According to Tunisian officials, incursions by terrorists who target tourists prompted the decision to dig the barrier. Last June, for example, 38 foreign tourists were killed by a Tunisian said to be trained at a Libyan camp. Earlier, two attackers killed 21 foreign visitors at the Bardo Museum in Tunis.

But the small number of attacks suggests that Tunisia may be joining the anti-immigrant fever that has gripped some northern European countries.

And as the walls go up, the number of lives lost among desperate refugees is growing. Last month over 500 people leaving Libya were tossed into the seas when their vessels capsized.

Tunisia’s moat is only one of several misguided solutions to the swelling number of refugees fleeing war and extreme poverty. Hungary, Bulgaria and Greece are building walls. Ukraine plans to seal its 1200 mile border with Russia, and Estonia has a 70 mile wall in the works against the former Soviet Union.

Meanwhile, hundreds of Tunisians turned out last weekend to march against a draft bill for amnesty to those accused of corruption.

The draft bill is the centerpiece of the new government, which seeks to boost the economy by clearing away cases against businessmen and civil servants charged with corruption crimes.

Opponents of the law, however, call it as an attempt to whitewash the misdeeds of the old regime and ignore an ongoing process of transitional justice through the Truth and Dignity committee.

“We’re against the draft law because it is unfair and unconstitutional,” Sami Tahri, an official with the Union for Tunisian Workers, said at the protest. “It doesn’t fight corruption, it encourages it.”