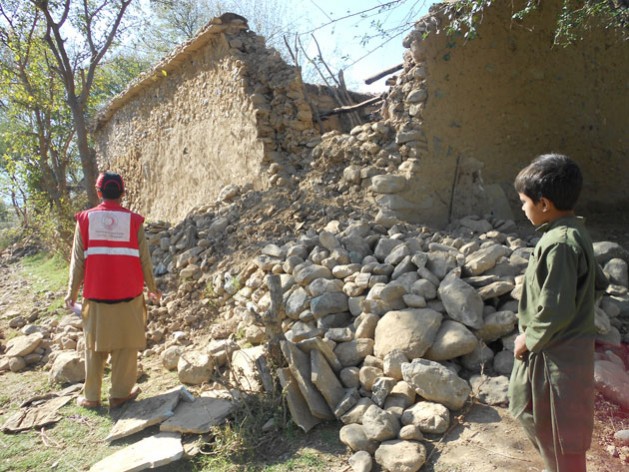 PESHAWAR, Pakistan, Nov 9 2015 (IPS) - Jauhar Shah lost everything. His house came tumbling down while his family was sleeping. He survived but his wife and daughter did not. The October 26 tremor measuring 8.1 Richter scale changed his life forever.

“We underwent immense hardships because our home was damaged completely. But then, government and the local people came to our rescue and rebuilt our mud-house temporarily,” Shah, 45, told IPS.

Shah, a resident of Shangla district in Khyber Pakhtunkhwa (KP), said he had received 6,000 dollars compensation for his damaged house.

In some areas, people received immediate help as dignitaries visited hard hit areas, he said. Shangla, of the KP’s 26 districts, is an example. Prime Minister Nawaz Sharif rushed to this worst-affected area and gave 5000 dollars for every dead person and 1000 dollars to those who were wounded.

Forty nine others in Shangia died. The total reached 226 in KP, one of the Pakistan’s four provinces but the quick rescue efforts by the central and provincial government helped to avoid complete disaster.

“Now, we are able to start reconstruction of our houses and pay loans we have taken for the burial of our dead,” Mumtaz Shah, told IPS.

It was like doomsday as everything before was swinging, he said. “For a moment I thought that Day of Judgment has happened as the people were heard reciting the verses from the holy Quran loudly in an effort to seek apologies for their sins from Al-Mighty Allah,” he said.

People in worst-stricken areas who were lucky enough received rapid medical and food aid when ministers and dignitaries visited the quake areas.

Maj-Gen Asghar Nawaz chairman National Disaster Management Authority (NDMA) said that 1632 person sustained injuries and 495 schools were damaged in the earthquake with its epicenter in Hindu Kush. “We established three relief camps and 27 distributions from where affected people are getting foodstuff,” he said.

But the situation in Chitral district near the Afghan border is far from recovery. “We aren’t getting relief goods because of a blockade of roads and land slides,” Abdul Akbar Chitral, a local politician said. In Chitral 15,937 houses were destroyed and 32 people were killed in the earthquake. Enough assitance is not reaching those in need.

“Chitral is home to natural calamity as in July 25 people died in flash flood which require more assistance,” he said.

KP Chief Minister Pervez Khattak visited Chitral after the earthquake and issued compensation money to the relatives of 32 people killed while compensation for the damaged houses, the most in the province, has yet to be paid out.

Pakistan had an earthquake of 7.6 magnitude that left 90,000 dead and 3million homeless in 2005, mostly in Hazara division of KP province. The government still hasn’t reconstructed half of the homes destroyed.

“We would extend all sort of help to the quake-harmed people and will not leave the victims alone in these trying times,” celebrated cricketer-turned politician Imran Khan told a news conference a day after the tremor in Peshawar, the capital of the Khyber Pakhtunkhwa.

Khan’s Pakistan Tehreek Insaf Party rules the Khyber Pakhtunkhwa province. He said 50 million dollars had been released to compensate the people the soonest.

World Health Organisation’s Dr Saeed Akbar Khan told IPS that the healthcare situation was under control. “We have provided trauma and diarrheal kits to the government to provide treatment to wounded people,” he said.

The World Health Organization, in collaboration with the Pakistan government, is carrying out rapid assessment on damaged health facilities to devise a re-construction programme, he said.

Affected populations in many far off areas still complain of shortagse of food, clean drinking water and medicines and were exposed to looting, which occurs after calamities.

“People have developed gastroenteritis. They are exposed to food-borne diseases and children and pregnant women risk malnourishment,” said Dr Abdul Jabbar, a government doctor in a remote hamlet in Chitral.

At least 20 people, who were critically injured when hit by falling boulders and rocks, were taken to Islamabad, capital of Pakistan, for treatment.

People desperately required water-purification tablets to prevent disease, he said. “In some areas, temperatures are below 0 degrees centigrade and elderly people and children face chest problems,” he said. “We have been receiving severely under-nourished children who also suffered from flu and scabies,” he said.

Jamaat Islami, a religio-political party, has called the government incompetent for not providing prompt services. “The compensation is too little to make for the losses of the displaced people,” Sirajul Haq JI’s chief said.

Haq, who belongs to Dir district, where 26 people died and 2397 houses were damaged, said people are unable to sleep as they have no proper shelter.