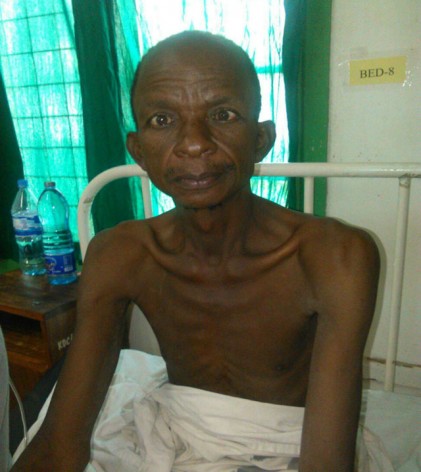 Joseph Barule, 44, one of the miners who were rescued after spending more than a month trapped in a mine pit at Nyukalata Gold mine in Kahama District in Shinyanga Region, Tanzania. Credit Kizito Makoye/IPS

DAR ES SALAAM, Tanzania, Nov 25 2015 (IPS) - The five artisanal miners who narrowly escaped death last week after a 41-day ordeal in a collapsed gold mine in northern Tanzania called their experience a living hell. They went through a myriad of emotions soon after having been freed.

“It was God’s miracle, I can’t really imagine how we would make it alive without his grace,” said Chacha Wambura,40.

Gaunt and visibly dehydrated, the miners said when the mine fell in they did not give up hope but instead they spend days ploughing through the rubble as they desperately fought for their lives.

“We tried hard to search for the way out using our helmet lamp and mobile phones but without any success,” Wambura told IPS from his hospital bed.

Six miners went missing on October 5 when a pit collapsed as they were crushing gold-bearing stones at the Nyangarata gold mine, Kahama district, in Tanzania’s northern Shinyanga region. About 20 miners were working underground at the time but only 14 manage to escape, police said. One of those trapped died during the ordeal.

Artisanal mining refers to activities done by workers who are not employed by a mining company, often using poor equipment and low technology. There are more than 680,000 artisanal miners in Tanzania according to Tanzania Chamber of Minerals. Compared with the country’s large-scale mining, analysts say the sector is smaller in terms of the value of its output but it employs a huge number of people.

Artisanal mining involves division of labour including primary license holders who are responsible for mining activities legally conducted on their claim, pit holders who get necessary inputs and diggers who crush gold bearing rocks.

The diggers often work in shifts of up to 24 hours in deep and unstable pits while crushing and moving heavy bags of gold ore risking injury from pit collapses.

Tanzania is rich in diamonds, emeralds, rubies and sapphires and is Africa’s third-largest gold producer. The mining sector has boomed with economic liberalisation policies applied in the mid-1980s.

Narrating his ordeal in his hospital bed, Wambura said they were constantly battling starvation and hopelessness but in the end it was their survival instinct and their “faith in God” that helped them hang on rather than giving up.

“I would hear some people working on the surface but whenever I shouted no one heard me,” he said. But as the miners wandered desperately in a network of tunnels there was a glimmer of hope at last.

“We saw a tiny crack on the rock where sun’s rays shone through the darkness,” Wambura said.

Having spent days without food, the miners had no option than to chew on the bark from poles used to support tunnels, and hunt out insects and try to collect water seeping through rock cracks in their helmets.

“I was eating roots, cockroaches, earthworms and anything that I thought would help me to survive,” he told IPS.

According to the miners, one of them called Musa Supana refused to eat roots and insects so he became seriously ill and starved to death.

“I encouraged him to eat insects but he declined, he then developed serious diarrhoea which I believe was responsible for his death,” Wambura said.

Initially the government called off rescue operations on October 12 on the grounds that the miners were presumed dead and retrieving their bodies from the rubble would be a mammoth task.

“Our efforts to rescue them initially failed due to the distance in which they were trapped in that’s why we suspended the operation,” said Justus Kamugisha, Shinyanga Regional Police Commander taking part in the rescue operation.

But in a dramatic turn of events, there was renewed hope on Sunday when the miners heard the sound of colleagues who were unwittingly cracking jokes as they crush gold-bearing stones close to the area they were trapped in.

“We were very weak, but I encouraged others to raise their voice until someone heard us,” said Wambura.

“Someone shouted back, who the hell are you? We identified ourselves and told him what happened to use, he told us to wait as he rushed to call the others who came to our rescue,” Wambura recounted.

Joseph Burule,44, another survivor who was visibly unconscious at the time they were rescued said they started lose hope during the first week as their cell phone and torch batteries went dead.

“We had extra set of batteries but they were all drained, we were engulfed in total darkness,” Burule said.

According to Barule, the most traumatic experience was when one of their colleagues died.

“I was completely devastated by his death, I knew we were all going to die, it is through God’s grace I am alive today,” he said.

Barule, who was a staunch supporter of the opposition presidential candidate, Edward Lowassa, before the accident happened, woke up to yet another grim reality that his favourite candidate did not win in the October 28 polls.

Msafiri Gerald, 38, another survivor who had lost his vision due to the darkness, said his health is steadily improving and he can now recognise visitors. “I had lost my natural ability to see, I knew I was going to be blind forever, but thank God my vision has been restored,” he said.

“On the first day we decided to put them on intravenous drip due to the contraction of the oesophagus, but we have slowly started to give them soft liquids, we expect their full recovery within a week,” Joseph Ngowi a doctor in-charge, told IPS.