KUALA LUMPUR, Nov 2 2015 (IPS) - (IPS Asia-Pacific) – Although it is six years old, few know what the ASEAN Intergovernmental Commission on Human Rights (AICHR) does. It has been called toothless, though its creation was seen as a step forward given the principle of non-interference in the 10-member Association of Southeast Asian Nations (ASEAN). 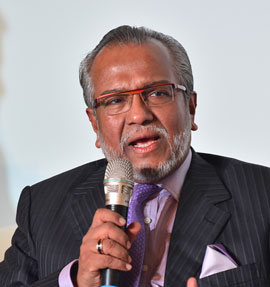 Q: Who are the individuals, groups, organisations or member countries that have approached AICHR to say they needed help for human right violations?

Dr Abdullah: There has been a sizeable number of persons and groups who came forward. But sadly, we are not authorised to receive their complaints and process them so they can go to the next level.

Q: So how did you address the complaints, given your situation?

Dr Abdullah: We asked them to go back to their countries or whoever can help them such as individual lawyers, legal institutions, human rights organisations and advocacy groups. We gave them directions on how to do that, doing all we can to help them find some answers and, we hoped, some form of restitution. But we cannot even interfere. That’s why we feel very inadequate. We are not independent enough. We need to look at our group and see how we can be a better body.

Q: How did these complainants approach you and what were their complaints?

Dr Abdullah: Many of them came to us with papers and documents, but there were more of them who contacted us through emails. Their complaints on human rights violations are very diverse – land rights violations due to seizure and incursion by more powerful people such as politicians and big business. There were those who raised their right to health and a healthy environment because of pollution caused by industries, oil and mine spills, poisoning and others. There were complaints about employment and labour practices, aggression and abuse inflicted by members of their own communities and other parties. But the majority of grievances involve violations of the fundamental rights to freedoms of speech, association and expression.

Q: In the ASEAN Responsible Business Forum (Oct. 27-29, 2015, Kuala Lumpur), you mentioned that you were surprised that ASEAN member states agreed on the ASEAN Human Rights Declaration (in 2012). What made you say that?

Dr Abdullah: Yes, I was pleasantly surprised because the 10 countries had their strong suspicions against each other for some reasons. But with this wariness, they still managed to agree that there should be an accord to guide them in human rights issues. But surprised as I was, I tried to understand this decision-making in the context of harmony even in differences in norms and beliefs.

Q: The current issue of the transboundary haze was high in the forum, and you were vocal about the responsibility of companies and industries operating in the region.

Dr Abdullah: Yes, I would say Indonesia should not be blamed for it, or any other country in the region for that matter. It doesn’t even matter which country is responsible, but all the countries should go after the companies causing the haze. They must file complaints against them and make them pay for it. I know countries need to maintain a level of diplomacy on matters like this, and the corporate sector is doing its own PR exercise, but I think each country must enforce its own laws to prevent this thing from happening again. The haze is a health and environmental issue that goes into the centre of human rights. It is a total breach of human rights. And I think the corporate sector should take this issue seriously. Thailand and Singapore have strong securities (guarantees), some sort of entry point for companies wanting to do business to comply with human rights stipulations. This should be a great start.

Q: You also praised Myanmar for initiating efforts to protect the environment.

Dr Abdullah: Myanmar co-organised a workshop on the implementation of human rights obligations relating to the environment and climate change to follow up from a similar workshop in 2014. The workshop enabled member states to understand deeper the human rights obligations relating to the environment in the ASEAN context. I would say it helped the countries look at ways of doing a regional response and charting country obligations involving the business and corporate sectors and other stakeholders, especially in environmental policy-making and protection. There were legal frameworks and environmental impact assessment tools for ASEAN.

Q: What are your next steps?

Dr Abdullah: The AICHR will ascertain that environmental issues that impact on human rights, such as the haze, will be included in discussions in the ASEAN Summit. On complaints that we continue to receive, we will make sure that they are received by the countries in question at the national level, and through specific channels. We will continue to promote human rights. We want to make sure they are in the consciousness of people in the region.

*This is part of the ‘Reporting ASEAN: 2015 and Beyond’ series of IPS Asia-Pacific and Probe Media Foundation Inc. http:www.aseannews.net