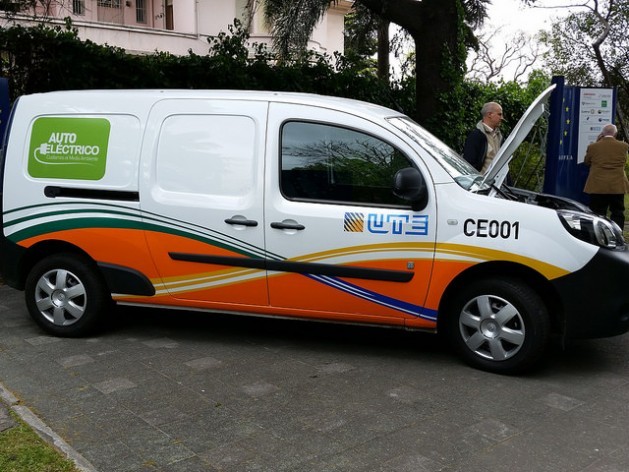 Since July 2014, Uruguay’s state power utility, UTE, has 30 100 percent electric vans. After the success of this initiative, it doubled that number in its fleet of vehicles, and incorporated two electric cars, in November 2015. Credit: Verónica Firme/IPS

MONTEVIDEO, Nov 17 2015 (IPS) - Uruguay is modifying its energy mix with the aim of achieving carbon neutrality by 2030, by means of a strategy that bolsters non-conventional clean energy sources through public-private partnerships and new investment. A majority of this South American country’s energy already comes from renewable sources.

“By the end of 2014, this country’s energy mix was made up of 55 percent renewable sources, compared to a global average of just 12 percent,” said Ramón Méndez, the president of the National Climate Change Response System, during a meeting on renewable energy.

Furthermore, 94 percent of electric power comes from renewables, he said, in a country which is only responsible for 0.06 percent of all greenhouse gas emissions, which cause global warming.

The transformation of Uruguay’s energy mix began during the first term (2005-2010) of the current president, Tabaré Vázquez, although the country was not starting from zero in terms of renewable sources, Gonzalo Abal a physicist with the Solar Energy Laboratory of the University of the Republic of Uruguay, said in an interview with IPS.

Thanks to hydropower, a significant proportion of Uruguay’s energy already came from renewables. But hydroelectricity is vulnerable to the effects of climate change.

Traditionally, the country depended on four old hydroelectric dams, three of which were built on the Negro River between the 1930s and the 1970s. The fourth is on the Uruguay River, shared with neighbouring Argentina, and was built in the 1970s.

In addition, two ancient thermal plants powered by fuel oil have served as a back-up when the hydropower supply drops or collapses due to water shortages. The last time this happened was in 2004.

This Southern Cone country of 3.3 million people has fully exploited its large hydropower sources, and began to turn towards wind power and later biomass, the two clean energies around which the greatest progress has been made, according to data provided by the experts and documents consulted by IPS.

The transformation of the energy mix required a legal framework, which included authorisation for clients connected to the low voltage grid to generate electric power from renewable sources – wind, solar, biomass or mini-dams – with a potential of no more than 150 kilowatts.

The Energy Efficiency Plan is aimed at reducing energy consumption in all industries and sectors of the economy, but especially in residential areas and transportation, which will be responsible for 75 percent of the total accumulated reduction by 2024.

In addition, the Investment Promotion Law was modified to offer tax breaks so that at least five percent of the investment in any given project goes towards renewable energy, for the goal of cleaner production. 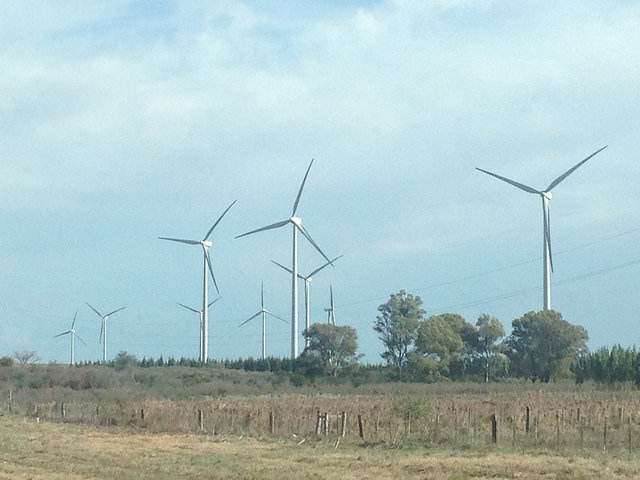 Uruguay has 16 medium-sized and large wind farms, like this one in the northern department of Tacuarembó. The country already has 670 MW in installed wind power capacity and a similar amount under construction, which means that 30 percent of demand for electric power will be covered by wind energy by late 2016. Credit: Ana Libisch/IPS

The state power utility, UTE, is responsible for the generation, transmission, distribution and sale of electricity to the 1.2 million clients distributed throughout Uruguay’s 176,215 square kilometres of territory.

UTE has a monopoly over energy distribution but not generation, which the private sector is also involved in, which made it difficult to include power generation in the government’s energy strategy goals.

As of late 2014, Uruguay had a total installed capacity of 3,719 MW, including generators connected to the national power grid as well as stand-alone power systems, according to the Ministry of Industry, Energy and Mining.

The supply consisted of 1,696 MW of thermal energy (from fossil fuels and biomass), 1,538 MW of hydropower, 481 MW of wind power and four MW of solar power, says the National Energy Balance 2014 report.

In the economy, there was a structural shift in the energy consumption mix since 2008, which has remained unchanged for the past seven years. Industry is the biggest consumer (39 percent), followed by transportation (29 percent), residential (19 percent), commerce and services (eight percent), and lastly agriculture, fishing and mining (five percent).

From 2007 to 2014, industry overcame transportation, which was pushed to second place, driving up biomass consumption. Pulp mills played a decisive role in that, because thanks to biomass they became 90 percent self-sufficient in energy, as part of the transformation that began in 2005.

In this country, “the important change came in regard to wind power – that is where changes became necessary and challenges were addressed,” Gerardo Honty, an expert with the Latin American Centre for Social Ecology, told IPS.

Wind energy is in full expansion, “and we are nearing one gigawatt (1,000 MW) of installed capacity,” said Abal.

With respect to solar energy, “we have a 50-watt plant already in operation – that’s 100 hectares of solar panels – and a second 50-MW plant has begun to be built, with investment from Europe,” said the academic.

“The rest of the plants, around 15, are smaller, between one and five MW, and are distributed throughout the north of the country,” Abal added.

Connecting with the neighbours

Uruguay is diversifying its energy sources, but it can also “expand the grid in geographic terms; if you interconnect with Argentina and southern Brazil, the probability of having an atmospheric event that leaves you without wind power in the entire area of the pampas is very low,” said the physicist.

The national power grid has interconnections with Argentina (2,000 MW) and with Brazil (70 MW, currently being expanded to 500 MW). The latter has been delayed because the two countries’ power grids operate on different frequencies, and conversion capacity must be added to overcome the problem.

In Uruguay, “the problem isn’t the electric power industry but combustion engines that cannot run on the renewable sources mentioned,” said Honty.

The Montevideo city government is studying the possibility of purchasing autonomous electric vehicles for the sake of energy efficiency and because they do not emit greenhouse gases while at the same time they reduce noise pollution, economist Gonzalo Márquez with the department of mobility said in a forum on energy.

But no timetable has been outlined yet, he told IPS, because there are difficulties to work out like the cost and maintenance of the vehicles, the driving range of the batteries, and the subsidy for public transport, “a hidden cost that society assumes.”

Uruguay projects that when the transformation of its energy industry is complete, greenhouse gas emissions will be 20 to 40 times lower than the global average, said Méndez, the top official in the government’s climate change response office.

This country also aims to be carbon neutral by 2030. That means “our target for that year is for the CO2 (carbon dioxide) that we absorb to be greater than what our entire economy emits,” he said.