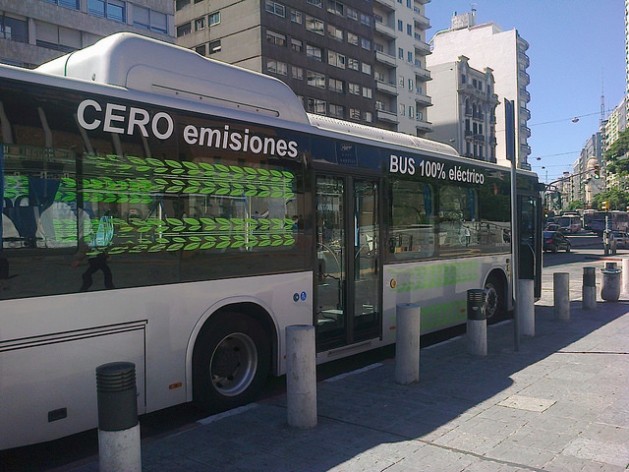 MONTEVIDEO, Mar 24 2014 (IPS) - Uruguay plans to gradually replace oil-based fuels with electric energy in its public transport system, and is currently assessing the costs and benefits of the shift.

Tests indicate that the running costs of electric buses can be six- to eight-fold lower than for diesel buses.

For the last two years, studies have been under way on the potential benefits of adding electric vehicles to the public transport fleet in Montevideo, where half the country’s 3.3 million people live.

In late 2013, performance and range trials were carried out on an E6 model car and a K9 model bus made by the Chinese company BYD. The results were presented on Mar. 13.

The economic analysis of the performance of the electric vehicles, carried out by the city government, was positive. But mechanisms must be designed to face the initial investment and redefine the scope of subsidies and taxes.

The overall economic advantage of an electric bus over one running on diesel is 1.7 to one, according to this study, which took into account costs of purchase, maintenance and operation of different types of vehicles under the present subsidies and taxes.

This year the first 50 electric taxis will ply the streets of the Uruguayan capital.

Taxi fleets in Bogotá and London are also incorporating electric vehicles, said Campal, and they are already in service in Hong Kong and the Chinese city of Shenzhen, where they are made.

But in Montevideo, it has not yet been defined how battery charging points for taxis and buses will operate, said Méndez.

Electric motors expend six times less energy than diesel motors. But there is a state subsidy of 65 percent on diesel fuel for buses, so unless the subsidy structure is changed, bus companies will not find it profitable to switch to electricity.

The initiative is part of Uruguay’s energy policy, which aims for half of the country’s energy mix to be made up of renewable sources by 2015, much of that wind energy.

The Electric Mobility Group, made up of several national bodies and the Montevideo city government, has worked since 2012 on the introduction of this technology, which has the advantage of zero greenhouse gas emissions.

The electric vehicles in question function with a bank of lithium iron phosphate batteries, which are biodegradable and do not include heavy metals. When fully charged, the cars and buses have ranges of 300 and 250 kilometres, respectively.

Charging them takes a 10-kilowatt power source, while Uruguayan homes are usually supplied with two to six kilowatts of power.

Electric vehicles cost up to five times more than those using conventional fuels in Uruguay. An electric bus costs 500,000 dollars and a car 60,000 dollars. But operating and maintenance costs are only 10 percent of those for diesel motors.

He also said the country would be able to absorb the additional energy consumption, as by 2015 it would become an exporter of electricity.

Since 2005, “Uruguay has installed as much new electricity generating capacity as it did in the previous 100 years of history of its energy industry,” Méndez said.

Transport consumes one-third of the country’s energy resources. “Over two billion dollars a year are spent on fuel,” he said. For this reason, measures taken “in this sector could mean hundreds of thousands of dollars a year in savings for the country,” Méndez said.

Electric vehicles “are the way ahead for the world in general and Uruguay in particular,” he said.

Transport is currently dependent on fossil fuels, but once electric vehicles are introduced it would be based on sources like wind energy, biomass and photovoltaic energy.

“That means lower costs and greater sovereignty,” stressed the head of the National Energy Directorate.

“Unless we strike oil in our country, instead of depending on what we have to import at high prices with complete uncertainty, we can guarantee our energy supply by installing more wind parks, and at the same time we can satisfy transport needs,” he said.

But further adjustments are also needed.

“If these funds were spent instead on, say, improving infrastructure for electric vehicles, which have lower operating costs, we would gain a technology with a great many environmental and other benefits,” he said.

In his view, the law should be changed “so that subsidies are applied in a balanced way to both systems.”

Transport Minister Enrique Pintado said “transport subsidies cannot be based on the contradiction that ‘the more you spend the more you are subsidised’; they should instead reward reductions in consumption.”

Bus fares “should come down not because of subsidies, but due to lower real prices. That means much more efficient management of bus companies and lower energy, parts and unit costs,” he said.

“We are laying the foundations for the next departmental (provincial) and national governments to be capable of bringing to fruition what we are launching today,” Pintado concluded at the presentation of the report on the evaluation of the electric vehicles.

Tax costs are another aspect that needs to be reviewed in order to promote electric transport.

Import duties on electric buses are 23 percent, compared to six percent for diesel buses. In addition, diesel buses are exempt from the domestic tax known as IMESI.

The Finance Ministry will be joining the Electric Mobility Group to contribute to decisions on tax benefits to promote the new technology.