PARIS, Dec 4 2015 (IPS) - On the first day of the 2015 Climate Conference, Nicaragua became the first country openly refusing to comply with the United Nations mandate to submit a climate pledge. 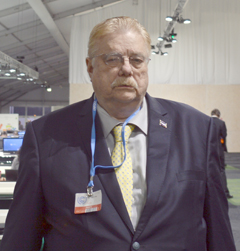 Paul Oquist, Nicaraguan Lead Envoy, told reporters the country will not submit their intended nationally determined contributions (INDC), a mechanism agreed in 2013 to build the next climate agreement from the bottom up. One hundred eighty-three countries out of the 195 parties to the Climate Convention have already submitted theirs.

Interviewed by IPS, Oquist said this process is doomed to fail since it missed the goal of 2 degrees of global temperature increase set by countries – although some like Nicaragua push for a 1.5 degree goal. Rather, the minister advocates dropping the INDC process and building an agreement based solely on historical emissions.

Reviews of the INDCs show their implementation would result in expected warming ranging from 2.7 to 3.5 degrees Celsius by 2100, an improvement after the expected 4.5 increase but still insufficient to hit the safe mark.

Oquist spoke with IPS in Paris:

IPS: As a region, Latin America and Central America have similar issues related to climate change, yet the countries move at different paces and groups. Has the region lost its chance to lead as a whole?

These nationally determined contributions (INDC) will not work. The first evidence is that on the first round they couldn’t get to the 1.5 – 2 degrees Celsius temperature increase goal, they came to 3 degrees. That’s serious business. Three degrees in the developing countries is 4 degrees. The INDCs will take us there.

There is a proposal on how to fix this, the proposal in the Paris Agreements, by doing another INDC exercise every five years. But in five years we’ll be further away from the 1.5 degree target than we are now. Nicaragua does not agree with an accord that will condemn the world to 3 degrees.

IPS: The first rounds of INDC, depending of the way you measure it, will get us to 2.7 to 3.5 degrees. It could improve in a second round as technologies get cheaper and overall ambition increases. Why drop it?

Twenty-five per cent are dependent on financing. There is no financing for those, and I would be very surprised to see the developed countries taking the hard policy decision on the model of production, consumption, finance and lifestyle that is necessary to bring us back to the 1.5 to 2 degree range.

These countries have profited from this: from cheap energy, from polluting the environment, for their development. So they can be held responsible for replacing the CO2 and trying to drive down the temperature rise. Also, historical responsibility can be applied to losses and damage through indemnification, which should go in a direct and unconditional form to the countries suffering from climate change.

IPS: When did Nicaragua take the decision that they wouldn’t submit the INDC and that the process was a failure as you have said?

So we know from the end of October that this was a failure. Nicaragua has decided a long time ago not to do the INDC because universal responsibility doesn’t work and it’s not the way to go.

The top three emitters release 49.49 per cent of emissions (that’s China, the United States and the EU) and the top 10 comes out to 72 per cent, while the bottom 100 countries represent 3 per cent. The only way to come back to the 1.5 – 2 is to draw out of the top 10 pool. The only way to do this is through large emitters who are also those who are historically responsible.

IPS: This would imply top 10 emitters like India, China, Brazil also have reduce their emissions significantly, more that they have pledged.

It would be everyone in that group. United States, Europe, those you mention, everyone. The question is not which countries, but how to solve this problem. This is a problem of humanity and Mother Earth and all of us. So are we serious about solving this or are we about making political games in here? This is not a negotiation over coffee or cocoa quotas; this is the Earth’s climate.

More than 180 countries are complying with the INDC process, including most of your partners in the Like Minded Developing Group. Are they wrong by trusting the process?

I would say the position we consider correct is the historical responsibility emissions and we hope more and more countries would realize that their INDC are going to fail.

Wonderful, then let’s make the changes when they occur, let’s not make the changes based on hypotheticals. Let’s work on the basis on facts, on the ground in 2015. That’s what we have to do.

You know, you ask about the question of the 180 countries. There was a time when France was isolated and under enormous pressure because there was a fever to go to war. France said no as it was a war of aggression that would lead to disastrous consequences.

Now we look back at that and the people who supported the Iraq War, some of them feel quite embarrassed about it and those who opposed it used it as political credentials that they are better at understanding a complex process and the French position looks very good. I would hate to think that the Paris Accord would be remembered in the future as the accord that condemned us to 3 – 4 degrees and the consequences of that.

I know Nicaragua, as any other country here, wants an agreement to come out of Paris. Is this a realistic way to get an agreement? Following INDCs, we went from 4.5 degrees before pledges to 2.7 degrees afterwards.

A process that misses its target by 100 per cent or 50 per cent is not a success. To try to say it’s a success because if could have been worse is kind of an “alegrón de burro” (a fool’s wish). We set the target. The developed countries set the 2 degree target, that wasn’t met by 100 per cent. We are in 3 degrees, so it’s not a success. If we go up to 3.5 degrees and 4 degrees and it floats upwards, then we will not be a success but an absolute disaster.

What if they take the current emissions of historically responsible countries and they don’t add up to solve this? Developing countries are currently emitting more than developed.

You’re in a different logic. Whoever is responsible should contribute to the reduction and to the indemnification. We can get objective figure based on science. Right now we have nothing. 2020? Who said climate change starts in 2020? Whoever said that $100 billion is the figure? It’s based on nothing. So let’s start working on the base of foreseeable goals.

Just one final thing: if this INDC process goes on, will Nicaragua block the negotiations?

We’re going to see what happens. We’ll hopeful that not a lot of countries would want to get back home and tell their farmers, their media and their politician: sorry, the best we can do in Paris was 3 degrees.