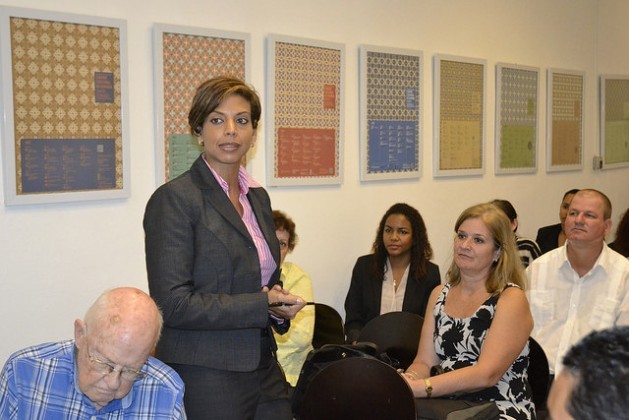 Dominican journalist Amelia Deschamps addressing a workshop in Santo Domingo on the role of reporters with regard to climate change. Researchers and journalists from Cuba, Haiti and the Dominican Republic took part in the event. Credit: Dionny Matos/IPS

SANTO DOMINGO, Jan 6 2016 (IPS) - Environmentally committed journalists in the Caribbean point to a major challenge for media workers: communicating and raising awareness about the crucial climate change agreement that emerged from the 21st Conference of the Parties (COP21) in Paris.

“Scientific information must be published in clearer language, and we must talk about the real impact of climate change on people’s lives,” journalist Amelia Deschamps, an anchorwoman on the El Día newcast of the Dominican channel Telesistema 11, told IPS.

She was referring to the communication challenges posed in the wake of COP21 to the United Nations Framework Convention on Climate Change, held Nov. 30 to Dec. 11 in Paris to produce the first universal agreement to cut greenhouse gas emissions and curb the negative impacts of global warming.

“So far good intentions abound, but there are few practical steps being taken in terms of mitigation and adaptation,” said Deschamps.

In the view of this journalist who specialises in environmental affairs, media coverage of global warming “has been very weak and oversimplified,” which she said has contributed to the public sense that it is a “merely scientific” issue that has little connection to people’s lives.

“People are more concerned about things that directly affect them,” said Deschamps, who is also an activist for risk management in poor communities, and considers citizen mobilisation key to curbing damage to the environment.

The 195 country parties to the U.N. Framework Convention on Climate Change meeting in the French capital adopted a binding universal agreement aimed at keeping a global temperature rise this century “well below 2 degrees Celsius” with respect to the pre-industrial era.

Scientists warn that the planet is heating up as a result of human activity, and this is causing extreme weather events such as heat waves, lengthy droughts and heavy rainfall. In addition, clean water, fertile land and biodiversity are all being reduced.

Coastal areas are already suffering the consequences of rising sea levels, a process that according to scientific sources began 20,000 years ago, but has been accelerated by global warming over the last 150 years.

Small island nations such as those of the Caribbean are among the most vulnerable to climate change, while their emissions have contributed very little to the phenomenon.

“As journalists and communicators we have not managed to identify the right messages to make the public feel involved in this issue,” said Deschamps at a workshop organised by the Cuban Environmental Protection Agency, the Dominican Chapter of the Nicolás Guillén Foundation, the Norwegian Embassy and the Inter Press Service (IPS) international news agency. 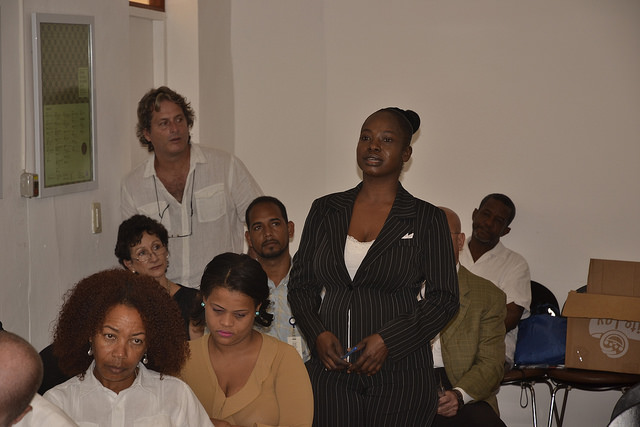 Marie Jeanne Moisse, a reporter and environmental educator who works in the climate change office in Haiti’s Environment Ministry, spoke during a workshop in Santo Domingo about the media’s role in reporting on and raising awareness about global warming. Credit: Dionny Matos/IPS

To train reporters from the Caribbean, a group of experts from Cuba, Mexico and the Dominican Republic offered a Nov. 23-26 course on “Social Communication for Risk Prevention, Gender and Climate Change” in the Dominican capital.

The course was attended by 41 journalists from Haiti and the Dominican Republic. It included three talks that experts gave to students from two rural schools and to a group of 25 Haitian-Dominican women.

“The media need to be trained to provide more information at a national level on the phenomenon and about the agreement reached at COP21,” said Marie Jeanne Moise, an official in the climate change office in Haiti’s Environment Ministry.

According to Moise, a communicator and educator on the environment, “there is alarming talk today about global warming, and people are scared. But that doesn’t mean they know about the phenomenon or about how to protect themselves, to reduce the impacts on their lives.”

Moise urged journalists and reporters to “go to the roots of the problem.”

“News coverage focuses on catastrophes and on how vulnerable we are. But little is said about what contribution the media should make to help bring about a positive change in attitude towards the environment.”

The Haitian official said COP21 “created greater unity among the Caribbean as a vulnerable region that needs to adopt a common position.”

The countries in the region that took part in COP21 are negotiating as part of the Caribbean Community (CARICOM), made up of 15 mainly island nations, and as part of the Alliance of Small Island States (AOSIS).

Ahead of COP21, CARICOM launched the “1.5 to Stay Alive” campaign to raise awareness on the effects of climate change, especially on small island states, while strengthening the region’s negotiating position.

Haiti and the Dominican Republic, which share the island of Hispaniola, are on the list of the 10 countries most vulnerable to natural disasters, according to the Climate Change and Environmental Risk Analytics report published in 2012 by Verisk Maplecroft, a global risk analytics and forecasting company based in Britain.

Besides physical and economic exposure to events like earthquakes and hurricanes, these countries are vulnerable due to social inequality, a lack of preparedness, and unequal distribution of local and regional capacities, said the study, which compared 197 countries using 29 indices and interactive maps analysing major natural hazards worldwide.

Dominican blogger and human rights activist Yesibon Reynoso said that in his country “quite a lot is known and talked about, with regard to the environment, because of the current circumstances.”

But, he said, “for example, deforestation is not always punished. Impunity reigns through exploitation with the support of corruption in the state.”

In his view, “environmental rights are not addressed in accordance with how essential they are to life, in the country and around the globe. There is no traditional social and political respect for the environment.”