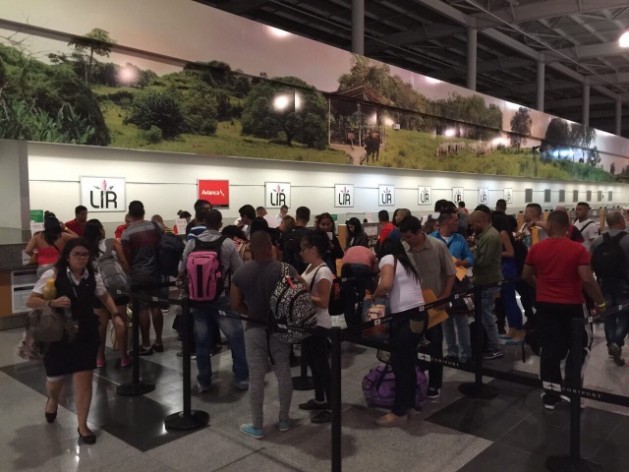 Some of the 180 Cuban immigrants who departed Jan. 12 from the Daniel Oduber aiport in northern Costa Rica, as they line up for the test flight, the start of a possible solution to the crisis that broke out in November 2014. Credit: Foreign Ministry of Costa Rica

Jan 13 2016 (IPS) - After a nearly two-month wait, a group of 180 Cuban migrants, of the roughly 8,000 stranded in Costa Rica in their attempt to reach the United States, continued on their way as a result of a complex logistical process that emerged from diplomatic negotiations involving several countries in the region.

The first pilot flight took off late Tuesday Jan. 12 from the Daniel Oduber airport in the northwest Costa Rican city of Liberia, headed for the capital of El Salvador. From there they continued by bus to Guatemala and on to the Mexican border.

“What the countries agreed to was a pilot flight….we are convinced that this will be successful, thanks to the meticulous efforts put into it,” said Costa Rica’s foreign minister, Manuel González.

The minister explained that officials from the countries in the region will meet again before Jan. 18 to evaluate the success of the first charter flight and decide whether to use the same system with the rest of the migrants trapped along the border between Costa Rica and Nicaragua since November.

The migrants clapped and cheered when the 180 passengers to take the first charter flight were called by megaphone in the shelter. When the group, wearing light clothing and carrying small suitcases, arrived at the airport, some of them carried U.S. flags while others wore t-shirts with the Costa Rican slogan “Pura vida” – literally “pure life” but meaning anything from “full of life” to “this is living!”

The International Organisation for Migration (IOM) helped with the logistics in order for a commercial airline to offer a charter flight, after a diplomatic effort involving Costa Rica, El Salvador, Guatemala, Honduras, Mexico and Panama.

González said IOM support was sought because the countries of Central America have little experience in this kind of operation.

Officially, 7,802 Cuban migrants are stuck in Costa Rica, some of them since Nov. 14. Their aim is to get to the United States to take advantage of the U.S. Cuban Adjustment Act’s “wet foot, dry foot” policy, which guarantees residency to any Cuban who sets foot on U.S. soil.

“I’m looking for the American dream,” said one of the travellers, Yumiley Díaz.

“I left a one-year-old baby behind in Cuba; I can’t wait to get to the United States and apply to bring him over,” said the young secretary, who is travelling with her husband to Tampa, Florida. “The United States offers me that possibility. Once I’m legal there, I can ask to bring him in.”

After receiving temporary transit permits from the Costa Rican government, the Cubans ran into resistance from Nicaragua, which closed its border and refused to let them through. 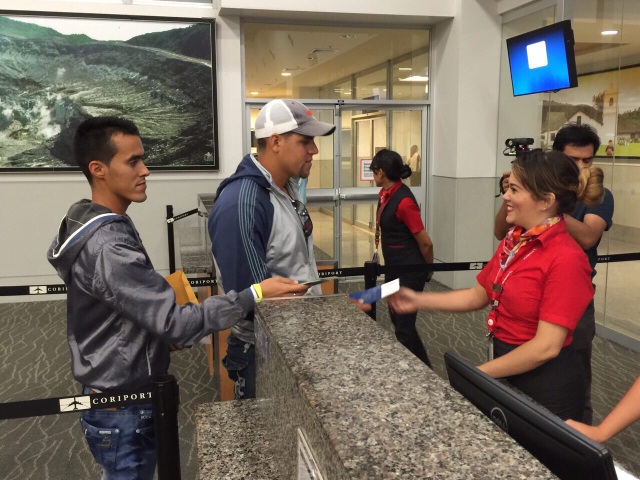 One of the 180 Cubans on the Jan. 12 charter flight which took the first group of migrants from Costa Rica to San Salvador. From there they are heading on to their final destination: the United States. Credit: Foreign Ministry of Costa Rica

The air bridge was set up so they could get around Nicaragua.

Most of the stranded Cubans are in northern Costa Rica, in shelters set up by the local authorities, who report that they are assisting 5,298 migrants. On Dec. 18, the country stopped issuing special visas allowing Cubans safe passage through the country, which is why some of the Cubans were not registered and cannot be located.

The migrants now have the possibility of continuing their northward journey by air, as part of a “forced solution,” said Carlos Cascante, director of the School of International Relations at the National University of Costa Rica.

The academic said the measures taken by the Nicaraguan government were aimed at “drawing attention away from” internal criticism and complications plaguing its plan to build a canal between the Pacific and Atlantic oceans, in a year when general elections are scheduled for November.

With regard to the negotiated solution, Costa Rica’s foreign minister said: “This isn’t just an airplane ticket; it’s a package that includes getting from the shelter to the border between Guatemala and Mexico.”

All of the countries along the way to the United States require visas for Cubans, which makes it impossible for them to take a commercial flight. Guatemala opened a special consular office to serve the migrants arriving from Liberia, Costa Rica.

The Cubans themselves paid the 555-dollar air fare, as well as the bus tickets, departure tax, meals, and health insurance, said the IOM chief of mission in Costa Rica, Roeland de Wilde.

Children under 13 will get a discount, although only adults were on the pilot flight.

“These Cubans who are in Costa Rica with their documents in order are economic migrants here voluntarily. They began this long journey by paying their own way and they will continue to do so,” said the IOM representative.

Once they make it to Mexico, the authorities there will adopt their own measures to facilitate the migrants’ passage north.

“Mexico will process their information, and will give them a note granting them 20 days to regularise their situation or to leave the country. That is enough time to get to the U.S. border,” said de Wilde.

This convoluted route to the United States begins with a flight from Cuba to Ecuador, which in late 2015 adopted stricter new visa requirements for Cubans, changing what had been an exceptional openness to citizens from the socialist Caribbean island nation who face an otherwise restrictive international context.

From Ecuador, Cubans make a journey of several thousand kilometres by land and sea to reach the southern U.S. border, often paying people trafficking rings, a phenomenon that kept their passage through Central America largely invisible.

But things changed when the authorities in Costa Rica dismantled one of these networks on Nov. 10, shedding light on the true dimensions of the flow of Cubans through Central America.

Despite the first test flight, a full solution is not yet in sight. More than 7,600 migrants still remain on Costa Rican soil, according to the visa registry in the country’s migration office.

Use of the so-called Ecuador route has stepped up because of worries that the “wet foot, dry foot” policy may be eliminated or restricted as a result of the thaw between Cuba and the United States, which began in December 2014 and has included the reestablishment of full diplomatic relations.

From October 2014 to Dec. 1, 2015, Ecuador allowed Cubans to enter the country without a special letter of invitation. But this requisite was put back in place after the migration crisis broke out along the border between Costa Rica and Nicaragua.