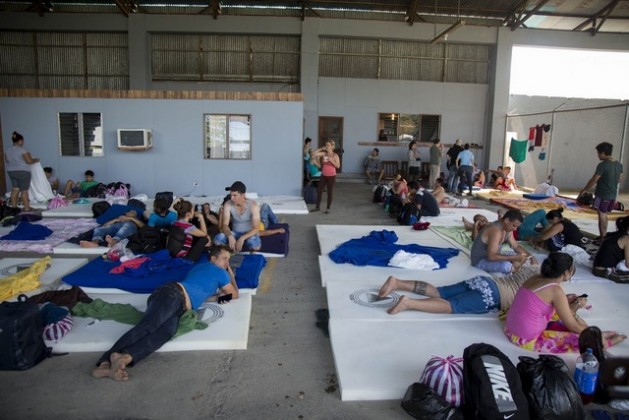 A group of Cubans wait in a shelter opened by the authorities in the town of La Cruz in the northwestern Costa Rican border province of Guanacaste. Credit: National Risk Prevention and Emergency Response Commission of Costa Rica

SAN JOSÉ, Nov 23 2015 (IPS) - Thousands of Cubans heading for the United States have been stranded at the Costa Rican-Nicaraguan border since mid-November, waiting for the authorities in Managua to authorise their passage north.Just over 2,500 Cubans are waiting in northern Costa Rica, the majority in temporary shelters opened by the local authorities. After receiving temporary transit permits from the Costa Rican government, the Cubans ran into resistance when they reached Nicaragua, which closed the border and denied them passage.

“We’re desperate to get to the United States because we want a better future for our children and for ourselves,” said Arley Alonso Ferrarez, a Cuban migrant, in a video provided by the Costa Rican government’s National Risk Prevention and Emergency Response Commission.

Alonso and the other Cubans stuck at the Nicaraguan border are seeking refuge under the U.S. Cuban Adjustment Act’s “wet foot, dry foot” policy, which guarantees residency to any Cuban who sets foot on U.S. soil.

The exodus was fuelled once again this year by the fear that the thaw between the Cuban and U.S. governments, which began in December 2014 and has led to the restoration of diplomatic ties, would result in the modification or elimination of the special treatment received by Cuban immigrants to the United States.

Cubans have been making their way to the United States through Central America for several years now, but the phenomenon had gone unnoticed until the Costa Rican government adopted measures in early November to fight the trafficking of persons through this country.

That cut short the flow of undocumented immigrants and revealed the scale of the movement of Cubans from Ecuador to the United States.

“The current crisis was triggered by the dismantling of the (trafficking) ring, which has brought to light the situation which we had already warned about, with regard to the increase in the number of Cuban migrants,” Costa Rican Foreign Minister Manuel González told IPS.

“I wouldn’t wish this on anyone, not even my worst enemy,” Cuban migrant Ignacio Valdés told the local newspaper La Nación, referring to the dangers faced along the lengthy journey. “We’ve been robbed, we were forced to jump into the sea between Colombia and Panama, some girls were even raped, and the police stole from us.”

After the Nov. 10 arrest of members of the trafficking ring which smuggled migrants through Costa Rican territory, Cubans began to be stranded in groups along the southern border of the country.

That forced the authorities to issue seven-day safe conducts, to regulate their passage to Nicaragua. But that country completely sealed its border on Nov. 15, and blocked the entrance of Cubans when it reopened the border the next day.

“The current crisis was triggered by the dismantling of the (trafficking) ring, which has brought to light the situation which we had already warned about, with regard to the increase in the number of Cuban migrants.” - Costa Rican Foreign Minister Manuel González

The migrants are awaiting the results of a meeting to be held Tuesday Nov. 24 in El Salvador, where the countries of Central America, as well as Mexico, Ecuador and Colombia, will try to hammer out a joint regional response.

The meeting will explore options to create a “humanitarian corridor” to facilitate the passage of Cubans to the United States – which has not been invited to the meeting, while Cuba has failed to confirm its participation, the Costa Rican Foreign Ministry reported.

In recent years, more and more Cubans have been going through Ecuador, which grants them three-month tourist visas and to which they arrive by plane. The route – by land and sea – is much less frequently used and less well-known than the Florida Straits.

It is 5,000 km as the crow flies between Ecuador and the U.S. border, but the routes used by the trafficking gangs are much longer.

In April 2014, the Ecuadorean government eliminated the requisite that Cubans applying for visas present a letter of invitation, thus allowing them to remain in the country for up to three months without any additional requirements.

Once they make it to the South American continent, the migrants go by land across the border between Ecuador and Colombia, before taking a boat along Colombia’s Pacific coast to Panama, where they are smuggled, once more by land, to the Costa Rican border.

“These people are brought in by the mafias, the international people trafficking networks; without a doubt they are risking their lives,” said the foreign minister. “We have received reports of women who have been raped, who have crossed through jungles, and of children who are put in danger. The conditions are deplorable.”

According to Costa Rica’s immigration office, around 13,000 Cubans have travelled through this country since last year.

But they have mainly gone unnoticed, because most of them are smuggled by people traffickers, who charge between 7,000 and 13,000 dollars per person.

Carlos Sandoval, an expert on immigration issues, told IPS that the trafficking rings operate throughout Central America, and are also involved in smuggling migrants from the region who are trying to make it into the United States.

And, he added, while a solution for the stranded Cubans is urgently needed, Central America has long been in debt to its own citizens who try to reach the United States.

“An ironic aspect of this humanitarian corridor initiative is that it’s happening in a region that spits out migrants. Around 300,000 people a year set out from Central America in an attempt to make it to the United States,” said Sandoval, a researcher at the University of Costa Rica’s Social Research Institute.

The Central American migrants heading towards the United States face situations just as complex as what the Cubans are going through.

“The case of the Cubans is just one more instance of what is a day-to-day reality in Central America,” said the Costa Rican expert, who for years has studied Central American migration to the United States, carrying out fieldwork in this region, in Mexico, and in the U.S.

Sandoval said the situation requires a regionwide response – something Costa Rica should have had in mind when it issued the first safe-conduct passes. He argued that it is the region’s governments themselves that create the conditions that allow trafficking networks to operate.

“What makes their business possible? It is possible to the extent that the borders are closed: it is so difficult to get there that without the support of these people (traffickers), it is even more complicated and dangerous,” Sandoval said.

Costa Rica plans to open new shelters in the northern town of Upala, because the ones already set up are full, the minister of human development and social inclusion, Carlos Alvarado, told IPS.

“Many of these people (the Cubans) are professionals, others are skilled workers. They are between the ages of 20 and 45. There are more men than women, some 30 children, and around 10 women who are pregnant,” said Alvarado.

Cubans continue pouring into the country, said the minister. On Friday Nov. 20, for example, some 200 people arrived.

On Saturday Nov. 21, Costa Rica’s authorities reported that there are more than 2,500 Cubans in transit in this country.

“Most of them report that they came using their own funds – they sold all they had and left everything behind to go to the United States,” the minister said.