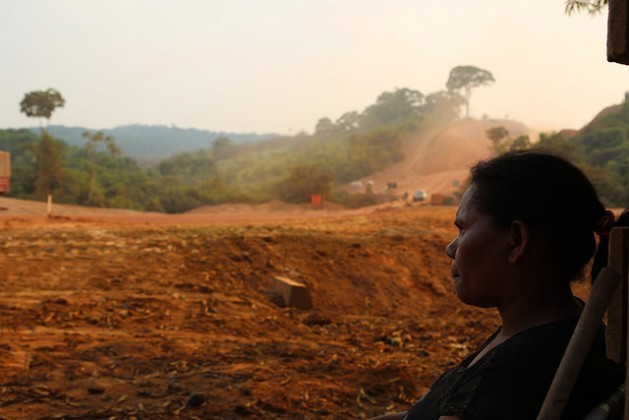 A local small farmer, Rosineide Maciel, watches the road improvement works on highway BR-163, which runs past her house in Itaituba municipality in the northern Brazilian state of Pará. Credit: Fabiana Frayssinet/IPS

MIRITITUBA, Brazil , Jan 8 2016 (IPS) - The BR-163 highway, an old dream of the Brazilian military to colonise the Amazon jungle, was revived by agroexporters as part of a plan aimed at cutting costs by shipping soy out of river ports. But the improvement of the road has accentuated problems such as deforestation and land tenure, and is fuelling new social conflicts.

The 350-km stretch of road between the cities of Miritituba and Santarem in the northern Brazilian state of Pará look nothing like the popular image of a lush Amazon rainforest, home to some of the greatest biodiversity in the world.

Between the two port terminals – in Santarém, where the Tapajós and Amazon Rivers converge, and in Miritituba on the banks of the Tapajós River – are small scattered groves of trees surrounded by endless fields of soy and pasture.

Cattle grazing peacefully or resting under the few remaining trees, taking shelter from the high temperatures exacerbated by the deforestation, are the only species of mammal in sight.

“A common phrase heard in the area along the BR-163 is ‘whoever deforests, owns the land’ – in other words, deforestation has become an illegal instrument for seizing public land.” – Mauricio Torres

“When we came here 30 years ago this was all jungle,” local small farmer Rosineide Maciel told IPS as she and her family stood watching a bulldozer flatten a stretch of the BR-163 highway in front of their modest dwelling.

Maciel doesn’t miss the days when, along with thousands of other Brazilian migrants, she was drawn here by the then-military government’s (1964-1985) offer of land, part of a strategy to colonise the Amazon rainforest.

Thanks to the paving of the highway that began in 2009, it takes less time to transport her cassava and rice to the town of Rurópolis, 200 km from her farm.

“It’s been easier since they improved the road,” she said. “In the past, there were so many potholes on the way to Rurópolis, and in the wet season it took us three days because of the mud.”

BR-163, built in the 1970s, had become practically impassable. The road links Cuiabá, the capital of the neighbouring state of Mato Grosso – the country’s main soy and corn producer and exporter – with the river port city of Santarém.

Of the highway’s 1,400 kilometres, where traffic of trucks carrying tons of soy and maize is intense, some 200 km have yet to be paved, and a similar number of kilometres of the road are full of potholes.

Accidents occur on a daily basis, caused in the dry season by the red dust thrown up on the stretches that are still dirt, and in the wet season by the mud.

But compared to how things were in the past, it is a paradise for the truckers who drive the route at least five times a month during harvest time.

Truck driver Pedro Gomes from the north of the state of Mato Grosso told IPS: “When soy began to come to Santarém, three years ago, sometimes the drive took me 10 to 15 days. Today we do it in three days, if there’s no rain.”

The BR-163 highway runs up to the entrance of the port terminal built in Santarém by U.S. commodities giant Cargill, where the company loads soy and other grains to ship down the Amazon River to the Atlantic Ocean, and from there to big markets like China and Europe.

This and other ports built or planned by different companies in Santarém, Miritituba and Barcarena – in Belem, the capital of Pará, at the mouth of the Amazon River – are part of a logistics infrastructure which, along with the paving of the highway, seeks to reduce the costs of land and maritime transport in northern Brazil.

The river ports and the road improvement have nearly cut in half the transport distance for truck traffic from Mato Grosso, which is around 2,000 km from the congested ports in the southeast, such as Santos in the state of São Paulo or Paranaguá in Paraná.

“Shipping out of ports in the north like Santarém has boosted competitiveness,” José de Lima, director of planning for the city of Santarém, told IPS. “BR-163 is a key export corridor that was very much needed by the country and the region.”

But the country’s agroexport model has many critics. 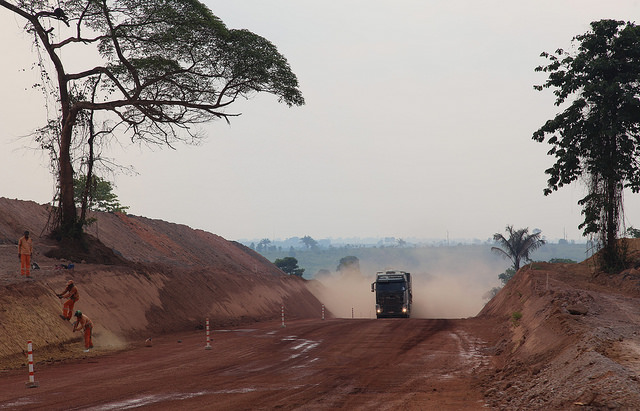 With the soy production boom in Pará, illegal occupations of land have expanded and property prices have soared.

“The paving of BR-163 has heated up the land market,” Mauricio Torres, at the Federal University of Western Pará (UFOPA), told IPS. “As this is happening in a region where illegal possession of land is so widespread and where there is no land-use zoning, it generates a series of social and environmental conflicts.”

This, in turn, has driven deforestation.

“Forests are cut down not only for agriculture but to make fraudulent land claims. A common phrase heard in the area along the BR-163 is ‘whoever deforests, owns the land’ – in other words, deforestation has become an illegal instrument for seizing public land,” he said.

In 2006, the government launched a sustainable development plan for BR-163, aimed at reducing the socioenvironmental impacts caused by the paving of the road, by means of self-sustaining projects for local communities.

“But this pretty much just petered out,” UFOPA chancellor Raimunda Nogueira explained to IPS.

“If the communities along BR-163 are not strengthened, they will undergo a radical transformation,” she said. “For example, land prices are skyrocketing and small farmers are selling out, which accentuates the phenomenon of the latifundio (large landed estates).”

Deforestation in the Brazilian Amazon became more widespread in the 1960s, driven by the expansion of cattle ranching and the timber industry.

However, that did not leave the land completely free of vegetation, according to Nogueira, because subsistence farming “maintained different levels of regeneration of the forest.”

“When the big agricultural producers came in, they cleared all of those areas in the stage of regeneration that maintained a certain equilibrium,” said the chancellor, who estimates that around 120,000 hectares of land have been deforested to make way for soy.

Torres, meanwhile, referred to the emergence of other social problems like prostitution, involving minors as well as adults.

“There are towns in Pará that could turn into huge brothels for truck drivers,” he said.

The residents of Campo Verde, a town of around 6,000 people located 30 km from Miritituba, who depend on the production of palm hearts and on sawmills for a living, have started to feel the effects.

The town is located near the intersection of BR-163 and the 4,000-km Trans-Amazonian highway that cuts across northern Brazil.

“Only soy is going to come through here,” Celeste Ghizone, a community organiser in the town, told IPS. “An average of 1,500 trucks are expected to pass through every day. Just think of how many accidents we’re going to have with all of these truck drivers who drive through like mad men without even slowing down,” he said, adding that he is worried about rising crime and drug abuse rates.

When the improvement of BR-163 – including widening it to a four-lane highway along one major stretch – is completed, an estimated 20 million tons of grains (Mato Grosso currently produces 42 million tons) will be shipped northward to Amazon River ports rather than on the longer routes to ports in the southeast, by 2020.

The dream of agribusiness corporations is to continue expanding the soy corridor, by building a railway to Miritituba.

But Torres complained that “It’s important to stress that a paved BR-163 is not local infrastructure but is for the big soy producers of Mato Grosso. The state of Pará will become merely a transport corridor for soy exports.”