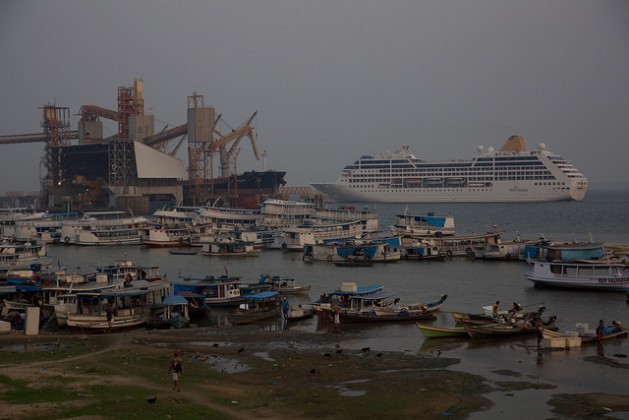 The U.S. agribusiness giant Cargill’s port terminal on the banks of the Tapajós River in the northern Brazilian city of Santarém, where large cargo vessels dwarf the traditional small fishing boats of the Amazon basin. Credit: Fabiana Frayssinet/IPS

SANTARÉM, Brazil, Dec 11 2015 (IPS) - River port terminals in the northern Brazilian city of Santarém are considered strategic by the government. But what some see as an opportunity for development is for others an irreversible change in what was previously a well-preserved part of the Amazon rainforest.

In the evening light on the Tapajós River, whose green-blue waters mix with the darker muddy water of the Amazon River in Santarém, it’s not easy to ignore the silos that overshadow what used to be a public beach, where passenger boats and fishing vessels typical of this part of the Amazon jungle state of Pará tie up.

The port terminal of the U.S. commodities giant Cargill began to operate in 2003 as a centre for the storage, transshipment and loading of soy and corn, in this city of nearly 300,000 people.

The cargo ships and convoys of barges carrying grains are headed for the Amazon River and then the Atlantic Ocean on their way to Europe or China, the biggest markets for Brazil’s main agribusiness exports.

This country is the world’s second-largest producer of soy, after the United States, and the biggest exporter. In the 2014-2015 harvest it produced 95 million tons, 60.7 million of which were exported.

Municipal authorities argue that the river port terminals generate jobs and tax revenue, while they drive the construction and services industries, hotels and fuel supplies.

But Edilberto Sena, a Catholic priest who is the president of the Tapajós Movement Alive, holds a very different view.

“Cargill’s arrival has been a tragedy for Santarém,” he told IPS. “When they began to build the port they argued that it would bring jobs, and while they were building it did create 800 jobs. But as soon as it was completed, most of the workers were fired, and now it employs between 150 and 160 people.”

With a current capacity to export five million tons of grain, the port of Santarém was built to ease the congestion in ports in southern Brazil like Santos in the state of São Paulo, or Paranaguá in the state of Paraná.

This port and the transshipment terminal in Mirituba – 300 km to the south of Santarém – have also cut distances by land and sea for the shipment of soy from the neighbouring state of Mato Grosso, the country’s largest soy producer.

The installation was built by the U.S. agribusiness and food company Bunge, which was later joined by Cargill and other transnational corporations.

As an example, he pointed out that with respect to the port in Santos, from Santarém to the port city of Shanghai, China, “the distance was cut from 24,000 km to 19,500 km, and going through the Panama Canal will reduce the cost from 159 to 147 dollars per transported ton.”

As of 2020, with an investment of around 800 million dollars, the transnational corporations project that they will export 20 million tons a year of grains through the Amazon basin. 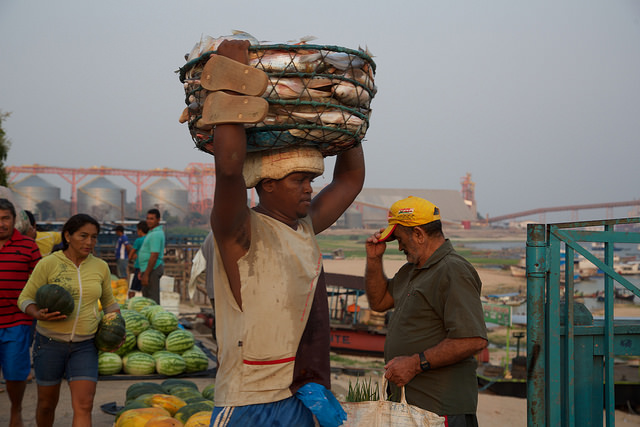 A fisherman carries the day’s catch in the market in the city of Santarém, from the beach now overshadowed by the silos of the river port at the confluence of the Tapajós and Amazon Rivers in the northern Brazilian state of Pará. Credit: Gonzalo Gaudenzi/IPS

Nelio Aguiar, the Santarém secretary of planning, stressed the strategic importance of these ports for the agroexport sector. “Brazil’s GDP is growing, based on agribusiness, which is supporting our economy,” he told IPS.

Most of the cargo arrives by truck, over the BR-163 highway in the process of being repaved, which ends at Cargill’s port terminal.

Currently, during the soy and corn harvest some 350 trucks a day arrive. But Lima estimates that the number will rise to 2,000 a day when other port terminals set to be built in the city are in operation.

That is what worries social organisations and academics who have fought the construction of the port.

“Because the city was not adapted to receive so much cargo traffic, it has caused disruptions and we have seen an increase in the number of accidents due to the intensification of truck traffic,” Raimunda Monteiro, the rector of the Federal University of Western Pará, told IPS.

But despite a number of lawsuits challenging the legality of the Cargill port, construction went ahead with the support of local authorities.

“It destroyed a beach in Santarém and there were also a number of indirect impacts because it attracted more soy producers, who expanded across the Santarém plan. These impacts were not foreseen in the environmental impact study,” Ibis Tapajós, a lawyer who works with social movements, told IPS.

To decongest truck traffic, the city government projects the construction of new access roads and truck parking lots outside of the city.

But there is concern about environmental effects such as contamination of the river and pollution from motor vehicle emissions and from the chemical fertilisers carried by the ships.

“The Cargill port is a clear example of the violation of socioenvironmental rights by large corporations,” said Tapajós.

The construction of at least six new port terminals in Santarém is in the study phase. Two would be next to the Cargill terminal and four would be in the area around Maica Lake.

The most advanced project on the lake – now in the phase of obtaining environmental permits – is to be built by EMBRAPS, a private company.

“Maica Lake is an extremely fragile ecological area,” said Monteiro. “It is at one end of a 50-km series of lakes and canals at the mouth of the Tapajós river and its confluence with the Amazon River.”

The EMBRAPS port is to be built in the Green Area neigbhourhood on the lake, in an area that floods during the rainy season and is without water in the dry season.

There are already signs warning “no trespassers, private property,” and the 480 fisherpersons on the lake are worried about the impact on their activity due to the circulation of the cargo vessels and because a large area will be covered over with soil.

“They’re going to practically privatise the lake,” Ronaldo Souza Costa, the president of the Association of Local Residents of the Perola Neighourhood of Maicá, told IPS. Thirty percent of the fish eaten in Santarém comes from the lake.

“As far as we can tell, there will be a major impact on our fishing, mainly in this area, where we fish in the wintertime. They will mark off no-trespassing areas,” said Raimundo Nonato, the administrator of the Maicá market.
The Santarém city government says the installations will be on dry land and that the companies are not interested in the lake but in the Amazon River, which the waters flow into and which is deep enough for large vessels.

“The entire operation of the trucks will be on ramps. It will not affect the water in the lake at all,” said Aguiar.

But because the local communities have not yet been formally consulted about this and other port projects, fears are growing.

“From what we know, if the ships come near us, our boats will be in trouble because of the big waves, which will be dangerous for our small vessels,” local fisherwoman Telma Almeida told IPS.

After unloading her fish, Almeida casts off and sets out on the Amazon River once again in her small boat. Her silhouette becomes tiny and dim in the shadow of a large cargo vessel.