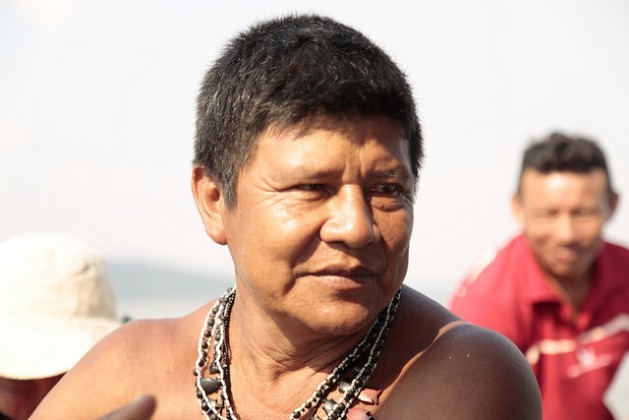 Juarez Saw is the chief of the Sawré Muybu village on the Tapajós River between the municipalities of Itaituba and Trairao in the state of Pará, Brazil. Credit: Gonzalo H. Gaudenzi/IPS

SAWRÉ MUYBU, Brazil , Dec 21 2015 (IPS) - At dusk on the Tapajós River, one of the main tributaries of the Amazon River in northern Brazil, the Mundurukú indigenous people gather to bathe and wash clothes in these waters rich in fish, the staple of their diet. But the “evil spirit”, as they refer in their language to the Sao Luiz Tapajós dam, threatens to leave most of their territory – and their way of life – under water.

“The river is like our mother. She feeds us with her fish. Just as our mothers fed us with their milk, the river also feeds us,” said Delsiano Saw, the teacher in the village of Sawré Muybu, between the municipalities of Itaituba and Trairao in the northern Brazilian state of Pará.

“It will fill up the river, and the animals and the fish will disappear. The plants that the fish eat, the turtles, will also be gone. Everything will vanish when they flood this area because of the hydroelectric dam,” he told IPS.

The dam will flood 330 sq km of land – including the area around this village of 178 people.

According to the government’s plans, the Sao Luiz Tapajós dam will have a potential of 8,040 MW and will be the main dam in a complex of hydropower plants to be built along the Tapajós River and its tributaries by 2024.

But the 7.7 billion-dollar project has been delayed once again because of challenges to the environmental permitting process.

“The accumulative effect is immeasurable. Environmental experts have demonstrated that it will kill the river. No river can survive a complex of seven dams,” Mauricio Torres, a sociologist at the Federal University of Western Pará (UFOPA), told IPS.

"No river can survive a complex of seven dams.” -- Sociologist Mauricio Torres

The Tapajós River, which flows into the Amazon River, runs 871 km through one of the best-preserved areas in the subtropical rainforest, where the government whittled away at protected areas in order to build the hydroelectric dams, which are prohibited in wildlife reserves.

The area is home to 12,000 members of the Mundurukú indigenous community and 2,500 riverbank dwellers who are opposed to the “megaproject” – a Portuguese term that the native people have incorporated in their language, to use in their frequent protests.

The Mundurukú have historically been a warlike people, and although they have adopted many Brazilian customs in their way of life, they still wear traditional face paint when they go to the big cities to demonstrate against the dam.

Village chief Juarez Saw complains that they were not consulted, as required by International Labour Organisation (ILO) Convention 169 concerning Indigenous and Tribal Peoples in Independent Countries, which has been ratified by Brazil.

The process of legalisation of their indigenous territory has been interrupted by the hydropower project.

“We aren’t leaving this land,” he told IPS. “There is a law that says we can’t be moved unless an illness is killing indigenous people.”

The village is located in a spot that is sacred to the Mundurukú people. And they point out that their ancestors were born here and are buried here.

“This is going to hurt, us, not only the Mundurukú people who have lived along the Tapajós River for so many years, but the jungle, the river. It hurts in our hearts,” said the village’s shaman or traditional healer, Fabiano Karo.

The interview is taking place in the ceremonial hut where the shaman heals “ailments of the body and spirit.” He fears being left without his traditional medicines when the water covers the land around the village – and his healing plants.

Academics warn that the flooding will cause significant losses in plant cover, while generating greenhouse gas emissions due to the decomposition of the trees and plants that are killed. 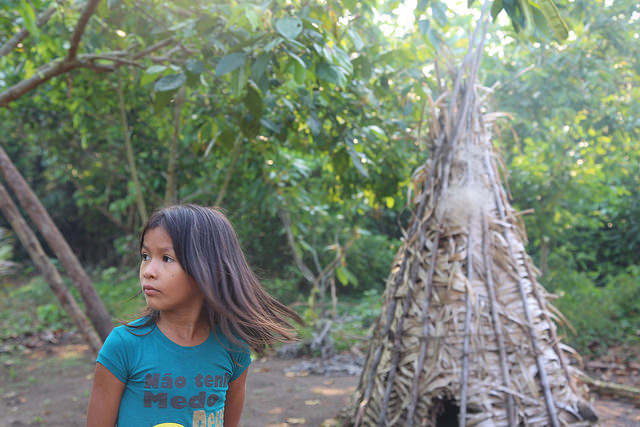 A little girl in Sawré Muybu, an indigenous village on the Tapajós River between the municipalities of Itaituba and Trairao in the northern Brazilian state of Pará. Credit: Fabiana Frayssinet/IPS

This biodiversity-rich river basin is home to unique species of plants, birds, fish and mammals, many of which are threatened or endangered.

“The impact will be great, especially on the aquatic fauna, because many Amazon River basin fish migrate from the lower to the upper stretches of the rivers to spawn,” ecologist Ricardo Scuole, at the UFOPA university, explained to IPS.
“Large structures like dikes, dams and artificial barriers generally hinder or entirely block the spawning migration of these species,” he said.

The village of Sawré Muybu currently covers 300 hectares, and the flooding for the hydroelectric dam will reduce it to an island.

María Parawá doesn’t know how old she is, but she does know she has always lived on the river.

“I’m afraid of the flood because I don’t know where I’ll go. I have a lot of sons, daughters and grandchildren to raise and I don’t know how I’ll support them,” Parawá told IPS through an interpreter, because like many women in the village, she does not speak Portuguese.

A few hours from Sawré Muybu is Pimental, a town of around 800 inhabitants on the banks of the Tapajós River, where people depend on agriculture and small-scale fishing for a living.

This region was populated by migrants from the country’s impoverished semiarid Northeast in the late 19th century, at the height of the Amazon rubber boom.

Pimental, many of whose inhabitants were originally from the Northeast, could literally vanish from the map when the reservoir is created.

“With the impact of the dam, our entire history could disappear underwater,” lamented Ailton Nogueira, president of the association of local residents of Pimental.

The consortium that will build the hydroelectric dam, led by the Eletrobrás company, has proposed resettling the local inhabitants 20 km away.

But for people who live along the riverbanks, like the Mundurukú, the river and fishing are their way of life, sociologist Mauricio Torres explained.

The Tapajós River dams are seen by the government as strategic because they will provide energy to west-central Brazil and to the southeast – the richest and most industrialised part of the country.

“The country needs them. Otherwise we are going to have blackouts,” said José de Lima, director de of planning in the municipality of Santarém, Pará.

But the Tapajós Alive Movement (MTV), presided over by Catholic priest Edilberto Sena, questions the need for the dams.

“Why do they need so many hydropower dams on the Tapajós River? That’s the big question, because we don’t need them. It’s the large mining companies that need this energy, it’s the São Paulo and Rio de Janeiro markets that need it,” he told IPS.

It’s evening in Sawré Muybu and the families gather at the “igarapé”, as they call the river. While people bathe, the women wash clothes and household utensils.

From childhood, boys learn to fish, hunt and provide the village with water. For the community, the river is the source of life.

“And no one has the right to change the course of life,” says Karo, the local shaman.