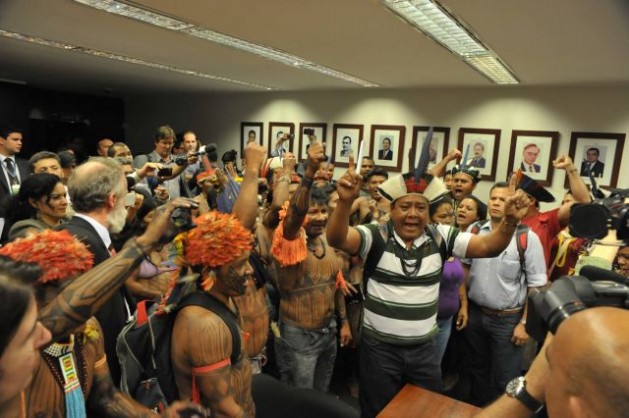 The 10 Mundurukú chiefs and 30 warriors made the trek to the capital of Brazil to demand the demarcation of their territory and the right to prior consultation in order to block the Tapajós hydroelectric dam, which could flood several of their villages.

“No one from the government has come to talk to us,” Juarez Saw, the 45-year-old chief of Sawre Muybu, one of the affected Mundurukú villages, told IPS by phone from Brasilia. “For us, the land is our mother. It is where we live and raise our kids and grandkids. We have nowhere to go if the government forces us off.”

The Brazilian government, which is already building the Belo Monte mega-dam on the Xingú river in the northeastern Amazon state of Pará, also wants to construct another huge hydropower complex on the Tapajós river, in the same state.

The complex, in the heart of Amazonia and in an area of significant gold deposits, is to involve the construction of five dams in the Tapajós basin, with an estimated power potential of 10,700 MW.

Seven conservation units are green areas on the map, scattered between the three largest cities along the Tapajós river: Santarém (population 300,000); Itaituba (population 130,000); and Jacareacanga (population 40,000).

The 6,133 MW São Luiz do Tapajós hydropower dam will be the largest. The other dams planned in the complex are Jatobá, on the same river, and Jamanxin, Cachoeira do Caí and Cachoeira dos Patos, on the Jamanxin river.

The complex is to begin to operate between 2017 and 2020, according to the state-run company Empresa de Pesquisa Energética.

Some 13,000 Mundurukú Indians will be affected along the Tapajós river, and the project will also impact the Kayabi and Apiaká communities – bringing the number of indigenous people impacted by the dams to 20,000.

The Mundurukú chiefs and warriors came to Brasilia on Tuesday Dec. 10 and Wednesday Dec. 11 to demand that the government make faster progress demarcating their lands along the middle stretch of the Tapajós river.

Until the demarcation process has been completed, people from the villages along the middle stretch of the river run the risk of being displaced, with their land flooded.

On Tuesday, the indigenous demonstrators protested against the dams on the Tapajós and the nearby Teles Pires river, in the lower house of Congress and outside the attorney general’s office, where they called for the repeal of decree 303.

The decree, which the attorney general’s office issued in July 2012, created the regulations to be followed by public defenders and prosecutors in legal proceedings on the demarcation of indigenous land throughout the country, with the stated aim of ensuring legal stability.

But the decree also laid out the foundations for the state to install in the reserves equipment, communication networks, streets and the constructions necessary to provide public services like healthcare and education.

This aspect of the decree limits indigenous people’s control over who has access to and uses their territory, while infringing on their right to prior consultation about activities and economic projects carried out in their territories, according to the Catholic Indigenous Missionary Council (CIMI).

“We are once again shouting out against hydroelectric complexes in the region,” CIMI executive secretary Cleber César Buzatto told IPS from Brasilia. “It is a difficult situation – we perceive that the government has made a political decision not to demarcate any indigenous land.”

In his view, the conflict-ridden situation has been aggravated by “the inertia of the executive branch, which is not moving forward with the administrative procedures” set out by the constitution, such as demarcation of indigenous land and indigenous people’s right to prior consultation.

“We are confident in the native people’s power of resistance to defend and secure their rights. The central question is that the government must recognise these rights and demarcate the land of the Mundurukú along the middle stretch of the Tapajós river – the area that will be affected by the São Luiz hydropower plant,” Buzatto said.

The delegates came from different villages on the upper Tapajós river, where there is already one demarcated reserve, and on the middle stretch of the river, where the villagers do not yet hold legal title to their land.

“Our main struggle is for demarcation,” Saw told IPS. “We haven’t come to make threats. They don’t pay any attention to us – only when we come to Brasilia. It’s very tiresome to come here and return without any answers.”

His village, Sawre Muybu, was founded in 2008 and is home to 20 families – 150 people. It is located 50 km from Itaituba along the BR-230 trans-Amazonian highway – or over one hour away by river.

According to the chief, before the villages were founded along the middle stretch of the Tapajós, the Mundurukú lived in riverbank communities where they were losing their traditions and customs.

“We are in Brasilia to find out why the president of the National Indian Foundation [the government agency FUNAI] doesn’t want to sign the anthropological report,” he said.

Saw said the first anthropological report documenting the Mundurukú people’s roots on the land along the middle stretch of the Tapajós river was carried out in 2007, but was never delivered.

A new study had to be conducted, which has been ready since the middle of the year, waiting to be signed by FUNAI president Maria Augusta Assirati, in order for the demarcation to go ahead.

Saw said the people of Sawre Muybu found out in 2010 from Movimento Tapajós Vivo activists that the village could be flooded.

During their visit to the capital, the indigenous protesters stayed at a CIMI rural property 40 km outside of the city.

CIMI head Buzatto said “they came to us seeking support to demand these things from the government which, unfortunately, does not recognise that it is failing to respect the rights of the people in that region.”

In response to questions from IPS, FUNAI said the agency’s president had not planned on meeting with the Mundurukú chiefs and warriors but decided to meet with them on Wednesday as a result of their protests.

In May, the Mundurukú invaded and occupied for two weeks a plant of the company building the Belo Monte dam located 830 km by road from their territories, in solidarity with the people affected by that project, and to call for the suspension of the construction of hydropower dams on their rivers as well.

In June, they came to Brasilia to negotiate with the government. But because they did not agree to send only a limited group of delegates, the authorities sent two airplanes to transport 144 representatives.

Shortly afterwards, that same month, they took hostages – three biologists who were studying the local flora and fauna for the environmental impact studies for the dams. With that protest measure, they managed to delay the process until August. And before the study could get underway again, the government and FUNAI had to give prior notice to the indigenous community.