LIMA, Feb 13 2013 (IPS) - Representatives of native communities in the Amazon region of Peru, where the first ever “prior consultation” about a project affecting their territory will be held, have pressured the authorities into promising that their views will be taken into account every step of the way. But the government’s word is no longer enough to assuage their mistrust. 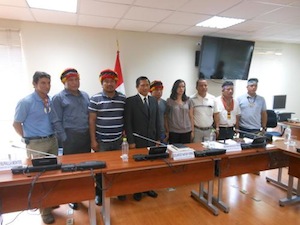 Native leaders from the Amazon at the meeting of the Congressional working group. Credit: Puinamudt

“If they want to be respected, they must also respect our decisions. It’s not just about direct respect for the son; respect is first due to the father,” said Andrés Sandi, an Achuar Indian and president of the Federation of Native Communities of the Corrientes River (FECONACO).

Sandi wore a headdress of red and yellow feathers, symbolising his status as an “apu” (leader), when he talked to IPS a few days after a series of meetings with authorities in Lima on Jan. 24-31, together with other leaders of indigenous organisations in the northern department (or province) of Loreto in Peru’s Amazon region.

The purpose of their journey from the depths of the Amazon jungle to the Peruvian capital was to drive home to the authorities that there can be no consultation unless there is prior respect for the representatives of native organisations.

The leaders complained that technical personnel from PeruPetro — the state company responsible for putting out to tender the Loreto oil lot 192, known as Lot 1AB – attempted to enter their territory in late January without consulting the leaders. “We will stop everything dead if our voices are not heard,” they warned.

This is the first time that the Law on the Right to Prior Consultation of Indigenous or Original Peoples on all actions within their ancestral lands will be implemented in Peru. Promulgated in August 2011, the law was provided with regulations to define its concrete policies in April 2012.

"Indigenous people have lost confidence in the state."
FECONACO is part of a coalition, the Amazonian Indigenous Peoples United in Defence of their Territories (PUINAMUDT), which includes three other organisations of members of the Achuar, Urarina, Kukama-Kukamira, Secoya, Matsés and Quechua ethnic groups.

“The PeruPetro authorities have had to alter their approach because they cannot get around the way these communities organise and take decisions,” Congresswoman Verónika Mendoza told IPS.

Mendoza belongs to the congressional working group that is developing the consultation process. On Feb. 4, the commission called in the PeruPetro authorities for talks on the issue. At the meeting, the lawmakers called the company to account for its actions, and its executives committed themselves to keep native people informed at every step.

The law’s regulations say that consultations must be held directly with members of the indigenous peoples affected by economic activities being developed in their territory.

This new process marks the long-awaited fulfillment of Peru’s ratification in 1994 of the International Labour Organisation’s (ILO) Convention 169 on Indigenous and Tribal Peoples in Independent Countries.

According to Mendoza, the law and its regulations are one thing, and what actually happens on the ground is quite another. Carrying out consultations without involving the apus is not viable, she argues.

“However, some positive steps have been taken,” said Mendoza, highlighting a point in PeruPetro’s presentation to Congress: if there are found to be impacts on the collective rights of the native peoples, “adjustments in the texts of the basis and model of the contract” could be incorporated for the new company operating the lot.

In 2015 the concession on Lot 1AB expires, and the tendering process for the new concession, as well as the contract with the winning company, must include proposals arising from prior consultation with the native peoples.

On Jan. 30, representatives of the four indigenous organisations put forward their observations and recommendations about the present and future situation to the current operator, Pluspetrol Norte, at a meeting at PeruPetro’s headquarters.

“We refuse to be taken by surprise by the authorities,” said Sandi, of FECONACO. He used an analogy to sum up native people’s fears: “Indigenous people have lost confidence in the state; it is as though you hit a child, and then say ‘It’s OK, I’m not going to hit you any more’; (the child) is not sure if it is true, or not,” he said.

The leaders want greater openness from the authorities responsible for consultation. Their criticism is directed partly at the Vice Ministry for Intercultural Affairs, the government body in charge of the process, which has created a database of the native peoples to be consulted, but has not yet published it.

IPS requested an interview with Intercultural Affairs Vice Minister Iván Lanegra, but he declined to comment at this time.

However, reports have emerged that his office has identified 52 native cultures, 48 of which are in the Amazon region and four in the Andean region of the country. It has also been said that this year, the vice ministry intends to carry out five consultations on the same number of projects.

In October 2012, the Vice Ministry of Intercultural Affairs said the first consultation would be carried out in February or March of 2013, but the lack of trust on the side of indigenous people and the vagaries of government policy make this goal an elusive one.

In spite of the difficulties, representatives of indigenous peoples and of PeruPetro agreed to meet in the second half of February in the city of Iquitos, the capital of Loreto, to coordinate a timetable and a mechanism for the first consultation. A date for the actual consultation could emerge from this meeting.

But reaching an agreement is not just a matter of fixing a timetable.

The native communities in Loreto showed the authorities scientific proof of the environmental impact of 40 years of oil exploitation in their waters and on their territory.

They communities have videos, photographs, and technical reports drawn up by their own environmental monitors. In their view, no consultation can negate these findings, related as they are to indigenous peoples’ basic rights.

In Lima they met with representatives of the multisectorial commission responsible for indigenous peoples’ environmental and social problems, which is headed by the Presidency of the Council of Ministers.

At the meeting they said that a new concession for Lot 1AB will not be possible without previously arriving at concrete solutions to remedy environmental damage.

Pressure from these organisations led environmental monitoring agencies to carry out an analysis of the degree of pollution in the area. The work began in the Pastaza river basin and the results were alarming.

In early February, PUINAMUDT received a preliminary report from the Environmental Assessment and Oversight Agency (OEFA), which indicates that in some cases the concentration of toxic chemicals in the waters of the Pastaza river were over 90 times the permitted limits.

Indigenous organisations have still not received the final report, but they are already examining the preliminary findings in order to communicate them to their communities and warn them of the risks.

“First of all, we are going to ask for this type of study to be carried out in the other river basins, to obtain the results. Then we will tell the state: now take responsibility and clean it up,” said Aurelio Chino, president of the Pastaza River Quechua Indigenous Federation (FEDIQUEP).

“We can’t accept consultations without such a commitment,” Chino told IPS, flanked by a delegation of apus, all wearing their red and yellow headdresses.