They work with the precision of technicians and the enthusiasm of volunteers. They are indigenous inspectors documenting the damages caused by oil industry activity in three river basins in the Peruvian Amazon region. 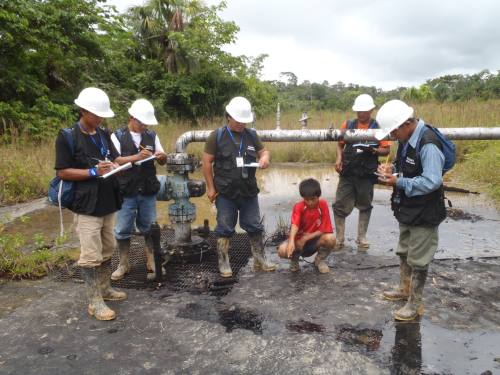 LIMA, Dec 12 2012 (IPS) - At the end of every month, with the skill of an environmental engineer, Wilson Sandi prepares a work plan that will be used by Achuar indigenous people, like him, to document the scars left by 40 years of oil drilling in the Peruvian Amazon region of Loreto.

Sandi is the coordinator of the Environmental Monitoring Programme created by the Federation of Native Communities of the Corrientes River (FECONACO), which focuses its efforts on Lot 1AB and Lot 8, operated by the Argentine oil company Pluspetrol Norte.

Using GPS equipment, photographs and video recordings, the monitors document oil industry-related environmental liabilities that date back many years, as well as new oil leaks in rivers, streams and soils on which indigenous communities depend for their survival.

Since FECONACO began implementing the programme in 2006, 120 leaks have been documented. Together with two other indigenous organisations in the vast territory of Loreto, in northeastern Peru, they have discovered environmental liabilities that even the government had not detected, and which are therefore not included in official records.

All together, the monitors from FECONACO, the Quechua Indigenous Federation of the Pastaza River (FEDIQUEP) and the Federation of Native Communities of the Alto Tigre River (FECONAT) comprise more than 40 inspectors who travel up and down these three river basins.

They are the trained eyes of the communities, who accumulate technical evidence to back up the denunciations and demands made by indigenous leaders to the government and the company, within a general climate of mistrust.

“This is the best mechanism that we have adopted as organisations,” Quechua leader David Chino, the vice president of FEDIQUEP, told Tierramérica*.

A fourth organisation, the Cocama Association for the Development and Conservation of San Pablo de Tipishca (ACODECOSPAT), will soon replicate the initiative in the Marañón River basin to fill the large void left there by the government.

After four decades of oil drilling in Loreto, Peru has not managed to compile a complete and up-to-date registry of the environmental liabilities created by this industry in the region, much less in the rest of the Amazon region and the country as a whole.

Some 9,000 abandoned oil wells have been documented, mainly in the northern area of the country. More than 6,000 were improperly sealed and represent some type of environmental impact. Of the total, only 300 of the abandoned wells recorded are in the rainforest, engineer Jorge Villar from Peru’s energy and mining investment regulator, OSINERGMIN, told Tierramérica.

The government has made very little progress in locating abandoned and poorly sealed wells in the rainforest. As a result, “we are doing what the authorities should have dealt with a long time ago,” Sandi commented to Tierramérica.

Through their monitoring and documentation efforts, the indigenous leaders succeeded in capturing the government’s attention. A parliamentary delegation visited the area earlier this year and prepared a report on the situation.

They also managed to get the environmental control authorities to initiate the administrative processes for a field investigation and the environmental mapping of these river basins in Loreto. The ultimate goal is the updating of the registry of liabilities and new damages.

When Pluspetrol Norte began to operate in the area, the damages left behind in Lot 1AB by the U.S. oil transnational Occidental Petroleum (Oxy) had not been fully documented, as anthropologist Peter Rodríguez, an advisor to FEDIQUEP, told Tierramérica.

For the moment, the compilation of a full inventory of environmental liabilities, mandated by a law passed several years ago, remains at a standstill because OSINERGMIN and the new environmental regulatory agency created within the Ministry of Environment, the OEFA, cannot agree upon which agency should be responsible for this task.

Frustrated with this bureaucratic limbo, indigenous communities decided to take matters into their own hands, said Sandi.

“In the past the company would say, this picture could be from Ecuador. Who knows where it was really taken? But now all of our photographs and videos are stamped with coordinates. We don’t lie,” he added.

As a result of legal proceedings initiated by indigenous communities, the Dorissa Agreement was signed in October 2006 between Pluspetrol Norte, FECONACO and the regional government of Loreto, under which the company was to undertake remediation and development work in the areas affected. Among the commitments assumed by the company was financing of the indigenous environmental monitoring programme.

In addition, the company is obliged to supply information in order for the monitors to carry out their work.

The indigenous organisations provide ongoing training for the monitors on matters related to environmental engineering, hydrocarbons, the operation of equipment, and other subjects.

And today it is these organisations who have the most complete databank of environmental damages. FECONACO alone has compiled 22,500 digital files.

The work of the monitors is grueling. For two weeks out of every month, they make their way through endless kilometres of dense rainforest, and their work day rarely lasts a mere eight hours. While the monitors initially took part as volunteers, those who work in the Corrientes River basin now receive a symbolic salary of just under 300 dollars a month.

All of the monitors are selected by their own community, and most have completed secondary school. They range in age between 18 and 60.

They are also given ongoing encouragement to keep up their efforts, so as to continue gaining ever greater skills and knowledge. This is important, since some younger monitors have been lured away by Pluspetrol to work on its own monitoring teams, or tempted with new jobs in the city, said Rodríguez.

Now the organisations are pushing for official recognition of this programme by the Loreto regional government and adoption of a proposed law on indigenous environmental monitoring.

The political context is interesting. The first prior consultation undertaken in Peru in compliance with the International Labour Organisation’s (ILO) Convention 169 on Indigenous and Tribal Peoples in Independent Countries is scheduled to take place in Loreto.

Indigenous leaders see this as an opportunity to demand that the government provide solutions for the environmental damages that have accumulated here over the course of decades.