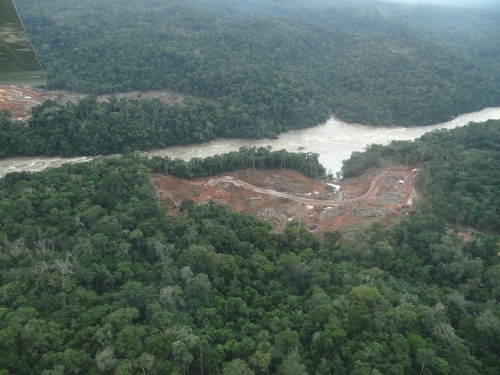 Area of jungle cleared for the construction of the Tele Pires hydroelectric dam. Courtesy of Companhia Hidrelétrica Teles Pires

RIO DE JANEIRO, Aug 20 2012 (IPS) - The Sete Quedas or “seven waterfalls” on the Teles Pires River, which runs through the Amazon rainforest states of Mato Grosso and Pará in central Brazil, are a spiritual oasis venerated by several indigenous groups.

But the 20-metre-high rocky falls are to be covered by a reservoir created by a hydroelectric dam that is to flood an area of 95 square km.

“It’s a sacred area, our creator and mother. And the ‘pajé’ (shaman) says it is where the fish lay their eggs,” João Kayabi, 52, told IPS by phone from the area. He is the chief of Kururuzinho village, home to 106 members of the Kayabi community, who speak a Tupí-Guaraní language.

For the Kayabi, the area around Sete Quedas must be left untouched, because it is the dwelling of a god who is responsible for the natural balance.

“It will be left underwater, and will only be a memory. We are trying to keep that from happening,” Kayabi said.

Sete Quedas is also sacred to two other indigenous communities: the Apiaká and the Mundurukú. For the latter, the falls are “the mother of fish” and the dwelling-place of their ancestors.

“The Mundurukú say the river is going to dry up, there will be a shortage of food, and the fish will vanish. I hope that isn’t so,” Kayabi said.

Studies on the biodiversity in that stretch of the river, carried out by Brazil’s Energy Research Company (EPE), which conducts research for the Ministry of Mines and Energy, have identified nearly 700 plant species and more than 200 species of fish, such as the spotted sorubim (Pseudoplatystoma corruscans) catfish, the common dolphinfish (Coryphaena hippurus), and the jau (Zungaro zungaro) catfish.

The Teles Pires has the reputation of being one of the world’s best rivers for fishing.

In the indigenous territory where João Kayabi’s village is located, nearly 300 people make a living from hunting, fishing and harvesting fruit.

“Up to now, our land has provided for us sufficiently. But we are concerned about what will happen in the future, and whether food will be scarce,” said the chief, a father of seven. “I’m worried about my children; I don’t know what will become of their lives.”

The Teles Pires plant will have a generating capacity of 1,820 MW. But the Companhia Hidrelétrica Teles Pires, the company that was granted the concession for building the dam, is fighting a judicial battle to be able to finish construction.

The case has been winding its way through the courts. In early August, a regional federal court ordered suspension of construction of the dam. But the attorney general’s office and Brazil’s environmental protection agency IBAMA appealed, and the suspension was lifted on Aug. 14.

“The natural resources that are indispensable for indigenous people to sustain their lifestyle and culture are being plundered,” Batista told IPS.

Early this year, the office of the public prosecutor brought a civil lawsuit to revoke the environmental license granted by IBAMA in August 2011 and bring construction to an immediate halt.

According to Batista, the environmental licensing process is flawed. “At no time has the magnitude of the impact on indigenous lands been fully understood.”

Although the tribes will not have to be relocated, they are afraid to remain in their villages “because in case of accidents, such as a break in the dam, the water would carry them away,” Batista said.

The Kayabi villages are only 50 km from the dam.

“There is no solution when it’s a government plan, we have no way to fight this,” Kayabi said. “The only way is to seek support and guidance. The dam will be built, and we are the ones who will be hurt by it, we could lose our rights.”

One of the irregularities noted by the office of the public prosecutor was the company’s failure to consult with the affected indigenous communities prior to the start of construction, as required by law. In March, work on the dam had already been suspended in response to the prosecutors’ request.

But the Companhia Hidrelétrica Teles Pires responded that “all of the public hearings were held in the presence of the concerned parties, and were filmed and recorded,” according to a statement issued by the justice system.

According to the company, the plant will supply 2.7 million families. The energy generated will feed the national grid.

Court battles are being waged against dozens of other hydroelectric dams in the Amazon rainforest as well. On Aug. 13, the same regional federal court ordered a halt to the construction of the Belo Monte dam on the Xingu River, which is to be the world’s third largest dam.

The construction of some 30 Amazon jungle dams should be the object of “urgent debate in society,” said the coordinator of the Amazon Investment Observatory, Alessandra Cardoso.

Cardoso, who is also a researcher with the Institute for Socioeconomic Studies (INESC), is the author of “A Corrida por Megawatts: 30 hidrelétricas na Amazônia Legal” (“the race for megawatts: 30 hydroelectric dams in the Amazon region”), a technical study published Jul. 26.

“There is already major debate on the social and environmental costs and the impacts that it would be impossible to mitigate, with respect to the dams, especially large ones like Jirau, Santo Antônio, Belo Monte, Teles Pires, and São Luiz do Tapajós,” Cardoso said in an interview with IPS.

“How to measure and assess, for example, the destruction at Sete Quedas? How to evaluate the socio-environmental impact caused by thousands of migrants who will be drawn to the region by one of these large infrastructure works?” she asked.

She also said that an overall assessment was needed of the effects of the dams in general and the modifications of the territory “in dense jungle zones which have extremely high concentrations of biodiversity, which has been preserved precisely because of the sparse, ecologically friendly population of traditional peoples,” she said.

Cardoso said the environmental licensing process has a limited capacity to obtain a realistic evaluation of costs and impacts of hydropower dams in the Amazon region.