RIO DE JANEIRO, Oct 26 2011 (IPS) - Activists opposed to the construction of the Belo Monte hydropower dam in the Amazon jungle say the Brazilian government’s decision to boycott an Inter-American Commission on Human Rights hearing represents a “radical” shift in the country’s foreign policy. 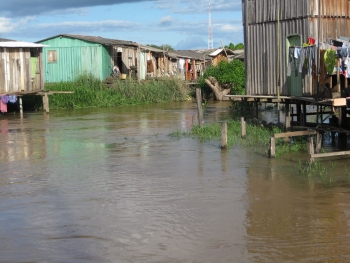 A poor neighbourhood in Altamira, Brazil, flooded during the rainy season, will be left permanently under water by the Belo Monte dam. Credit: Mario Osava/IPS

The closed IACHR hearing held Wednesday Oct. 26 in Washington, D.C. was aimed at fostering dialogue to resolve the conflict over the Belo Monte hydroelectric dam on the Xingu river in Brazil’s Amazon rainforest.

It was also held to discuss the Brazilian government’s failure to implement measures requested earlier by the IACHR to protect indigenous communities threatened by the megaproject in that part of the northern state of Pará.

Sheyla Juruna, a leader of the Juruna indigenous people who are affected by the dam, said “The government’s constant refusal to engage in dialogue and its un-diplomatic posturing shows its negligence as it sidesteps the law and ignores the rights of local peoples.”

A statement released by the San Francisco-based environmental and human rights group Amazon Watch Wednesday quoted Juruna, who travelled for days from the Xingu region to express her concerns at the closed hearing, as saying “I am appalled by the way in which we are treated in our own land without even the right to be consulted on this horrific project.”

According to Amazon Watch, Brazil’s refusal to take part in the hearing “threatens to set a chilling precedent for human rights and sustainable development throughout the Americas.”

“This flies in the face of the image Brazil promotes of a regional leader and host of important international environmental events like Rio +20 next year,” attorney Jacob Kopas of the Inter-American Association for Environmental Defence (AIDA), an environmental and human rights group representing affected communities, told Amazon Watch.

On Friday Oct. 21, the government informed the IACHR that it would not be sending a representative to the hearing, and said the measures requested earlier were being applied in accordance with “the Brazilian legal system and the social and environmental requirements for construction of the dam.”

This “abrupt change, without precedent in the democratic history of Brazil, indicates a breakdown of dialogue within the multilateral (Organisation of American States) system,” Caldas said at the news briefing.

On Apr. 1, the IACHR recommended that the Brazilian government “immediately suspend the licensing process for the Belo Monte hydroelectric project” and “any material works” to protect the rights of local indigenous people.

The OAS body also asked the government to undertake “free, prior, informed, in good faith, and culturally appropriate” consultations with the indigenous people, provide access to a social and environmental impact assessment translated into their respective native languages, and take measures to “protect their lives and personal integrity” as well as prevent the spread of diseases and epidemics arising from the Belo Monte project or caused by a massive influx of outsiders.

On Jul. 29 the IACHR modified and extended these precautionary measures on the basis of information provided by the Brazilian government and complainant organisations.

The power plant, scheduled to come onstream in 2015, will affect 100 km of the “Big Bend” of the Xingu river, flooding some 520 square kilometres. According to activists, it will have a direct impact on between 16,000 and 25,000 people.

The run-of-the-river technology chosen for the project involves a smaller reservoir than traditional hydroelectric dams, but diverting the river through canals will reduce the flow in the Big Bend and could cause drought in an area occupied by two indigenous communities of about 200 people and hundreds of families living along the banks of the river.

In spite of the protests, the Brazilian Environment Institute (IBAMA) authorised construction to begin in June.

The government took “an unprecedented stance, threatening, disrespecting and delegitimising the inter-American system for the protection of human rights,” said a communiqué from Justiça Global and other organisations, like the Xingu Forever Alive Movement that represents people living in the river’s basin.

This is added to other forms of “blackmail,” according to Caldas, like the withdrawal of the candidacy of former human rights minister Paulo Vannuchi to the IACHR, and the threat to withhold contributions to the OAS.

In the view of Roberta Amanajás, a lawyer with the Pará Society for the Defence of Human Rights, the Brazilian government’s “hasty retreat is even more serious because of this country’s role in Latin America.

“Brazil has shown an arrogant, anti-democratic attitude, and has broken off dialogue,” she said.

The government has not made any public statement, but in its letter to the IACHR it argued that the executive, legislative and judicial branches are “impartially and independently monitoring compliance with the requirement to protect the human rights of members of communities living in the project’s zone of influence.”

The 12 billion dollar hydroelectric plant will be one of the largest in the world, with a capacity of 11,233 megawatts, designed to supply electricity to 26 million of Brazil’s 192 million people, including high-consumption urban areas like the southern city of Sao Paulo.

According to the government of Dilma Rousseff, Belo Monte will be a key source of electricity that will meet increasing demand in a simple, renewable way.

But in the view of environmental organisations and local movements, its social and environmental impacts, which will harm wildlife, subsistence farming, water supply and fishing, have not been studied in enough depth.

According to Antonia Melo, the leader of the Xingu Forever Alive Movement, impacts are already becoming evident in the city of Altamira – 900 km from Belém, the capital of Pará – to which outsiders are flocking, hoping for one of the 20,000 jobs promised on the project.

Melo told journalists that the area is in a state of “social chaos” because Norte Energia, the consortium responsible for building the plant, has not carried out the promised measures to compensate for impacts.

In the past year, violent incidents have increased by 28 percent, Melo said, especially crimes like the sexual exploitation of minors. Migration, which raised the local population by 30 percent, means that hospitals are overflowing and the health of indigenous people is jeopardised.

Before construction started, health posts treated 20 people a weekend, and now they have to care for 100, she said. Illegal land occupation and lumber extraction on indigenous lands have also increased.

The Altamira city government, held by the opposition Brazilian Social Democratic Party, city councillors, the business community and local traders added their voices to the complaints, although initially they had believed the hydroelectric project would bring progress.

“Workers from different parts of the country are going to the city to look for jobs. But Altamira hasn’t got the infrastructure for health, education, transport, sanitation and security, and cannot cope with the sudden growth in its population and, at the same time, avoid the social chaos that has accompanied large engineering works in the Amazon region,” says a city government document.

Caldas and Amanajás said that a report by the National Indian Foundation (FUNAI), the state agency in charge of indigenous affairs, found an increase in the incidence of malaria in Pará, where the state average was 9.4 percent, with much higher figures among indigenous groups, while in the rest of Brazil the average incidence was 1.67 percent.

Belo Monte is part of the government’s Accelerated Growth Programme, which aims to improve infrastructure through projects that also generate jobs and development.

At a press conference with international journalists in September, Environment Minister Izabella Teixeira justified the licensing of the construction that was later temporarily suspended by the justice authorities.

The license had been issued after carrying out the necessary environmental impact studies, and every precaution requested had been taken, Teixeira said.