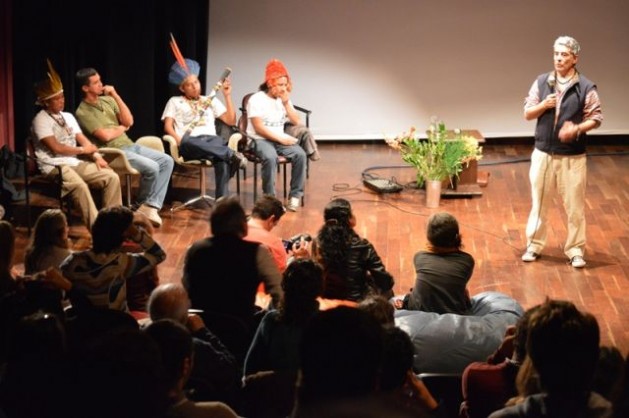 Pedro Bara explains to indigenous people and activists the tool developed by the WWF to guide negotiations over hydropower projects in the Amazon. Credit: Courtesy of Denise Oliveira/WWF Living Amazon Initiative

SAO PAULO, Aug 27 2013 (IPS) - In the war over major hydropower dams in the Amazon jungle, everyone loses – even the winners who manage to overcome the opposition and build them, but who suffer delays, costs that are difficult to recoup, and damage to their image.

“The polarisation impoverishes the debate on the use and preservation of natural resources,” Pedro Bara, head of the WWF Living Amazon Initiative’s Infrastructure Strategy, said in this interview with IPS.

WWF stands out for seeking negotiated solutions to the dispute between economic questions and the preservation of nature. In the case of hydroelectric dams, it is calling for dialogue to resolve the confrontations between the business and government interests involved and a diverse array of opponents, including affected communities, and social, indigenous and environmental movements.

The aim is to outline a broad strategy for the Amazon rainforest, overcoming the project-by-project focus that is not based on any proven parameters.

To that end, the Brazilian chapter of WWF developed a tool based on scientific studies, which makes it possible to have an idea of what is needed to preserve water and biodiversity and keep the Amazon alive.

Q: How can nature be protected in the Amazon jungle in the face of encroachment by hydropower dams, cattle, soybeans, logging and mining companies, and roads?

A: Six years ago, we decided to ask ourselves what we would need to preserve of the Amazon rainforest from here on out. It’s not 100 percent of what’s left, but it can’t all be used for development either.

If we were completely familiar with the area’s biodiversity, it would be easy to define priority areas. But we don’t have enough information on biodiversity in the Amazon. I think we know about only 40 percent of the total, at the most.

We were forced to draw broad conclusions about biodiversity based on the variety of environments. Different environments will have different species. You make approximations. We have conducted several tests in Madre de Dios [a region in southeastern Peru] on how to plan the conservation of water in data-poor areas.

We concluded that by cross-referencing slope with surface run-off, water flows, vegetation and sources of water, you can get a good explanation of the variety of aquatic species and classify rivers by segments. We expanded that model to the entire Amazon basin.

Q: Did you choose Madre de Dios because the ecology there is representative of Amazonia?

A: No, it was because it contained different characteristics. If it was homogeneous it wouldn’t be useful. We had to work with a broad diversity of environments in order to test several models and select the best to apply in the entire Amazon region, where we identified 299 kinds of aquatic ecosystems.

At the same time, the [U.S.-based environmental conservation group] Nature Conservancy and NatureServe [an international network of biological inventories] developed a terrestrial ecological classification based on landforms, soil type, vegetation and climate.

They identified 423 terrestrial ecosystems in Amazonia. Conclusion: this biome is more diverse from a terrestrial than an aquatic point of view.

This is also an approximation, because there are many animal species that move around a lot.

But with the two models I can decide what to preserve. If I can preserve a representative, functional and resistant sample of the 299 aquatic and 423 terrestrial classifications, theoretically I’m preserving the heterogeneity and biodiversity of the Amazon.

Q: But how are the priority areas chosen?

A: By the best cost-benefit ratio, keeping the area to a minimum size based on a purely economic decision.

Q: How are cost and benefit measured?

A: Benefit is opportunity: for example, protected reserves and indigenous lands, where the cost of preserving is lower. Cost is threat: deforestation and the advance of the agricultural and livestock frontier are the terrestrial costs.

Within an ecosystem classification, the model chooses the area most distant from those threats, which drive up conservation costs.

It’s a software that assembles puzzles of thousands of micro-basins, each of which has its attributes, such as belonging to this or that aquatic or terrestrial classification, the proximity of roads, or the current level of degradation.

It avoids red zones, where costs are high, and selects the sample of ecosystem in a protected area. It makes thousands of cross-references to find the best solution.

We didn’t invent anything; we use methodologies from scientific research. The national water agency [ANA] carried out a similar project, the “strategic map of the rivers on the right side of the Amazon river”, which gave us a sense of certainty.

But there are cases where I don’t have options. Aquatic ecosystem 214, for example, only occurs in one spot. If it is affected, it would definitely be lost. It is irreplaceable. And there are many irreplaceable areas.

Q: So what can you preserve?

A: We set a target: preserving 30 percent of each kind of ecosystem. But it’s only an exercise; the actual decision depends on who is at the table discussing the parameters.

Thirty percent of the aquatic ecosystems, plus 30 percent of the terrestrial ecosystems, theoretically adds up to 60 percent. But because there is some overlap, it’s actually 55 percent. That’s reasonable, because today 40 percent is covered by nature reserves and indigenous territories. It’s an arbitrary number, but it has some technical value.

Q: An index to mark the negotiation?

A: That’s where we started: we reached a definition of what we want, in response to the challenge of the hydropower plants.

If we agree that an area must be preserved for the future, it has to have a free connection with the main channel – the Amazon river – since the watershed is unified. Conservation depends on the connectivity of waterways. If the power industry wants to dam all of the rivers [in a watershed], the future of a living Amazon would be compromised.

But everything is negotiable. Our tool offers the possibility of dialogue, not a pat solution. It’s a platform of strategic evaluation to look at the big picture, contextualise projects and reach decisions based on better information. Tomorrow someone could introduce the question of archaeological sites, of quilombos [communities of descendants of escaped African slaves], etc.

Q: How did the government react to this proposal?

A: The reception is always good, until a specific interest is touched. For us, the ideal was to discuss the entire Amazon basin, but we didn’t manage to organise a forum.

The path to that opened up thanks to a December 2010 inter-ministerial decree, which created a working group to analyse environmental and socioeconomic aspects, seeking to subsidise the selection of areas to exploit for hydropower. That was what we had wanted.

The Energy Research Company [EPE] of the Ministry of Mines and Energy wanted to learn about our tool. We trained people in the ministries. They carried out their analysis.

But two years have already gone by. That’s why we decided to go public with our proposals, before the [hydroelectric] projects on the Tapajós river progressed any further.

Q: And have there been any interesting reactions in the private sector?

A: The directors of an international bank praised our ideas, telling us that they’re scared to death of getting involved in a project and later having to face protests outside the doors of the bank. The BNDES [Brazil’s National Bank for Economic and Social Development] won’t be able to finance everything on its own.

Q: Can you cite a case where this tool pointed to better alternatives?

A: On the Teles Pires river [a tributary of the Tapajós], I found out that they were thinking of building a single dam, bigger than the current one, the Teles Pires dam, without the other two that had been planned, the São Manoel and Foz do Apiacás. It might have been a better alternative, with greater potential and a smaller cumulative impact.

The river has a natural barrier and the problem of connectivity is not such a major issue. There is a myth that small hydroelectric dams have a smaller impact, but if there is a string of them, the aquatic ecosystem is broken up more.