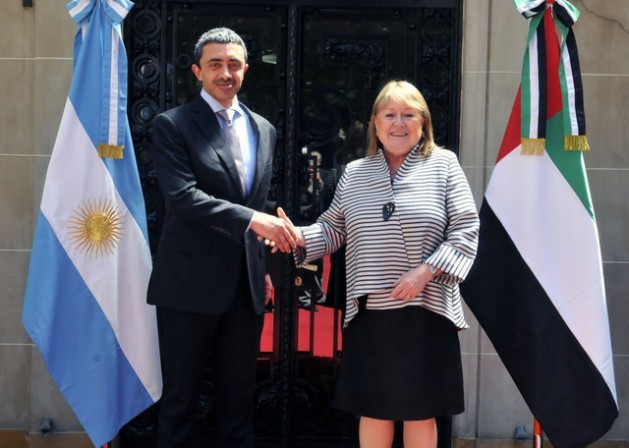 The foreign minister of the United Arab Emirates, Sheikh Abdullah bin Zayed Al Nahyan, and his host, Argentina’s foreign minister Susana Malcorra, outside the San Martín Palace in Buenos Aires at the start of their meeting on Friday, Feb. 5. Credit: Government of Argentina

On Friday, Feb. 5 Al Nahyan and his host, Argentina’s foreign minister Susana Malcorra, signed five agreements on taxation, trade and cooperation in the energy industry, after a meeting with other officials, including this country’s finance minister, Alfonso Prat-Gay.

The meeting in the San Martín Palace, the foreign ministry building, addressed “important” aspects of ties with the Gulf nation made up of seven emirates, an Argentine communiqué stated.

Al Nahyan’s visit took the UAE’s contacts to the highest diplomatic level with the new Argentine government of Mauricio Macri, who received the minister Friday in Olivos, his official residence, less than two months after being sworn in as president on Dec. 10.

After the meeting in the foreign ministry, the Emirati minister also met with Argentine Vice President Gabriela Michetti, and visited the Senate.

The day before, Al Nahyan was named guest of honour in Buenos Aires by the city’s mayor, Horacio Rodríguez Larreta, with whom he met after the ceremony.

In the meeting between Al Nahyan and Malcorra, a tax information exchange agreement was signed, along with an accord between the Argentine Industrial Union and the UAE Federation of Chambers of Commerce aimed at “establishing a joint business council.” 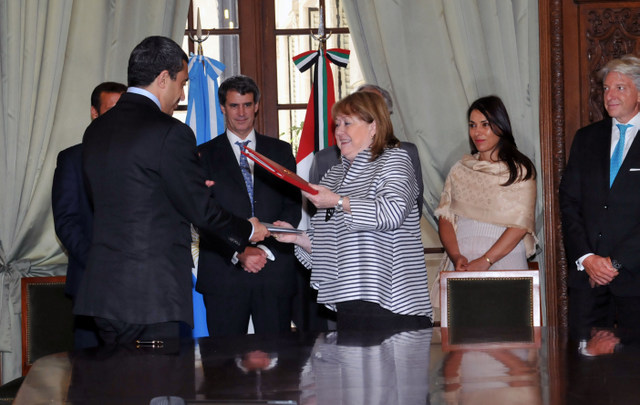 The governor of the southern Argentine province of Neuquén, Omar Gutiérrez, was also present at the meeting, where an agreement was reached to grant a loan to that region to finance the Nahueve hydroelectric project through the Abu Dhabi Fund for Development (ADFD), in the town of Villa del Nahueve.

A four-MW hydroelectric plant will be built in that town of 25,000 people in southern Argentina with an investment of 18 million dollars, through a soft loan, the secretary-general of the Argentine-Arab Chamber of Commerce, Walid al Kaddour, told IPS.

As Al Kaddour underlined, “there is a great deal of room to grow (in bilateral ties), especially taking into account that the United Arab Emirates is located at a strategic point linking the West with the East.”

He explained that products can be re-exported to all of Asia from the Emirati city of Dubai, because “it is a very important distribution hub.”

The population of the UAE is just barely over nine million, “but it can reach a market of 1.6 billion inhabitants, and it has major logistics infrastructure enabling it to re-export products,” he said.

Al Kaddour said the UAE’s chief interest is importing food, “which is what Argentina mainly produces,” although he said the Gulf nation could also buy raw materials as well as manufactured goods.

The UAE at one point imported up to 1,000 vehicles a year from Argentina, he pointed out.

According to Al Kaddour, another aim of the Emirati minister’s visit was “to meet Argentina’s new administration.”

Macri, of the centre-right “Cambiemos” alliance, succeeded Cristina Fernández of the centre-left Front for Victory, who had strengthened ties with the UAE during an official visit to Abu Dhabi in 2013, where an agreement on cooperation in nuclear energy for peaceful purposes was signed.

“The UAE has pinned strong hopes on the new administration in Argentina,” said Al Kaddour. “The last few years have also been positive in terms of building a friendlier relationship.

“The idea now is to move towards concrete things, such as investment projects in different areas, like renewable energy and agriculture,” he added.

In an article sent to the Argentine daily Clarín, Al Nhayan stressed that “the ties of friendship between Argentina and the United Arab Emirates are strong” and the two countries “are united by shared economic interests.”

He added that “we hope to be able to work with the president, and we believe that together we can bring many benefits to our two countries and our people.”

He also emphasised that his country is seen as “the future gateway for access to Argentine products to the Middle East.”

Emirati sources told IPS that the UAE minister and the Buenos Aires mayor discussed questions such as sustainable urban development and solar energy – an area in which the Gulf nation is interested in cooperating with Argentina.

Although it is a leading oil producer, the UAE is considered a pioneer in the development of unconventional renewable energies, which it is fomenting as the foundation of clean development that will curb climate change.

In Argentina, Al Nahyan kicked off his Latin America tour that will take him to Colombia, Panama and Costa Rica through Feb. 12.