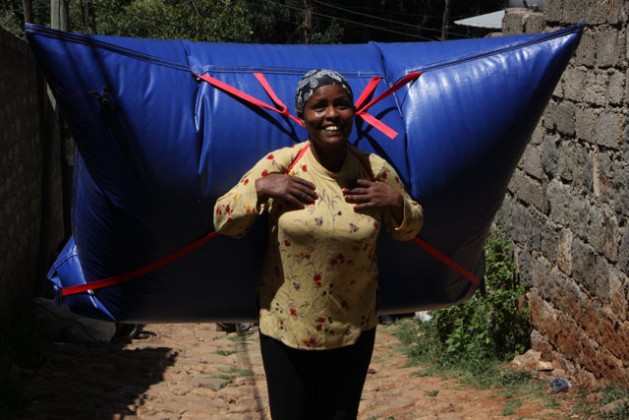 ADDIS ABABA, Ethiopia, Mar 31 2016 (IPS) - Billions of dollars of aid has been pumped into Africa. Yet effective change too often remains an elusive outcome, leading to a vicious cycle: more needs, more aid but still little change. How to resolve this seemingly intractable dilemma?

Biogas could be one part of the solution. (B)energy is a social business venture offering a clean energy solution that not only solves an energy crisis but a social problem too.

Its (B)pack—a nearly 1.5 metre wide, pillow-shaped inflatable blue bag—is filled with biogas from a special biogas digester, a sealed compost bag. Afterwards, the biogas-filled (B)pack can be hoisted onto a back for carrying to a home where it is hooked up to a biogas cooking stove.

German founder Katrin Puetz, 34, built the company’s business model on the idea of empowering local franchisees to sell mobile biogas technology on themselves. This turns them into biogas producers, so-called (B)entrepreneurs, in the words of Puetz, as each gains an income while promoting clean, affordable and sustainable energy.

One such (B)entrepreneur is 32-year-old Zenebech Alemayehu, a single mother with a 9-year-old son, based in a southern suburb of Addis Ababa.

“I sacrificed a lot for this,” says Zenebech inside a large ramshackle shed as a struck match is held to the end of a metal pipe and a faint blue flame springs into life. “When I see it working I am so happy and more motivated.” She puts her fingertips to her lips then toward the flame, a symbolic kiss for her new biogas-inspired business.

The pipe leads outside the shed connecting with a 5 metre long plastic tank—the digester—that takes anything from waste food to goat droppings or those of a larger human form; Zenebech keeps hers supplied from a giant pile of cow dung inside the shed.

Puetz began the project that led to her business while working for Hohenheim University in Stuttgart, Germany, where she realised its potential in Africa as a clean, cheap alternative to cooking on smoky, polluting fires.

After being contacted by Addis Ababa University and invited to move to Ethiopia to develop the technology, she launched (B)energy in April 2014. She remains determined her enterprise remains self-sufficient, despite her technology being a prime candidate for tempting funding—she has already turned down grants from global charities.

“My aim is not to just provide biogas but to show it can be provided without aid,” Puetz says. “This is not just about money; it is about pride—why do we always have to have aid and subsidies for something that can work on its own?”

Puetz’s business model uses social franchising to encourage growth, and is set up in a way easily replicated around the world, with little investment required by local people using locally available raw materials. “It is environmentally friendly, creates entrepreneurs and strengthens communities without charity,” Khartoum-based Waleed Babiker says of why he decided to sign on as the franchisee for (B)energy Sudan. “If you give energy to rural areas they can do a lot with it and develop themselves.”

Babiker originally achieved business success through a chain of eight restaurants in Sudan, and wants to give back to society, especially outside Khartoum where rural households struggle to obtain affordable cooking gas. Cooking with biogas can also mitigate problems that go with more traditional methods, Babiker says. In the western Sudan region of Darfur, for example, collecting firewood exposes women to frequent rape, he says.

Also, smoke inhalation globally from cooking and heating with solid fuels kills about 2 million people every year—primarily women and children—according to the World Health Organisation. The history of biogas in Ethiopia illustrates some of the problems with outside intervention, no matter how well intentioned.

“Biogas was introduced by NGOs as far back as 50 years ago,” says Araya Asfaw, director of Addis Ababa University-based Horn of Africa Regional Environment Centre and Network (HOAREC), and which collaborated with Puetz to test (B)energy’s technology. But, Araya explains, too often NGOs built digesters without adequate promotion: “So either people did not know about biogas or were not interested—it was donor driven rather than demand-driven.”

Also, he notes, NGO programs installing digesters in every household failed because people could not manage the maintenance and effort required. (B)energy, on the other hand, opts for dissemination of its technology through multiple (B)packs supplied by a single digester, which is also more practical and cost effective.

While (B)energy is flexible regarding payments, willing to initially loan equipment to kick-start businesses, the (B)pack is no freebie. “When you give something for free people do not value it; it may end up under the bed,” says Eyobel Gebresenbet, a HOAREC project officer advising those such as Zenebech. “But make them pay and they then want the training, and use it properly.”

At the start of 2014, a pilot project in the town of Arsi Negele, 275 km south of Addis Ababa, demonstrated the need and popularity of biogas in backpacks. By the project’s completion, 26 households were regularly buying (B)packs.

“Now we have established local manufacturing of all the mobile biogas equipment here in Ethiopia,” says 35-year-old Wubshet Yilak, the franchisee for (B)energy Ethiopia. “This is technology designed in Germany, made in Ethiopia.”

One of the main challenges, Wubshet acknowledges, will be convincing local Ethiopians to pay about 12,000 Ethiopian birr (US$600 dollars) for equipment—two (B)packs, one digester, one biogas cooker—although the hope is to make such costs more feasible by using micro-financing. “My family were farmers with 15 cows and we cooked using wood and cow dung,” Wubshet says. “I know the problems of this type of cooking, I think of my neighbours—that is why I want change, so we can have clean energy.”

(B)energy Ethiopia is leading the way in demonstrating the know-how and technology of how to bring to Africa mobile biogas solutions and the business model of selling biogas, Puetz says. Recently the technology was tested by the Ethiopian Conformity Assessment Enterprise and was approved by the Ministry of Water, Irrigation and Energy. A next step is to get the (B)flame—(B)energy’s variety of 3 differently sized biogas stoves—tested by local authorities.

“Logically no one who is struggling to survive is interested in saving the environment,” Puetz says. “People will embrace technology if it is cheaper or makes money for them.”