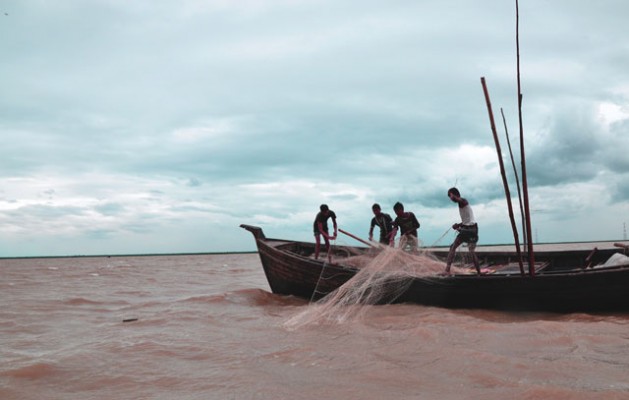 Fishermen are catching hilsa on the estuary of Mehgna River in Patuakhali. Credit: Rafiqul Islam/IPS

DHAKA, Bangladesh, Apr 12 2016 (IPS) - Bangladesh has decided to set up a Hilsa Conservation Trust Fund (HCTF) to protect this fish from over-exploitation due to population growth and effects of climate change.

The United Kingdom’s Darwin Initiative is providing support to Bangladesh’s department of fisheries to establish the fund and enhance the effectiveness of incentive-based fisheries management, according to official sources.

Under the initiative, the London-based International Institute for Environment and Development, Dhaka-based Bangladesh Centre for Advanced Studies (BCAS) and Bangladesh Agricultural University (BAU) have been working with the department of fisheries to reduce threats to hilsa fish and biodiversity in the lower Meghna river.

The director general of the fisheries department, Syed Arif Azad, said they are yet to formulate any instrumentality on how funds will be mobilised for the proposed HCTF.

But, experts say, funds may come from donor agencies like United States Agency for International Development and Deutsche Gesellschaft für Internationale Zusammenarbeit while the government will provide a specific allocation to the conservation fund each year. And this money will be spent to compensate fishermen, conduct research on hilsa and conduct enforcement activities to protect Hilsa fry.

Hilsa is one of the most important single-species fish in the Bay of Bengal. It has traditional importance as every year, people celebrate the Bangla new year with Pathna-Ilish (watered rice with hilsa). More than half a million of coastal fishermen directly depend on it for their livelihood and nearly three million people of Bangladesh are involved in trading, processing, transportation and marketing of hilsa fish.Around 250 million Bengali people depend on it for nutrition.

Once hilsa fish was abundant in the Bay of Bengal and hundreds of rivers in Bangladesh, India and Myanmar, but declined steeply since the 1970s. This decline was due to the impact of climate change — as it affected its breeding ground — and over-exploitation.

Amid fears of a depletion of hilsa fish stock in the near future, the Bangladesh government declared five coastal sites as hilsa sanctuaries, where fishing is banned during its breeding season. Every year, Bangladesh also observes jatka conservation week across the country aiming to mobilise people to conserve jatka (hilsa fry) to boost hilsa production.

Around 1.58 lakh metric tonnes of food grains were distributed to more than 2.24 lakh households of fishermen communities under the vulnerable feeding programme in the last six years, said Bangladesh’s fisheries and livestock minister, Muhammed Sayedul Hoque.

About 40 kilogrammes of rice are being distributed to each household during fishing ban period. Equipment worth Tk 10,000 (US $128) has been distributed to more than 30,000 fishermen to promote alternative livelihood options.

Sayedul Hoque said the government has a plan to increase the existing food grains incentive of 40 kilogramme to 80 kilogramme to support fishermen more during the hilsa banning period.

The government’s scheme to compensate fishermen to restrain them from fishing during banning period is unique in fisheries conservation around the world. Due to various steps to conserve hilsa, Bangladesh has already increased its production.

Dr Abdul Wahab, a fisheries professor of BAU, said once the HCTF is established, its production may show a sharper rise since effective conservation steps would be taken through spending money from the fund.

Hilsa is a sea fish and it comes to rivers of Bangladesh during their breeding period to release eggs. There is no evidence as yet that hilsa can be farmed. The department of fisheries with support from WorldFish took an initiative in 2015 to farm hilsa on pond and caged in open water. Hilsa fry collected from the sea were released in two ponds in Patuakhali, a coastal district of Bangladesh. But this trial was not successful.

According to him, BFRI plans to research the impacts of climate change on production, migration routes and breeding patterns of the hilsa.